New Assessment of Global Forest Resources: Cause for Optimism

If we are to manage our forests wisely for the benefit of current and future generations, we need to understand the situation of the world’s forests and ongoing trends.

The Food and Agriculture Organization (FAO) of the United Nations has gathered data from 234 countries and territories to provide an up-to-date report on about 88% of the world’s forests. The most recent Global Forest Resources Assessment (FRA) showed that from 1990 to 2015, global forested area declined by 129 million hectares (ha) or 0.31% of the world’s forests. Keep in mind, however, that from 1990 to 2015 human populations grew from 5.3 to 7 billion people (a 30% increase) and the demand for food and land increased significantly. (Note: 1 hectare = 2.47 acres).

The largest forest area loss occurred in the tropics, particularly in South America and Africa, while in Asia and Europe there was a net forest gain. North and Central America showed little net change on average.

While this sounds like a lot of bad news, FRA 2015 also shows an encouraging tendency towards a reduction in the rates of forest loss. The rate of annual net loss of forests (i.e. land taken out of forests and turned into something else like houses or agriculture) slowed from 0.18% in the 1990s to 0.08% over the last 5 years. This means the rate of global net forest loss has been cut by 50%, reflecting improvements to sustainable forest management, more land designated as permanent forest, increased assessment, monitoring, reporting, planning and stakeholder involvement and larger areas designated for conservation of biodiversity. The area under international forest management certification schemes, like PEFC, FEC and SFI, increased from 14 million ha in 2000 to 438 million ha in 2014. 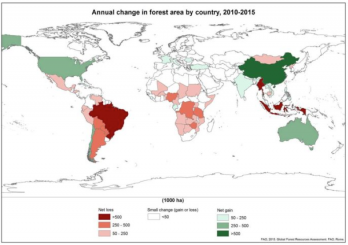 In the U.S., forest area increased by 8 million ha between 1990 and 2010. Much of this increase (5 million ha) was seen in the primary forest category which the FRA defines as “Naturally regenerated forest of native species where there are no clearly visible indications of human activities and the ecological processes are not significantly disturbed.” Planted forest also increased over that time by about 8.5 million ha but these gains were largely offset by a net loss in the other naturally generated forest category which is a forest that shows clear signs of human activity.

Biomass and carbon stocks in forests are important indicators of forests’ productive capacities, energy potential and capacity to sequester carbon. The total amount of carbon stored in above and below ground biomass (including the soil) in U.S. forests rose from 37,400 to 41,200 million metric tonnes between 1990 and 2015.

In Canada, forest area decreased from about 348 to 347 million ha between 1990 and 2010 and then stayed roughly the same in 2015. As in the U.S., the largest decline (roughly 12 million ha) occurred in other naturally generated forest but this was mostly offset by an increase in planted forest. The total amount of carbon stored in above and below ground biomass (including the soil) went from roughly 50,600 to 50,400 million metric tonnes between 1990 and 2010. Data from 2015 are not yet available.

Forests provide decent livelihoods and deliver vital long-term ecosystem services, such as clean air and water, conservation of biodiversity and mitigation of climate change. These far-reaching contributions of forests to the well-being of humankind have been increasingly recognized over the last 15 years and are driving the worldwide move toward sustainable forest management and away from deforestation.