Technology Trends from the InfoBlog
March 18, 2016

New Xerox Cut-Sheet Color Inkjet in the 'Zone of Disruption'

With the announcement of the Brenva HD production inkjet press, Xerox is showing its first product to be jointly developed from start to finish by the combined Xerox and Impika development teams. The device is a cut-sheet color inkjet printer capable of speeds of up to 182 letter/197 A4 images/min. At first glance, it looks like an iGen, and though it is built on an iGen frame, it will become clear that under the covers the differences are extensive.

The initial application target is likely to be black and white to color conversion, as well as applications like transaction, direct mail, and books because the device will support uncoated stocks (regular and inkjet treated) at launch. The supported media range is uncoated stocks from 60 to 220 gsm. Supported finishing at launch will be the BDFNX signature booklet maker and the Xerox Production Stacker (which can handle 5,500 sheets and is designed to be unloaded while running for uninterrupted operation).

The Brenva HD production inkjet press will be available later this year at a list price of $649,000 (this includes one sheet-feed module, a FreeFlow Print Server, the printer module, and one Xerox Production Stacker). Two early customer sites (one in Europe and the other in the U.S.) will be installed by April 1st. Order taking and fulfillment will start in Europe first at drupa (May 31st to June 10th, Düsseldorf, Germany), where Xerox will show two systems. For the U.S., order taking will start at Graph Expo (Sept. 25-28, Orlando, Fla.). 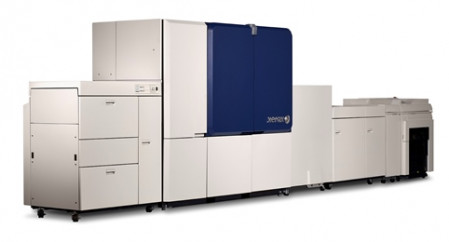 Another view of the Xerox Brenva HD production inkjet press.

At the same time as the Brenva announcement, Xerox also announced a new roll-fed inkjet product called Trivor. Xerox’s Trivor 2400 is capable of 551 ft./168 m./min. speed in color and 656 ft./200 m./min. in monochrome. Its Xerox IJ Print Server was developed in partnership with EFI and will handle multiple data streams. Availability and list price will be revealed at drupa.

InfoTrends Opinion
With Xerox’s Brenva, another product joins the z, and this time it’s a cut-sheet offering. This definitely heats up the competition since prior to this announcement only Canon had a true cut-sheet B3-format product in this space. Leveraging iGen for some components certainly helped Xerox get this product to market more quickly, yet in that sense they made a similar decision to what Canon did with the Océ VarioPrint i300. Both products can benefit from feeding and finishing components that already exist and can be integrated into the platform. The focus on uncoated stocks at the start makes sense, since there is a lot of opportunity for moving black-and-white volume from cut-sheet monochrome toner devices, particularly in applications that leverage a pre-printed form.

Potential buyers and early users will certainly push hard for coated stocks, but as with other potential features, there is a lot more that can (and will) be added to the Brenva platform in the future. This announcement is a good step for Xerox because it reinforces its inkjet presence in the Zone of Disruption (where it already competes with Rialto) and increases the already significant market activity around inkjet.

Get in the Game: Printing Opportunities from Secondary Schools

Pantone Introduces Its 2023 Color of the Year
END_OF_DOCUMENT_TOKEN_TO_BE_REPLACED