Technology Trends from the InfoBlog
October 10, 2016

What’s Next for Graph Expo?

Graph Expo’s first visit to Orlando can be considered a qualified success, in part based on the low expectations that most exhibitors had for the show. It followed drupa, and a drupa year will always be a challenge for Graph Expo. What the future holds for this venerable show is up for discussion. 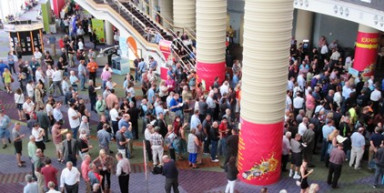 Let’s first consider attendance in Orlando. Thayer Long, the Graphic Arts Show Company (GASC) president, said in a WhatTheyThink interview that the number of visitors (including booth staff) exceeded 13,000. This is down significantly from Graph Expo 15 in Chicago, but is more or less in line with a reduced show that had at least 30% less exhibit space than in 2015.

Another factor is cost. Chicago is a great city, but it is expensive for exhibitors not just for the hall space but for the related costs including booth set up and extras (for example, food and drink at a press conference or reception) as well as downtown hotels, restaurants, and taxis. Orlando, though hot and steamy, provided a lower cost experience in many ways while also offering a range of restaurant and entertainment options.

Ultimately it is about the quantity AND quality of audience. Going into the show I thought that the organizers would be delighted to get 15,000 attendees, but 13,000 is not too shabby all things considered. Exhibitors’ reports of seeing new leads that previously might not have trekked to Chicago were encouraging, though the crowds I saw seemed mainly concentrated in the big booths up front. Smaller exhibitors may not have gotten nearly the traffic they had hoped for.

All in all, 13,000 seems like an acceptable result. However, in comparison to SGIA (only the week previous in Las Vegas), Graph Expo’s size and buzz felt like a letdown. So, the big question facing the show’s organizers is “What’s Next?”

Looking further out, 2020 will be another drupa year and likely create big pressure on the vendors, as well as the GASC. With digital printing expanding well beyond general commercial printing, many Graph Expo exhibitors are also taking space at other shows to reach their target audiences. Canon, EFI, Epson, HP, and others now regularly exhibit at one or more other shows that occur around the same time as Graph including SGIA, Label Expo, and Pack Expo. Trade show budgets aren’t necessarily increasing, but instead they are being shifted and stretched in many cases. Attendance at these shows have been growing or holding steady. 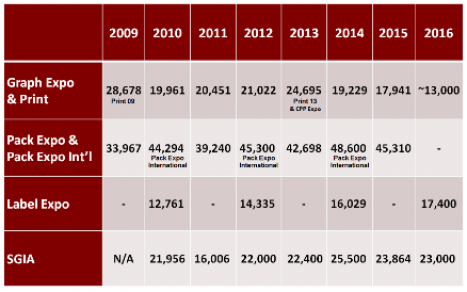 After that, what comes next? I believe that short of a radical rethinking of the show (see more on this below) that varying the show location makes the most sense. A West Coast swing to Las Vegas or Anaheim in 2020 could fit nicely in a rotation with other cities. A regular return to Chicago clearly is appealing (as long as reasonable dates can be secured — overlapping with the Jewish high holidays in 2015 was not a good solution). Orlando could become a regular stop but New York (very expensive) or Philadelphia could be attractive East Coast venues as well. Even Miami could be an option since it would be a more attractive draw from South and Latin America. Such a move would encroach into territory traditionally held by Graphics of the Americas, but it may be inevitable.

Becoming a traveling show assumes that the event’s organizers are content with the continued downsizing. Are there other potential options? Certainly there are, but they would require some adjustments that may not be possible given the ownership, economic factors, and logistical constraints of the various shows. Some possibilities include:

In the end, I believe that rotating locations in the U.S. is the most likely option, though it is certainly not the most imaginative one. The simple fact facing GASC is that consolidation in the graphic arts market and the expansion of production digital print into adjacent applications has resulted in fewer traditional attendees and more overlapping events. This trend is unlikely to change soon and could best be resolved by mergers of existing shows.

The next few months will be very interesting ones as exhibitors assess the results of Graph Expo 16 and consider how their marketing dollars are most effectively allocated in the coming years. To be seen is whether show organizers look at this opportunity creatively or instead fall back to more conservative strategies.

From the Editor: A Grand Display of Possibilities
Comments
Subscribe
PRINTING United Expo

Pantone Introduces Its 2023 Color of the Year
END_OF_DOCUMENT_TOKEN_TO_BE_REPLACED