A One-Man Mission to Prove the Possibilities of Print 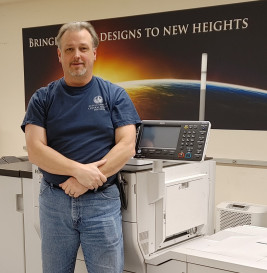 Walter Ryan, Print Shop foreman for the City of Bangor, Maine, was born and raised in the "Pine Tree State." Growing up and attending school in the town of Orono, he headed southwest to Auburn for his graphic arts studies, enrolling in Central Maine Tech (now Central Maine Community College).

While Ryan was initially interested in photography, after looking into the training and career path, it didn’t feel like quite the right fit. A high school guidance counselor suggested a job shadow at some local companies, and a serendipitous placement at commercial printer Furbush-Roberts instilled in him a lifelong love of print.

“While I was there, they had an old Heidelberg windmill letterpress, and they were still using lead type,” Ryan recalls. “That fascinated me, and I ended up switching [majors]. My major was actually in the print shop itself, on the press floor. Stupidly, in hindsight, I took prepress as a minor, and to be totally honest if I would have known what I know now I would have done a minor in design instead.” 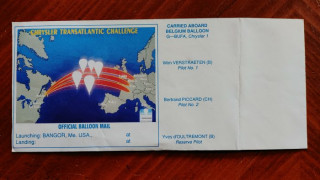 The envelope Walter Ryan created for the trans-oceanic balloon race in 1992.

Ryan’s first stop out of college was Quality Printers, a small, family-owned company where he ran a two-color Multigraphics 1650 and learned a lot from the owner’s son. He recalls a memorable, once-in-a-lifetime project: creating special four-color envelopes for the first-ever trans-oceanic balloon race, which lifted off from Bangor en route to the U.K. in September 1992.

“We had to run them through the press twice, because we only put down two colors at a time,” Ryan reminisces. “To try and do that in four passes would have been nuts. We did wish we had a four-color press at the time, but they turned out well and the team was proud. They sold them as Air Mail envelopes, so you could actually send mail with the balloonists over to the U.K. That was one of the most fun jobs I’ve done. It was absolutely amazing.”

Next, Ryan landed at Jiffy Print, another family-owned venture, where he remained for 13 years. At Jiffy he was the “black ink guy,” thanks to his talent for laying it down better than anybody else.

Thrown Into the Deep End

In 2005, Ryan started at the print shop for the City of Bangor, walking into a very different shop than the one he runs today as foreman.

“We’re located in the basement of City Hall,” he says. “When I arrived, they were in the process of gutting it to redo it, so I wasn’t sure what I was getting into.”

With his boss out at the time following back surgery, Ryan was thrown into the deep end, running some of the equipment on his own.

“They gave me a bit of instruction, but after that it was pretty much all me,” he says, “and when my boss came back she taught me the ropes on the printing press. She retired four years after I started, and that’s when I put in for her position. She wrote me the most amazing letter of recommendation. I had never had a letter like that before. It was beautiful.”

And so, Ryan took over the top job as Print Shop foreman for the City of Bangor. The promotion, however, was coupled with a blow, as the top job became, essentially, the only job.

“It was a two-person full-time shop, but when I took over, they then made my old position a part-time position, so that made things a little more difficult,” he says. “But I made do. I started making the changes I wanted to. I felt during the first four years that there was much more we could be doing.”

The next challenge was fulfilling that goal to be doing much more than business cards, letterheads, NCR forms, and property tax bills as a one-man operation. Luckily, Walter Ryan loves a challenge.

“When I took over, I went department by department and said, ‘Challenge me. Show me what you’ve got.’ After about two years, this place just started taking off, and here I am 15 years later. I have the digital press that I wanted in here [a Ricoh Pro C5100s], and on top of the work we were doing before I’m doing all the envelopes. I’ve done more mailers, and a couple of years ago I designed my first bus wrap for the police department, turning the bus into a giant cop car. I’ve done about five of those now.”

In addition to printing for City Hall, Public Works, Parks and Recreation, and the airport, the in-plant does all the printing for Bangor’s school district. Ryan handles as much of the printing and design as he possibly can in-house. The city’s recent rebranding (Ryan was on the branding committee) means his handiwork is now all over the city, since he helped design the logos and perfect the color schemes.

As he reflects on how far the in-plant has come, it’s clear that Ryan has worked tirelessly to demonstrate to the city just how many amazing opportunities there are with print.

“Now that I think about it, there’s just so many things that have surprised people — things they didn’t think we could do,” he says.

When it comes to communicating the merits of print, showing is better than telling, and Ryan thought up an innovative way to showcase what departments were missing.

“A few years ago, I came up with a small pocket folder design to help give all the departments an idea of what we can do,” he says. “I put all the information in it, and I sent around a swatch book of paper with it too. I would go to all the departments and the schools that I deal with, handing them out to the people who were ordering from me, so they got a sense of what else they could be doing.”

He says that ability to really prove what he could do for the city is perhaps his biggest success.

His greatest challenge, on the other hand, perhaps unsurprisingly, is proving the need for a second person.

“Yes, I can do it all,” he proclaims. “But I’m not going to last forever. If another person was here, things would get done a little bit better, and we could actually get more through here. With COVID, it’s become even more challenging. So, it’s still just me, for now.”

Staying motivated can be tough for all of us, but as a one-man shop, how does Ryan stay driven? For one thing, he loves a challenge; give him an ambitious project and he’ll get the job done.

Ryan was hit with a family emergency earlier this year when his wife went into the hospital. Printing stopped with the exception of a few urgent jobs so Ryan could focus on his wife, whom he describes as his rock. During that time, his coworkers kept him going.

“After one of the worst times of my life I was experiencing so much love from coworkers, it kept me motivated,” he says. “I love this job, and I love the people here. I did before February, but even more so now thanks to the people that were really there for me.”

Ryan is now eager to spend more time at home with his wife, but at the same time his love for print and enthusiasm for the print shop hasn’t waned. The couple has two grown-up children — a daughter and a son — and grandchildren, and they have plenty of pandemic-related making up for lost time to do.

However, family isn’t Ryan’s only outside-of-work interest. A keen gamer, he favors adventure games like Ingress and World of Warships. “It’s a hobby, but it also allows me to disconnect,” he explains. “I can switch gears from everything here, so it really takes me out of reality and allows me to unwind.”

And if anyone deserves to relax and unwind, it’s Bangor’s one-man in-plant dynamo, Walter Ryan.