First ACUP+ Conference in Three Years is a Success

After two years of virtual conferences, higher-ed in-plant managers finally got a chance to get together in person again when the Association of College and University Printers held its recent conference in Vancouver, Washington.

The attendee count may have been down from previous conferences, but there’s no question the first in-person Association of College and University Printers (ACUP+) conference in three years was a welcome and vibrant affair. The masks and Zoom screens were gone and in their place, hugs and handshakes abounded as managers greeted old friends they had last seen at ACUP+ 2019. 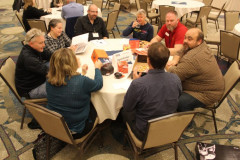 In April, more than 40 higher-ed and K-12 managers from 34 schools convened in Vancouver, Washington, for ACUP+ 2022. Despite the long separation, managers fell easily into conversation with old friends and welcomed 19 first-time attendees as well. From the opening reception to the final gala awards dinner three days later, the networking never stopped.

Like past ACUP+ conferences, this one included a vendor floor, where 17 companies displayed their products and services and chatted with attendees. There was also an in-plant tour of sorts; in lieu of a 90-minute bus ride to Corvallis, Oregon, the managers of Oregon State University’s in-plant presented a virtual shop tour that showed off their impressive foiling, laminating, and die-cutting capabilities. OSU went on to win seven ACUP+ Production Awards (as well as both Best of Show and People’s Choice honors) in a ceremony that honored 10 in-plants for their accomplishments. 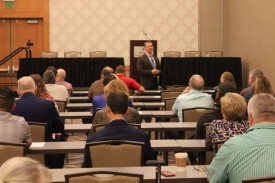 The conference started strong with keynote speaker George Carroll, who offered ideas for staying positive in changing times. Limit the negative news coming into your life, he cautioned; it effects your outlook on life by causing your brain to seek out similar news. Change bad habits, he said, by changing whatever triggers those habits. Instead of spending your lunch break doom scrolling, start a different activity at that time. One exercise designed to show how multitasking is actually just “task switching,” which decreases productivity, was particularly convincing. Carroll had attendees on their feet repeatedly, inspiring shouts of enthusiasm that continued through the rest of the conference.

In-plant managers listen to one of the ACUP+ speakers.

Starting off the second day was IPI Editor Bob Neubauer, who presented new data on the higher-ed sector of the in-plant market, noting which services are on the rise (graphics installation, variable data, copier fleet management, embellishments) and which printed products have increased in demand (floor graphics, wall/window clings, direct mail). He cited examples of in-plants that have added new capabilities like inkjet, garment printing, engraving, and automated cutting, and talked about the ways COVID had altered in-plant procedures.

All three days of the conference included roundtable discussions, when managers freely discussed topics of importance to them, such as marketing their services, wide-format substrates, copier fleet management, MIS, student workers, and more. Attendees also participated in a hands-on workshop, led by MacTac and Plasticade, in which they were able to apply window, wall, and floor graphics themselves. They were shown how to peel off the backing, apply graphics smoothly, and use squeegees to push out the air. 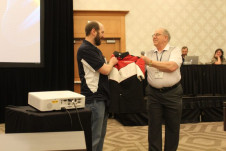 At the ACUP+ business meeting, Tom Lydon of Bucknell University formally stepped into the role of president, taking over from Bob Donahue, of Franklin University. The board revealed that the 2023 conference will take place April 2-6 in Lincoln, Nebraska, the location originally intended for the 2020 event. It will include a tour of the University of Nebraska’s large in-plant, which installed a six-color, 40˝ Manroland 706 PLV HiPrint perfecter press in 2019 and is now looking into production inkjet equipment.

Watch for more coverage of ACUP+ in the weeks ahead. 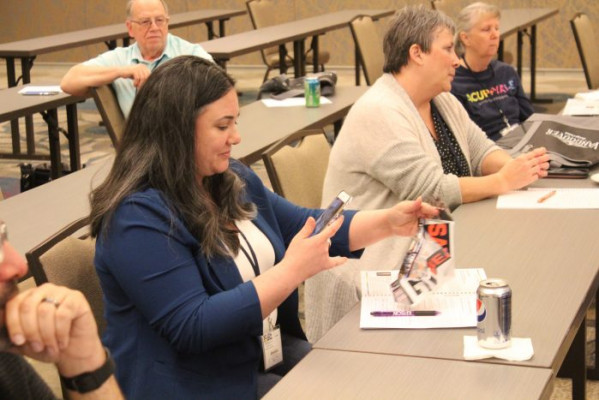 Jessica Anderson (Kishwaukee College) photographs one of the impressive pieces printed by another in-plant. 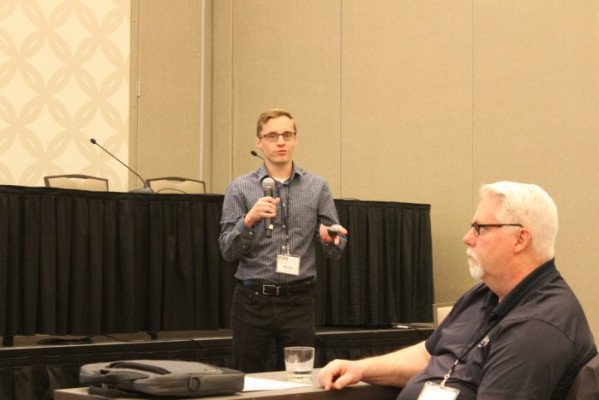 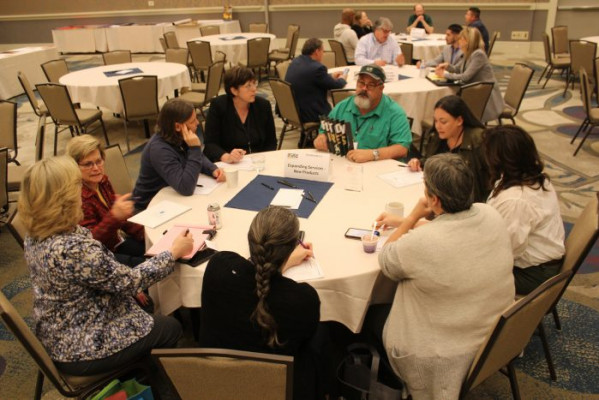 Each day of the conference featured time for roundtable discussions. 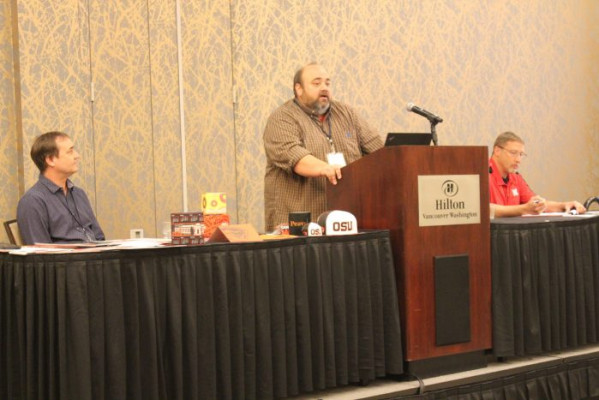 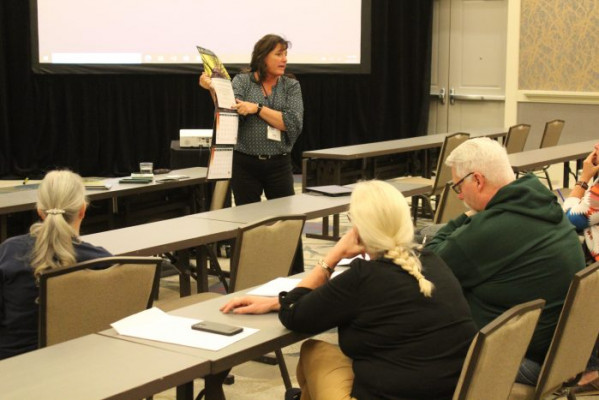 Laura Lockett of Sacramento State shows off a calendar her in-plant uses to market its services. 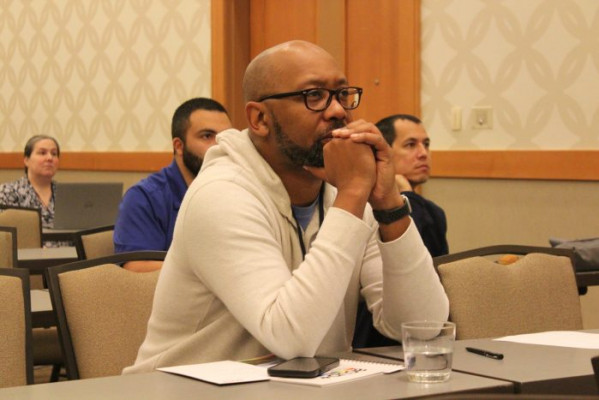 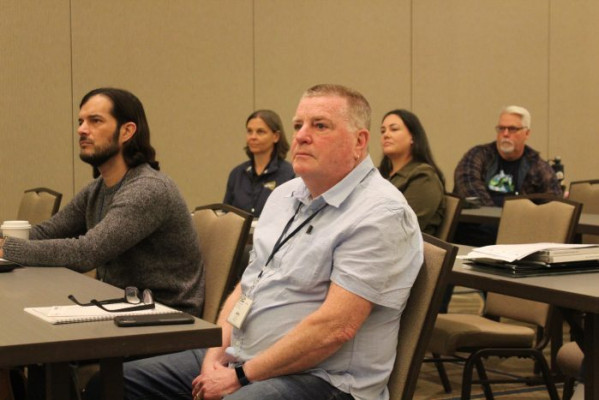 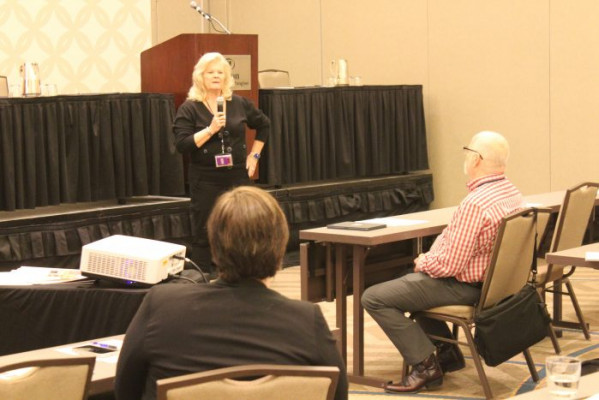