The beginning of a pandemic is never the ideal time to start a new job, but Donna Horbelt is not one to be deterred. After directing the in-plant at the University of Texas Health Science Center in Houston for 12 years, she was ready for a new challenge. So, as the world locked down last April, Horbelt made the move north from Houston to West Sacramento, Calif., to become the new director of Repro Graphics at the University of California, Davis.

The 18-employee in-plant had been without a director since the untimely death of former director Brian Wadell from cancer in May 2019. Upon her arrival, Horbelt immediately set to work. Among her first targets: updating the in-plant’s digital printing capabilities. The shop’s 13-year-old HP Indigo 5500 was on its last legs, she says, noting that it was down for maintenance about 40% of the time. The 5500’s unreliability, combined with its slow 33-ppm average speed, had been forcing the in-plant to outsource a lot of work.

Horbelt took a closer look at all that outsourced work and the money being spent on it and asked, “If I had better equipment, what could I have done here?” Her conclusion: “About 40% of the work we were outsourcing, I could bring back in-house.” 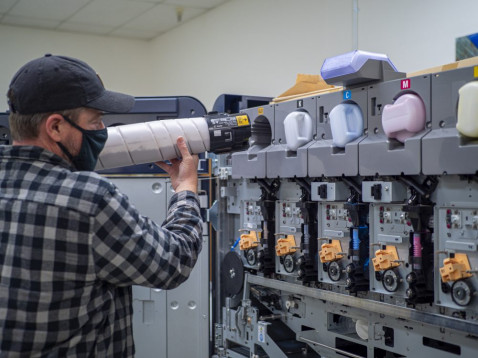 So the search began, culminating last December with the installation of two Xerox Iridesse production presses. One came with white, clear, metallic, and gold specialty dry ink capabilities, a booklet maker, and the ability to feed 13x40˝ sheets. The other has a high-end stacker and two-up punching capabilities on 11x17˝ or 12x18˝ sheets. Both are EFI Fiery driven, and the in-plant plans to add Xerox FreeFlow Core to automate process steps and improve variable data printing capabilities.

The new digital presses, which replaced both the HP Indigo 5500 and a Canon imagePRESS 7010, were purchased with money from an equipment replacement fund that Wadell had built up prior to Horbelt’s arrival. These are the first pieces of Xerox equipment the in-plant has installed, though Horbelt had ample Xerox experience at UT Health. So far, she’s been very happy with the 120-ppm presses.

“I increased my productivity by 242%,” she proclaims, adding that click charges and maintenance fees have gone down 33%.

“I was just blown away by the quality that came off the Iridesse,” Horbelt enthuses.
In addition to the redundancy benefits of having two digital presses calibrated to match each other, she points out another key reason for doubling up on Iridesses.

“I need the capability of being able to split [long-run] jobs when they come in,” she says. “This way I can meet customer deadlines.”

This has allowed Repro Graphics to print the UC Davis Magazine in-house — a 48-page-plus-cover publication that was previously printed with offset. With a print order of 1,250 magazines, the in-plant will run those 35,000 impressions as 13 four-page forms, and do the square-back binding in-line.

To convince the customer to let the in-plant print that high-profile job, Horbelt printed a proof of the previous issue on the Iridesse and showed it to the customer next to the offset-printed issue.

“They were blown away by the color quality,” she reports. “They thought it looked a little better than the job that we had printed outside.”

Another job the in-plant wouldn’t have printed previously on the HP Indigo 5500 was a recent run of 35,000 postcards. The two new printers got them done in a day. The shop can now bring three-panel brochures back in-house, too, thanks to the long sheet-feeding capabilities.

Horbelt admits it’s been difficult, during COVID-19, to get customers interested in the Iridesse’s white, clear, metallic, and gold specialty dry ink capabilities.

“It’s hard for me to show what we can do on a Zoom call,” she laughs.

But she thinks that eventually Athletics, Development, and Alumni Relations will want to embellish their printing with these dry inks.

“The metallic gold is really beautiful,” she praises. 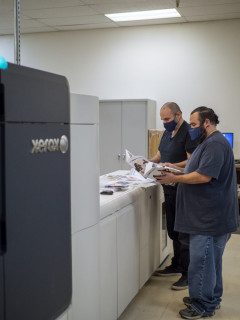 The in-plant has printed sample business cards using the gold and clear inks in preparation for a university rebranding that is now taking place.

“Rebranding. That’s a print shop’s dream,” she remarks. “It brings in a lot of work.”
In addition to the new production devices, the in-plant has been busy in the wide-format area. Repro Graphics took over all of the printing and installations for the university’s sign shop from Parking Services in October. It added a roll-fed 60˝ Mimaki UCJV300 print-and-cut device and a Mimaki JFX200-2513 flatbed printer, the latter being the fulfillment of one of Wadell’s dreams for the in-plant. It allows the shop to stop mounting and instead print directly onto rigid 98.4x51.2˝ boards up to 1.97˝ thick.

After a year as director of UC Davis Repro Graphics, Horbelt is settling into her new role nicely. Though she traded in Houston’s floods (and arctic winters) for California’s wildfires, which filled the skies with smoke during her first months in the state, she’s still happy with her decision to move north.

“I absolutely love my job,” she says.