Are You Trying to Fly Under the Radar?

They are eternal battles: darkness versus light, secrecy versus sharing, ignorance versus knowledge. For many in-plants, for whom communicating their value has become essential, data can be the key between being known and being forgotten. Despite the extra burden of preparing data, and the vulnerability of presenting it, savvy in-plants utilize the power of reporting to prove their worth.

To illustrate the value of reporting regularly to upper management, we spoke with two in-plant managers: Eric Pro, manager of the Mail and Copy Center for the American College of Physicians; and Al Goranson, director of Print and Mail at Western Carolina University.

Goranson’s shop, located in Cullowhee, North Carolina, has 12 employees, three of whom are dedicated to the mailing operation. Pro’s in-plant, just down the street from the Liberty Bell in Philadelphia, is smaller, with a total of four employees. Both shops are fully digital: Pro’s features Canon equipment — a varioPRINT 140 for black-and-white work and an imagePRESS C9010VP for color. Goranson’s in-plant runs Ricoh equipment — two Pro C7100 printers, as well as a Pro C5200S and a Pro 8200S. It also utilizes a Roland DGA LEJ 640 flatbed printer and a Roland VG2 roll-fed cutter/printer, along with a laser engraver, a dye-sublimation device, and a CNC flatbed cutter.

Both managers regularly report to management. Pro says he reports monthly, using a “standardized reporting mechanism.” The first part of his monthly report presents economic and financial information, and includes data on everything the shop does, including labor hours and materials used. The report’s second section presents straight data “with caveats,” says Pro, noting this is his chance to provide context with the data, with a view toward the future. Pro says the key value of providing regular updates is that “there are no surprises,” as there might be with only annual reviews.

Goranson says he also submits reports to management monthly, providing “a snapshot of finances, the type of work we’re doing, and a review of costs.” This data is supplemented by weekly meetings. His reporting includes key metrics — particularly profit-and-loss figures, presented in monthly and year-to-date displays. Year-to-date reporting is essential at colleges and universities, he insists, noting the academic year presents inherent peaks and valleys.

Both Pro and Goranson present data comparing their shops’ prices with those of outside vendors. Pro says his in-plant works in conjunction with the organization’s graphic services department and has first right of refusal on jobs. Additionally, he notes that the organization’s building has nine tenants for whom his shop regularly does work. This, he says, keeps him apprized of prices, and helps illustrate his in-plant’s strengths and weaknesses. 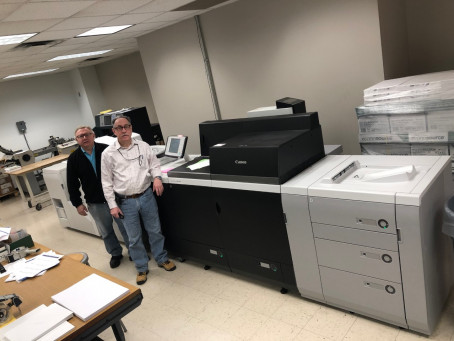 At the American College of Physicians’ in-plant, John Stelluto (left) and Eric Pro stand with the shop’s Canon imagePRESS C9010VP.

Goranson says he reaches out to other in-plant printers, gaining insight from their benchmarks. He says the universities from which he uses data are larger than Western Carolina University, thus reflecting “who I want us to be.” He trusts the prices of these schools’ in-plants because they’re “doing the right things.”

Goranson says his shop finds value in looking at its monthly print volumes as compared to purchases, particularly to calculate spoilage, which can be hard to capture. He reports making progress in this area, measuring inventory versus sales. Another data project for his shop is to measure receipt of jobs via email versus those coming in through the online portal.

While the reporting of document-focused work is relatively straight-forward and comparable, Goranson says reporting of what he calls “installation-based, one-off jobs,” requires particular attention. He says this is because these jobs, which can include routed acrylic plaques and wide-format murals, are more complicated, and can cause prepress backlogs and high use of employee time.

To highlight major accomplishments of his in-plant, he says his shop has taken advantage of the university’s internal award system and nominates staff for work that goes above and beyond.

To show “peaks and valleys in production,” Pro says he has collected data since 2004, keeping track of labor, volumes, and the number of pieces produced. He says this data can be overlaid with information about the organization, which can demonstrate, for instance, how shifts in marketing or recessions can affect the in-plant operation.

“It helps people understand the history,” he says. Data is also useful, Pro adds, because it can help keep the shop relevant and minimizes the need for “selling” value to management. Pro says his in-plant has conducted customer satisfaction surveys, which brought adjustments to the education of new hires, who weren’t aware of some of the shop’s capabilities. He says every time the shop grows, through increases in capacity, capabilities, or efficiency, he “makes sure it is shared with management.”

“Management responds really well to data,” says Goranson. He chooses to use visuals — pictures and graphics — to convey key information. He believes that collecting and reporting data about his in-plant has been essential in helping it grow. He shares that in a recent victory, he used data to convince management to add a staff member to his shop, even amid a hiring freeze. “We wouldn’t have been able to do that without the data,” he contends.

For Pro, reporting has been essential in educating management about where he sees the in-plant heading, and helping them understand how that fits with the broader direction of the parent organization.

“They know where I’m going,” he says, “and what I purchased.” He feels in-plants need to be progressive about the approach to sharing data.

“We can’t push, but need to educate,” he says. In doing so, he believes in-plants can demonstrate their value.

For both Goranson and Pro, reporting to management is a core competency. They both advise those in-plant managers who attempt to “fly under the radar” to change their approach, letting the light of knowledge, powered by data, illuminate the inner workings of their shops.

Data is essential, stresses Pro, to proving you can do the work less expensively in-house, and for keeping the shop out of “a position of examination.”

“If you fly under the radar, you’re going to lose that battle and disappear under the radar,” Goranson says. By not being visible by way of your data, “an outside vendor will come in and you will not be at the table,” he adds. “You will not have a say.”

Related story: What Should You Tell Upper Management?

How To Outsource-Proof Your In-plant

Facilities Management: Be On Guard