The Frisco Independent School District Print, Mail and Sign Center is a busy in-plant. Located just north of Dallas, in Frisco, Texas, the shop processes more than 2,500 print jobs every day in its two-shift, 18-employee in-plant print operation. This comes out to an average of 10 million impressions per month, plus as many as 1,000 signs per month in its signage division.

“Our volume increased dramatically since 2012,” declares Jason Almand, manager of print services and operations for the in-plant.

That was the year the shop took the first steps toward automation as its volumes began growing in response to the district’s rapid expansion. With that growth came the realization that the manual way of processing jobs just wasn’t going to work anymore. 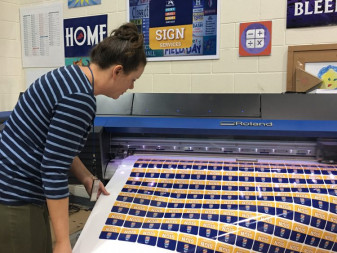 In the sign shop, Sabrina Steinberger checks a print emerging from one of the three Roland eco-solvent printers.

“We were doing everything by hand, basically,” says Almand. “Teachers and staff would submit orders with a form, and would attach their hard copy and send it to us through inter-office mail, where we would scan it and make copies. We wanted to get away from that and go with a Web-to-print system. We didn’t know what we could do, but we knew we needed to make a change.”

That change, he says, ended up being the WebCRD Web-to-print platform from Rochester Software Associates (RSA), which automates ordering, fulfillment, job ticketing, production management, and chargebacks. The Print, Mail and Sign Center installed that software in 2012, and immediately realized just how much it had been missing out on.

“We were still kind of green [to automation] when we first started looking,” says Almand. “We didn’t know what it entailed; we knew there was reporting and a way to submit through the Web, but that was it. But once we started demoing, we finally realized all the job ticket information came over when the order was placed, and as we went along, we learned more and more of what it could do.”

Sherri Broderick, manager of Print, Mail and Sign Services, notes, “You buy into something, but in hindsight you don’t realize the capabilities far outweigh what you originally anticipated for a Web-to-print platform. The more modules we added, the more functions we added, the more we enhanced productivity. It has changed the way we do our production. We couldn’t capture as many impressions without this automation.”

While WebCRD was the starting point for automation at Frisco ISD — allowing the shop to run reports, retain files for easy re-ordering, and automatically price jobs — the in-plant quickly realized it wanted to go even further. Two years after implementing WebCRD, the in-plant installed QDirect, also from RSA, which controls and automates workflows, routes jobs, and manages output. The goal, says Almand, was to reduce the touch points on individual jobs even further.

“This gave us the option to where it can automatically route jobs to a particular queue on the printer based on job properties, and can restrict certain jobs as well, such as preventing a color job from going to a black-and-white printer,” he says. “It helps reduce mistakes, and led to less touches by our operators, so they have more time to do other things.”

RSA’s software allows shops to upgrade functionality by adding modules — essentially adding feature upgrades without needing to purchase or install entire software packages. After QDirect, the next upgrades the in-plant added were AutoStock and Dynamics. Auto­Stock provided the ability to manage the paper inventory and printer supplies automatically within the system, while Dynamics added the ability to provide variable data and template-based options for users. 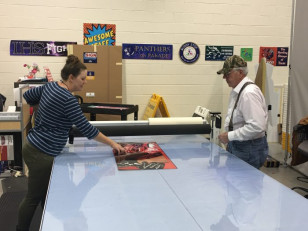 “That opened the door for thank-you cards, mailing envelopes — anything you want variable,” says Almand.

Finally, several years later, the in-plant added another RSA component to the mix: ReadyPrint. This prepress software lets the shop automate many of the preprint tasks, freeing up staff even further to handle the more complex tasks.

“That integrated directly with WebCRD and QDirect,” notes Almand. “It is a makeready tool that gave us the ability to make changes to jobs if needed, and because it’s all integrated, the changes happen in real time. We don’t have to go back and make adjustments, so it saves time. And because the changes are saved with the job ticket information, it’s all sent back to WebCRD.”

Broderick notes that at one point, the district was opening as many as four new campuses per year, and each time, the in-plant saw annual volumes increase by around 1.5 million impressions. Today, the Print, Mail and Sign Center supports 72 schools, comprising approximately 8,000 staff members and 63,000 students.

“In the past couple of years,” she says, “that [volume] steadied out, but it is starting to ramp up again.”

That growth is what drove the need for automation, and in the future, Broderick anticipates it will compel the need for more space as well, although she says the plan is to remain in the current 8,000-sq.-ft. facility for as long as possible.

Materials printed for the district’s 72 schools are sorted onto shelves where they are picked up by couriers for next-day delivery.

Today, Almand notes, the print shop is already running eight Xerox Nuvera 120s, five Xerox Nuvera 144s, one Xerox Versant 3100, and two Xerox Color 1000i digital color presses. He notes that where a job is routed depends first on whether it is color or black-and-white, and then size and volume, with the larger jobs going to the faster 144s.

“All this still is automatically flowed with WebCRD, which is shifting all the jobs to the appropriate queues,” he notes.

As much as 90% of the work the in-plant is producing today is still black-and-white, which is why the shop has invested in that side of the business. But Almand sees that starting to change as well.

“Our color volume is definitely increasing,” he notes. “As technology gets better and the color copies get cheaper, we expect a lot more volume to be transitioned to color as well. Personalized pieces have skyrocketed over the past few years and will probably continue to do so as well — people want something different each year, not the same holiday card, or the same type of personalized notepad. That stuff will always change, and as the district grows, we’ll be doing even more of that.”

Automation hasn’t only allowed Frisco ISD’s in-plant to more efficiently produce the same materials, however; it has also let the shop capture work that was previously outsourced. The personalized pieces are just one example, with Almand noting that before the transition, all of that type of work would have been contracted out to local print shops. Overall, the in-plant has started to bring many of those types of projects back in-house.

“We took on the graduation programs two years ago,” says Broderick, “and that was an outside project we were spending dollars on previously. We [also] brought parking permits in-house. We have saved a tremendous amount of money, and now any time we can bring projects back in-house that were outsourced, we try to do that.”

While Frisco ISD’s success with automation can easily be replicated by other in-plants, Almand cautions his peers not to be too hasty; the changes at Frisco ISD didn’t happen right away.

“We didn’t do it all in one night,” he stresses. “It happened over a few years; if you try to do it all at once you’re probably going to sink. You have to have a plan in place, and figure out what you want.”

Automation has allowed Frisco Independent School District’s in-plant to expand right alongside its thriving district, remaining a vibrant part of the organization as a whole, and even bringing new services and opportunities to the table — services that staff, teachers, and students might not have even realized were possible. With many in-plants struggling to stay relevant, this is a shining example of how one in-plant used automation technology to do exactly that.

“I see it growing year to year,” says Manager Sherri Broderick. “Since we started, it has increased 80%.”

To handle that expanding volume, the in-plant installed a second RSA WebCRD platform in May 2019 specifically for the sign side of the business.

“We have seen tremendous growth since that time,” Broderick continues. “People are seeing firsthand that we have catalogs set up so they can place their orders in templates, and they just upload files.”

Already, Broderick says, the in-plant has seen a dramatic decrease in the number of phone calls and emails about sign projects, which is helping streamline the operation and make it more efficient.