So when former director Jimmy Robinson spotted the Recognizer from Presentation Solutions, a tabletop printer for making plaques, trophies, and window decals, while attending the Southeastern University Printing and Digital Managers Conference last year, he saw many possibilities for the Livingston, Ala., university. The compact machine also prints and cuts parking tags, yard signs, bumper stickers, vanity magnets, and custom cutout shapes — items that were always difficult for customers to get.

“We are in a rural area,” notes Collins — about 60 miles southwest of Tuscaloosa. “So anything that we can offer here on campus, the community loves it.”

One of the first items the four-employee in-plant produced were award plaques for a university science symposium. 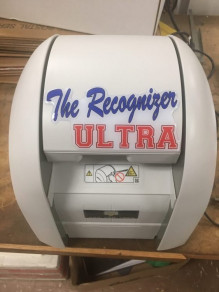 “In the past, they’ve just given them a generic plaque,” says Collins, who was recently promoted to interim director after Robinson’s retirement. This year, thanks to the in-plant’s new service offering, those plaques were a whole lot nicer. Once judging was completed in the morning, winners’ names were sent to the in-plant, which delivered the awards later that day.

“We were able to personalize the plaques,” Collins says. “For the award ceremony then, they actually had their name on it. That never happened before. So they were very appreciative of it.”

The Recognizer prints on an adhesive tape material, which is applied to the plaque. The starter kit that came with the printer included 40 plaques, Collins says. The software includes hundreds of templates for decals, bumper stickers, vanity tags, and more. And the machine can even diecut.

“Which is a game changer for us,” she declares.

So far the device, which cost less than $5,000, has brought the in-plant a lot of favorable attention from customers.

“They were very excited that we were able to turn something around so quickly, and then to be personalized too,” Collins says. “It definitely adds value to the plant.”

Duplo USA to Host Open House in Chicago Next Month