Back from the Brink — And Better for It

For in-plants, solid outcomes often require hard decisions about staffing, technology and services offered. This university print center made them — and prospered by sticking to them.

Four years ago, the Printing Services department at the University of Nebraska Medical Center (UNMC) in Omaha, Neb., was an in-plant in trouble.

Print volumes were down, staffing didn’t align with the decreased workload, and the shop was lumbered with what Lori Fuller, manager of Printing Services and Materials Management, describes as “a lot of equipment that was very old.” Sensing a money-losing operation and a takeover opportunity, the outsourcing vendors were closing in.

Today, the UNMC in-plant is lean, agile and digital, running in the black with new capabilities and a reinvigorated approach to carrying out its mission. It’s the result, Fuller says, of making and sticking to “some very hard decisions” that turned short-term pain into long-term gain for the in-plant and the university alike.

Threats of outsourcing and facilities management receded, according to Fuller, after UNMC reconsidered the value of the in-plant and decided to keep it. But this meant that “we had to take a look at our culture,” Fuller says, and commit to a turnaround plan aimed at trimming staff, cutting costs and delivering the kinds of products the in-plant’s customers expected.

Fortunately, with its student population of nearly 4,000 and its 5,200 employees, UNMC is an environment where “there still are a lot of people who print,” says Fuller, who surveyed the customer base to pinpoint its preferences. The in-plant also was recognized as a protector of the University of Nebraska’s brand identity, detailed in a style guide that specifies fonts, colors and other visual elements to be used by UNMC and the system’s other three campuses. 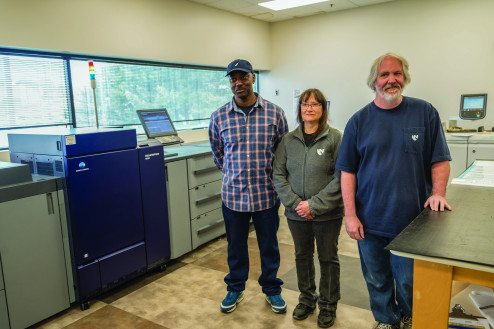 The UNMC in-plant’s Konica Minolta AccurioPress C6100 prints with better quality at a lower cost than the digital press it replaced. From left, Kevin Gamble, Sandy Goynes and Neal Smith.

“We police all of that for the university,” says Nikki Ball, customer service manager.

Clear from the outset was that the in-plant’s existing models of staffing and production were no longer working. Facing reality, Fuller addressed the head count by eliminating three full-time jobs and declining to fill a larger number of positions made vacant by retirement. The attrition took the roster from 20 employees to eight, all of whom are cross-trained — the proper complement of personnel, Fuller says, to handle all of the shop’s present needs.

Next came making the call about what to do with the in-plant’s offset presses and equally outdated bindery equipment. Average runs had dropped to below 2,000, and customers, according to Fuller, were saying things like, “I want 40 books today, and I may want 40 more later” — the kind of short-run demand offset isn’t good at fulfilling. This highlighted the fact that the two-week turnarounds of offset production were no longer feasible.

And so the offset presses and the old bindery machines were retired. The in-plant had a digital press, but its high service costs and click charges were not helping the shop meet a university-wide mandate to control expenses. Also in need of replacement, adds Fuller, was a home-grown ordering system unable to keep pace with the way customers wanted to buy their printing.

The in-plant added a Konica Minolta AccurioPress C6100 digital color press as its main production device, which delivers better print quality at a lower cost than the printer it replaced. Implementing Print Shop Pro in-plant management software from edu Business Solutions made it possible for the in-plant to receive 90% of its orders direct from customers online. These and other innovations, along with the positive effects of right-sizing, have made the in-plant profitable again, despite budget cuts it has had to carry out.

“All of those things contributed to money coming in,” says Fuller, noting that the shop is fully self-supporting through chargebacks. The lease cost of the AccurioPress C6100, for example, is smaller than the cost of the service contract for the old digital press, she says. The Konica Minolta device is, in fact, the only major piece of production equipment the shop leases: it now earns enough to have purchased and paid for everything else it operates.

The equipment is housed in a facility on campus that the in-plant shares with UNMC’s mailing and fulfillment departments. Situated on one floor — an advantage the shop didn’t have in the space it vacated three years ago — Fuller and her team work in surroundings that are both efficient for production and inviting to customers.

“We’ve gone ‘uptown’ on this one,” she observes. 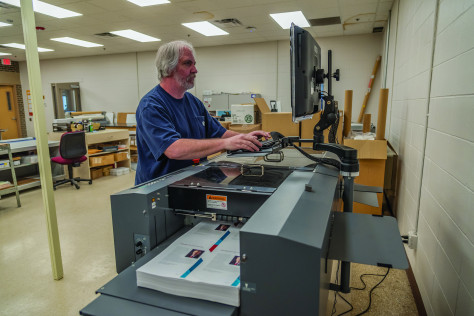 Neal Smith operates the Duplo DC-646 slitter/cutter/creaser/perforator, which has streamlined the finishing of personalized recruitment cards and other items.

The shop also serves customers at the nearby campus of the University of Nebraska at Omaha (UNO), which closed its own in-plant about five years ago. The UNMC in-plant prints postcards, letterhead and commencement material for UNO, although not officially as a sole supplier. The arrangement, says Fuller, “gave the campus the opportunity to go anywhere” to get its printing done. But in practice, she adds, the UNMC in-plant produces most of UNO’s jobs despite the fact that it doesn’t have right of first refusal on them (as it has for work originating on its home campus).

As if printing for two schools weren’t enough, the shop is also open to assignments from not-for-profit organizations. Now that the offset presses are gone, jobs that exceed the shop’s capacity are outsourced. These, says Ball, typically are one-time, 5,000-plus runs that the in-plant doesn’t inventory, “because space is like gold around here.”

Work handled internally benefits from being produced on up-to-date systems and equipment. With the AccurioPress C6100, Fuller says, “registration is always spot on,” and there are no concerns about variations in color. The device, managed by ReadyPrint workflow software from Rochester Software Associates, feeds stocks from six paper trays and can trim, score, fold, punch and coil bind in-line. With its variable-print capability, the press turns out personalized recruitment postcards in batches from a few dozen up to 7,000 pieces.

“What a game changer,” is how Fuller characterizes the shop’s Duplo DC-646 slitter/cutter/creaser/perforator. “In the words of my operator, ‘it’s like having another person.’”

She praises the integrated finishing solution for the way it “slits, cuts and stacks all in one shot,” speeding production of recruitment postcards and similar types of work. Comparable efficiencies have been gained from a Xanté Impressia digital envelope printer and a Neopost DS75i folder-inserter.

A trio of HP DesignJet wide-format printers in 42˝ and 60˝ widths are the platforms for one of the in-plant’s most in-demand specialties: research posters for student presentations. The shop produced nearly 10,500 of them last year, according to Ball, including some imaged on cloth for roll-up and easy transportation. The working space includes a kiosk with a computer where students can edit files and proof their posters in miniature before approving them for print.

As she reviews the transformation of the in-plant at the academic institution she has served for 29 years, Fuller sees a combination of inevitability and acceptance behind the changes. Things had come to a point, she says, where “all the big books and course packs we used to print” had been replaced electronically, idling the machines that once printed them. People who responded, “We always did it this way” no longer had their old routines to defend.

Fuller acknowledges that making the personnel adjustments wasn’t easy. “The people aspect of it was difficult,” she says. “When people left, it was sad to see them go.” But, there was no denying that the time had come to find a new way of doing things in keeping with the university’s general posture as a teaching and learning environment that continually embraces new technologies.

“If they are moving forward, and you are not, you can’t support the mission of the university,” she observes. “Feeling that you are staying right within the mission — that’s what matters.”

“We’re still here,” Fuller affirms, adding that other in-plants feeling a need to reinvent themselves shouldn’t shrink from the task. “Take the risk. Stay marketable. Promote your in-plant, and ask your customers what they want.”

Dates and Location for 10th Annual Inkjet Summit Are Announced

Three New Challenges of the New Normal
Reopening Of America: What Will This Look Like For Businesses Across The US
END_OF_DOCUMENT_TOKEN_TO_BE_REPLACED
Upcoming Webinars
Turn Data into Dollars