Bindery equipment often stands as an unsung hero in a print shop. Until something goes wrong, the binding contributions to a finished job tend to go relatively unnoticed by the end user.

Unfortunately for the staff at University of North Texas Printing and Distribution Solutions in Denton, Texas, the CP Bourg bookletmaker the in-plant was relying on was bringing more headaches than heroics. 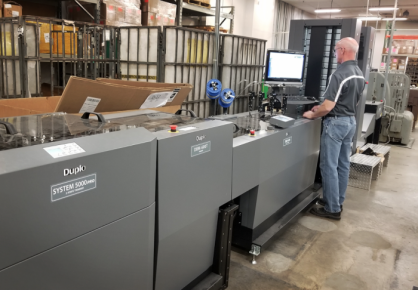 “That machine was only a few years old, but it was a problem from the minute it came in the door,” Director Lora Connaughton reports. “We spent more on service for it than we did for the machine.”

Finally, when one of the bookletmaker’s computer boards died and Connaughton learned that CP Bourg no longer manufactured the part, she knew it was time to make a move.

“We could not find a replacement [computer board],” Connaughton flatly states. “We decided that rather than trying to run one down — and I tried everywhere to find even a used part —  to go ahead and purchase a new machine.”

The in-plant kicked off 2018 by installing a new Duplo DBM-600 collator/bookletmaker. The new addition brought enhanced features to the shop that it did not have in the past, including three-knife trimming, which allows operators to trim to the bleeds.

“Previously, my bindery folks had to run the collated jobs through to stitch and then take them off to go to the cutter to trim it,” Connaughton explains. “So there was a lot of extra hand work.”

The addition of the trimming option has cut out about 20% of the production time for booklets, she notes.

The in-plant, which can trace its history on campus all the way back to 1925, is using the new Duplo to produce a range of promotional pieces and marketing booklets that the university mails out. The shop is home to 35 full-time employees and a crew of student workers, and produces about 85% of its jobs using digital equipment.

Connaughton points out that it was not difficult to justify to the university the addition of the Duplo, as a replacement bookletmaking machine was a necessity.

“And adding the additional options on it was not hard to justify either because it is saving us time,” she says. To justify the new device, “I sort of went with showing how much time this will save us along with [saving] money. Sometimes it is easier to add equipment than it is to add people.”

The shop’s employees have found the Duplo to be very easy to use, Connaughton notes. That’s good news for a busy in-plant which, along with the university’s Eagle Images Digital Print Center, produces more than 35,000 projects per year.

“Most of my bindery operators have many years of experience, and they found it to be very straightforward,” she adds. “Training was provided, and it was not a tough transition. Now we have had it about a year, and I think we had one thing serviced.”

'Ingrained in the Fabric' of the University