Canadian In-plants Meet in the Land of the Sasquatch

With between 3-5% of in-plants lost to outsourcing every year, it’s crucial that in-plants stay vigilant, respond to threats with accurate data on their prices and performance, and continually innovate and add value.

That was the strong message Consultant Howie Fenton passed along to in-plant managers during the recent College and University Print Management Association of Canada (CUPMAC) conference. Fenton gave three information-packed presentations at the 52nd annual CUPMAC conference, which took place in late June and drew more than 30 managers to Harrison Hot Springs, British Columbia, on the west coast of Canada.

Known as the Fraser Valley, this region has a strong connection with the Sasquatch, a sacred figure to the local Sts’alies indigenous people, who believe the “hairy man” is a spiritual being who watches over the land. Sts’alies drummers and dancers welcomed CUPMAC attendees on the first day of the event with traditional chants and dances, including the Sasquatch dance, which featured dancers dressed as the legendary creature.

CUPMAC gave Canadian in-plant managers from all over the country an opportunity to network and learn from educational speakers at this resort on the shores of Lake Harrison, a glacier-fed lake rimmed with tall mountains, some still snow-capped even at the beginning of summer. The conversations of managers revealed the same concerns U.S. manager have, including survival and expansion, particularly into wide-format printing. These topics and more were covered in detail during the three-day event. 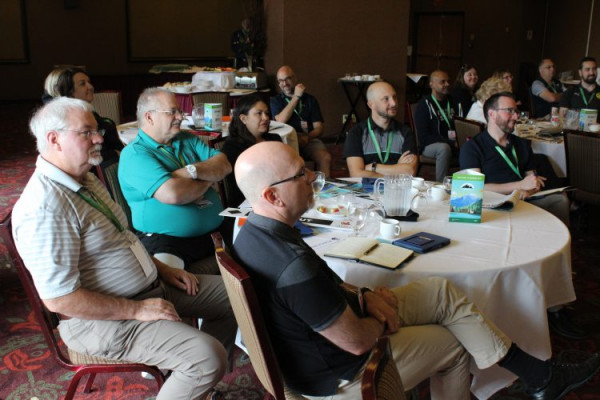 Managers travelled from all across Canada to attend the 52nd annual CUPMAC conference. 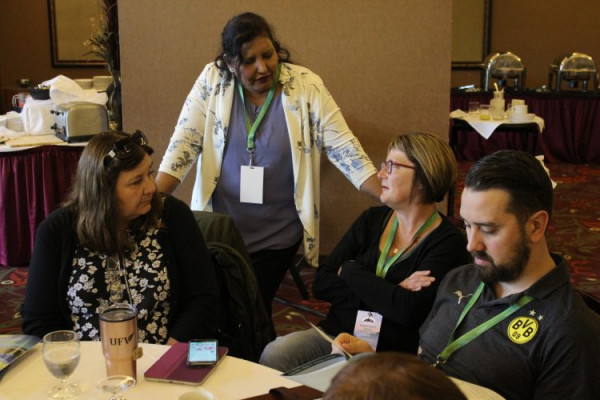 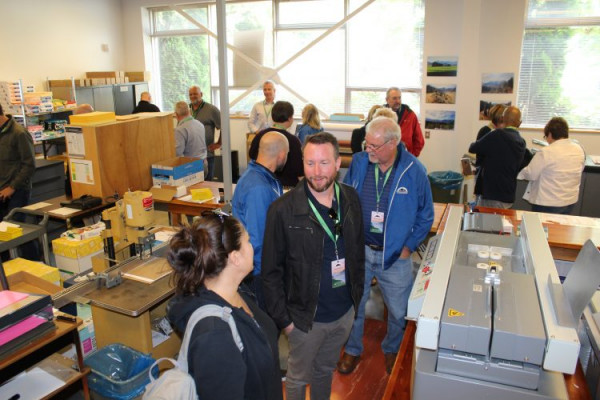 Attendees had a chance to tour University of the Fraser Valley Print Services in Chilliwack during the conference. 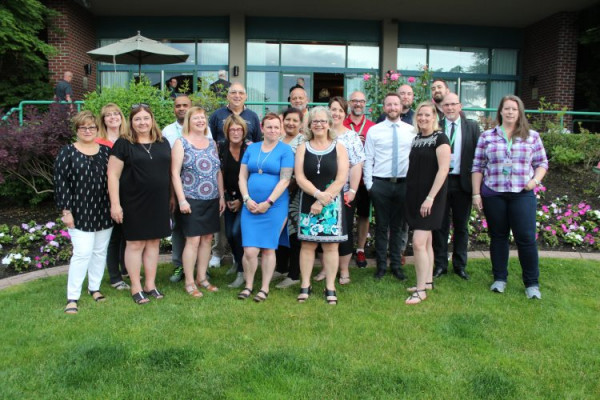 CUPMAC members pose for a group shot before the awards dinner on the final night of the conference. 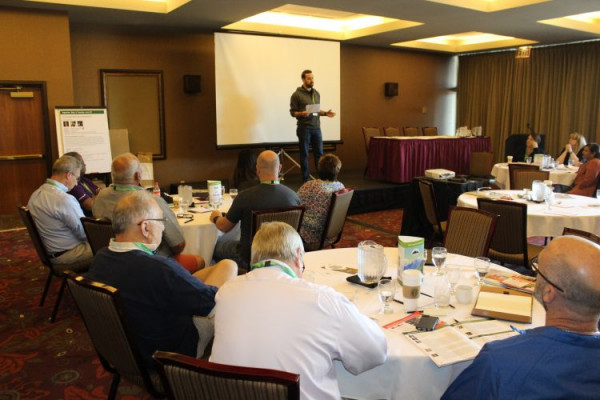 Sean Guldin, manager of Printing Services at the University of Victoria, tells attendees how he built up his in-plant’s wide-format capabilities over the past five years. 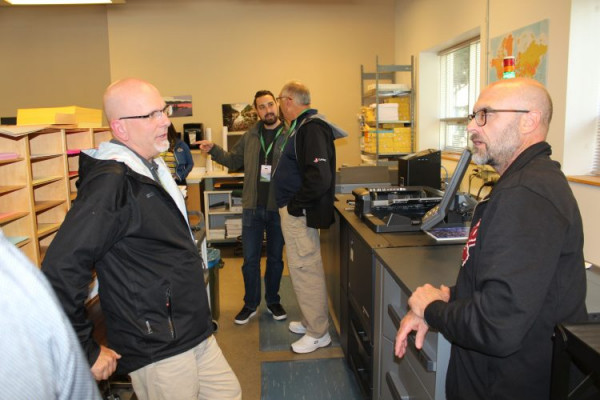 After a welcome from officials at the University of the Fraser Valley, which hosted this year’s conference, speakers from platinum sponsor Konica Minolta gave an overview of their company’s office products as well as cutting-edge technologies that will define the workplace of the future. Then Konica Minolta affiliate Think2Grow Marketing talked about the CUPMAC member campaign they led, which increased attendance nearly 60% this year. The campaign included postcards, emails, and social media components, along with a contest that awarded free registration to some members whose funding had been cut.

Then Fenton gave the first of three interactive presentations that had managers sitting up straight and taking notes. He listed a number of warning signs managers should pay attention to because they often prompt scrutiny and possibly outsourcing:

“Be prepared,” he cautioned. Facilities management companies are calling on in-plants’ senior management daily, often quoting old data to prove their supposed cost savings. In truth, those outsourcing companies only bid on the “lion’s share” of print work, not the exceptions, such as rush jobs. At one in-plant Fenton worked with, there were 279 of these exceptions in a year, which would have actually raised the parent organization’s print costs by $488,000 had the outsourcing firm done the printing.

This message rarely reaches the decision-makers though. He urged managers to calculate the value of these exceptions and have that number ready to report. This includes the value of same-day or overnight turnaround.

“Faster turnaround time can really help you defend the in-plant in a make-versus-buy analysis,” he said. Every time your staff bends over backward to get a rush job done on time, “that’s really part of your value,” he said, and you should promote it as such.

Fenton encouraged managers to benchmark and measure a variety of things, such as sales per employee, customer satisfaction, competitive pricing and on-time delivery. Keep this data handy to help justify the in-plant when outsourcing firms claim they can do it better. Since brand integrity is so important to universities, he suggested having staff track every time they catch a brand error and report it to the marketing department.

Fenton offered one session on pricing strategies, and suggested that managers charge more for higher-value items, such as wide-format, and then lower their charges for commodity items, to compete better with outside printers. Do a periodic pricing analysis and where you see a price gap, reduce your price, compensating by raising it for jobs with a greater perceived value.

To keep Canadian managers apprised of trends in the U.S. in-plant industry, IPI Editor Bob Neubauer gave a presentation using data from four different IPI research reports to show which services in-plants are moving into as they strive to add value. A segment of his talk focused on new wide-format and specialty applications being produced by in-plants.

The wide-format topic was covered in more detail by Sean Guldin, manager of Printing Services at the University of Victoria. He told attendees how he built up his in-plant’s wide-format capabilities over the past five years, from simple poster printing to more complex printing, laminating, mounting, and cutting.

Seeing the growing demand for wide-format on campus, he added a 64˝ printer, a plotter and a laminator — despite the fact that his shop had no room for this equipment. To accommodate it, he found space in the basement of the book store and began cranking out the work. After a year, the increased revenue convinced his director to add a full-time person to run the wide-format operation and find more space for the equipment. By the end of the second year, Guldin said, revenue had grown enough to add a second person to that operation. Within three years, wide-format accounted for a fifth of the in-plant’s revenue.

“It’s something that keeps growing,” he said. (Read the full story of the University of Victoria’s here.)

The lone U.S. in-plant manager at the conference, Donna Cooper Horbelt, representing the Association of College and University Printers (ACUP+), gave a presentation about her in-plant at the University of Texas Health Science Center at Houston (UTHealth). Horbelt, director of Auxiliary Enterprises, Printing and Media Services, noted that 20% of her in-plant’s jobs are printed on offset presses, and they make up 60% of its revenue. Her shop includes a secure document printing department, with restricted access. IT sends secure files at night, and after they are printed and delivered, the files are erased.

Horbelt strives to market her in-plant as much as possible. The shop has created a marketing piece that shows off its capabilities, its awards are displayed prominently in the shop, and even the boxes used to deliver finished jobs have messages on them to tell customers about the in-plant’s capabilities.

The CUPMAC 2019 Conference is in full swing. @HowieFenton is giving a keynote on strategies from leading in-plants. pic.twitter.com/bEG423qgZE

“We’re constantly trying to market ourselves,” she said.

At a roundtable discussion on the last day, CUPMAC members shared their experiences with Web-to-print software, with users discussing the benefits and quirks of their systems. Guldin noted that using Web-to-print helps keep the university’s brand strong by ensuring the proper logo is used. Horbelt suggested managers involve the IT department right from the start to avoid problems later. Others complained their systems were not user friendly or required too much manual interaction.

The group also traveled to the University of the Fraser Valley in Chilliwack to tour its Print Services operation, managed by Chris Joakim, who also organized the conference. The in-plant relies on two Konica Minolta digital color presses — an Accurio­Press C2070 and an AccurioPress 6120 — for the bulk of its work and handles wide-format printing with a 42˝ Canon imagePROGRAF 4000S wide-format printer and a new Royal Sovereign RSC-1402HW laminator.

The conference wrapped up with a trade show followed by an awards dinner where the CUPMAC Awards were presented.