Increased automation, high-speed production, and application versatility are the key drivers behind the development of the next generation series of imagePRESS digital presses that Canon USA showcased at PRINTING United Expo. In a media briefing held October 13, representatives from Canon USA’s Production Solutions Business introduced the new additions to the imagePRESS lineup and highlighted recent research in digital printing that supports the equipment’s market positioning.

Matt Poliniak, senior manager for Canon USA’s Production Solutions Business, provided an overview of the new digital presses, including the imagePRESS V1350, which he referred to as a “new high-end flagship digital press.” He explained that in the development of the V1350, Canon USA emphasized durability, reliability, and stability, and ensured that for all its specifications, it either matched or exceeded its predecessor, the imagePRESS C10010VP.

Poliniak explained that one of the key features of the imagePRESS V1350 is its Productivity Intelligence Mode, which allows users to efficiently produce a wide variety of applications, including mixed media jobs. In Productivity Intelligence Mode, the press assesses the first 50 sheets and can determine the complexity of the job. If it is a mixed media run, Poliniak explained that the press will slightly slow down its production speed, but then produce the job at a consistent speed, rather than having to stop and readjust.

The V1350 can print on a wide variety of substrates, including media up to 500 gsm, which Poliniak said allows users to move into light packaging and labels. Additionally, the press can run synthetic stocks and larger-sized envelopes. Another key feature is the press’s new fusing technology dubbed POD-SURF (Surface Rapid Fusing), which optimizes thermal efficiency and variable pressure, boosting efficiency and print quality.

The session also included overviews of the new imagePRESS V900 series, which includes the V900, V800, and V700 light production presses. Poliniak said that this series will replace the imagePRESS C910, C810, and C710. He added that the V900 series builds on the success of the C910 series and includes new key features including a reduced physical footprint. 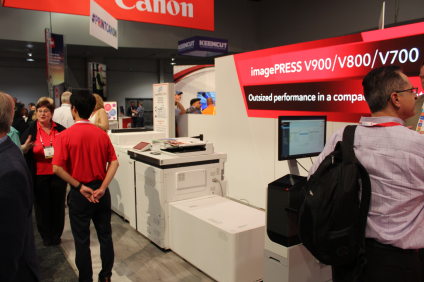 What Poliniak described as the most important addition to the V900 however, is the implementation of in-line spectrophotometers. With this now a standard feature, Poliniak said that color management processes such as calibration and profiling are automated and can be completed in a matter of minutes when using the PRISMAsync print server.

For those seeking a mid-production solution, Poliniak also highlighted the new imagePRESS V1000, which he said is off to a strong start and has completed field testing. 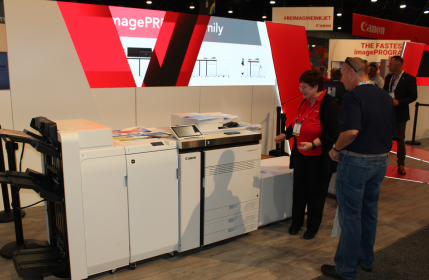 In support of this new lineup of digital presses and the theme of “Propelling your business forward in an everchanging competitive environment,” Bob Barbera, marketing director for Canon USA’s Production Solutions Business, highlighted key data points provided by NAPCO Research.

In addition to the increased share of overall production that digital printing has taken over from offset, Barbera emphasized print service providers’ automation efforts. Currently, he said about 20% of commercial printers state they are utilizing cloud-based workflows and that figure is expected to double. He also shared that 10% are utilizing the cloud for color management, and that figure is expected to increase to 30%. He added that color consistency emerged as a major objective for print providers, and the new features in the imagePRESS lineup will help deliver on this critical need.