Challenging Poverty With the Help of Inkjet

Compassion International fights childhood poverty with print. The religious organization that began in 1952 as a fund for Korean War orphans today assists more than 1.9 million children in 25 countries through a network of 7,000 local churches — with print in the form of personalized correspondence as the connective tissue that ties its charitable outreach together.

Compassion’s donors pledge to help children in need by sponsoring them with monthly contributions that last until the child reaches 18 to 22 years of age. Throughout that time, the child and his or her sponsor exchange letters, photos and other mementos through correspondence packets provided by Compassion, which considers the exchange vital to the child’s personal well-being and spiritual development.

In 2018, this epistolary traffic amounted to 5.63 million letters. The bulk of the exchange was facilitated by Compassion’s in-plant in Colorado Springs, Colo., which is responsible for printing, assembling and distributing the correspondence packets that underpin the sponsor-child relationships.

Until last year, the in-plant had been keeping ahead of the volume in a cut-sheet digital production workflow built around a pair of Xerox iGen5 150 presses supported by a Xerox Color 1000 and a Nuvera 157. That changed with the installation of a Xerox Rialto 900 MP continuous-feed inkjet printer – and the uptick in efficiency for the in-plant’s already high-output operation has been remarkable.

Print Operations Manager Gary Benson likes everything that the device brings to the in-plant, from its compact footprint to its 600x600-dpi duplex color output at speeds up to 210 fpm. What really impresses him, however, is the way the Rialto’s integrated finishing capabilities simplify and streamline production of the correspondence packets, which the shop now can process with fewer steps and in less time than was possible with the iGens.

The packets, Benson explains, combine the letter written by the child with a piece of personalized stationery that the sponsor can use to write back. The stationery also gives the supporter the option of sending a financial gift to the child on a detachable coupon. The original letters from the children used to come directly to Compassion, which forwarded them to the sponsors. The originals are now scanned at the organization’s field offices and sent to the in-plant in digital form.

“We get the file of the letter, so the packet will include the stationery and then whatever number of pages the child wrote,” he says. “Our average is around two, three letters per batch. We have some that go as high as 10, but that’s pretty rare, where the child would draw lots of pictures.”

Merging prints of the scanned files with the return stationery was the bottleneck. “Prior to the Rialto, that was all a sheetfed operation on our iGens,” Benson says. “We would buy pre-perfed paper for the stationery, we’d buy blank paper for the letters, we’d run them three-up on the iGen and then have to cut those sheets, and then collate those on the inserter into an envelope.”

By virtue of its inline finishing assets, the continuous-feed Rialto can accomplish most of these tasks in the same pass as the printing. “We run 9˝ wide webs, and there’s a slitter that trims to the A4 width and a sheeter that trims to the A4 length,” Benson explains. “We cut about three-fourths of an inch off the side of the web, and then we sheet it to A4 length.”

Perhaps the greatest gain in efficiency comes from the Rialto’s integrated dynamic perforating unit, which Benson calls the deciding factor in the in-plant’s decision to acquire the press.

With the help of the perfing unit, he says, “we’ll run blank roll stock into the printer and dynamically drive the perf with a small 2D bar code that our Neopost inserters will read. It drives the inserter to say, ‘here’s the start of the set, here’s the end, now accumulate this group and send them to the folder.’”

In this way, Benson continues, “we’ve bypassed our cutting operation entirely. We don’t perf the letter until we come out with a collated set that we take directly to the inserter.” The result is runs of sets that are fully pre-collated on the printer with the stationery perforated for the coupon and, typically, one to three pages of letters from the child.

It all adds up to the kind of fast-paced, uninterrupted, time- and cost-saving production that every in-plant wants from its digital operations. The Rialto’s rated speed, according to Benson, is 9,000 A4 impressions per hour (iph); he usually plans on running at about 70% of that, for a yield of 6,000 iph. Printing at that clip, with its inline paper processing and collating, the inkjet press embodies everything that makes high-speed inkjet attractive for high-volume production.

“We probably had a 15% to 18% reduction in labor and time to go from file receipt to loading on the inserter,” Benson says. “We print faster, and we take out the finishing aspect, so it’s edging at 20%, high teens, low twenties, in terms of labor savings.”

The savings occur upstream of the press as well. Gone, for example, is the task of paginating for three-up printing that production on the iGens required. “It simplifies file prep significantly, just outputting a single PDF per set,” Benson notes. “Before, we were running into a separate Impostrip step to do the imposition. That’s all no longer needed. So, we’re streamlining the steps all the way along.” 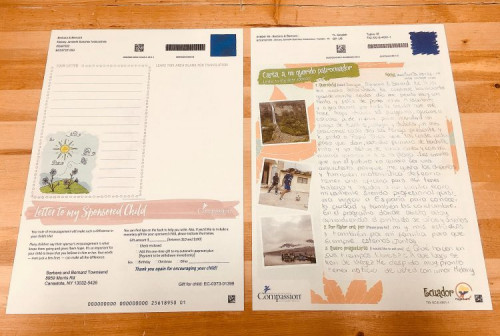 Compassion International links its donors to the children they sponsor through correspondence packets containing letters the children have written (right) and a piece of return stationery (left) with a tear-off coupon for additional gifts. Thanks to dynamic perforating and inline cutting, trimming, collating and stacking on the in-plant’s Xerox Rialto 900 MP inkjet press, the finished sets can go straight to the inserters for mailing.

The Compassion in-plant installed the Rialto last August and put it into live production in the first week of September. Benson says he expects to achieve ROI by the end of this year, two years into the machine’s five-year lease. He points out that while a lower cost per impression versus toner was a strong selling point for the Rialto, it wasn’t the sole consideration.

The in-plant didn’t invest in inkjet just for the sake of having inkjet, Benson emphasizes. “It was really an issue of when Xerox came out with the Rialto, the very compact footprint, and in particular, the dynamic perf. The combination of those two things, along with the fact that we really were interested in looking at that lower cost per impression with inkjet compared to toner. Those three factors were really the big items.”

“We knew it wasn’t justified strictly on a cost basis,” he adds. “It was more labor savings and workflow.” Another nice dividend is saving an estimated $50,000 annually on the paper for the correspondence packets, which represent the largest-volume component of the in-plant’s workload.

The Rialto currently is producing about 25% of the in-plant’s total yearly volume of 15 million impressions. Its duties won’t end there, however.

“The plan is to migrate more work to the Rialto,” Benson says. “We have a Xerox Nuvera 157 that we use to print shells. We expect to migrate most, if not all of that shell work over to the Rialto, to get away from buying shells and just image the whole thing on blank paper.”

Migrating the correspondence packets from the iGens to the Rialto has opened up capacity on the cut-sheet devices that the in-plant intends to put to good use.

“We typically run a lot of 80-lb. cover on the iGens,” Benson says. “We still run the full 14x 26˝ sheet material on [them]. It’s just given us more flexibility on those two machines that we didn’t have before.”

The Rialto, meanwhile, has made itself comfortably at home within the in-plant’s 15,000-sq.-ft. production area, where competitive models with twice its dimensions would have had a hard time finding a berth.

“We didn’t have the room [for that equipment] unless we would have done serious modification to our facility,” Benson says. “The footprint of the Rialto fit right into the room we have humidified. It’s very compact.”

It’s also highly reliable. “For the most part, I’d say we’re tracking fairly close to the planned 70% of machine uptime,” Benson declares. He gives comparably high marks to the look of the printed product coming off the inkjet press.

“We didn’t give up anything in terms of quality from toner to inkjet. Years back, you could spot the sub-par quality of an inkjet print a mile away. That’s no longer the case. I didn’t feel that we had to compromise at all.”

Given everything the Rialto had to recommend it, the in-plant didn’t face a hard sell in convincing the parent organization to approve its adoption. “We worked extensively on the CBA (cost-benefit analysis) for this, and we had a good case going in,” Benson says. “We worked closely with Xerox to develop the CBA, along with our finance group, so that when we went to our executive leadership, it went through fairly smoothly.”

Since then, the Rialto has proven to be the right tool for advancing the in-plant’s special mission. “We are a Christian ministry, and one of our core functions is releasing children from poverty in Jesus’s name,” Benson explains. “A big part of what we do to that end is to link a sponsor to a child in a one-to-one relationship.

“All of our communication is one-to-one to the recipient, so [apart from] the one or two percent where we print a static image, almost everything else is very personalized for the recipient.” The correspondence packets accomplish this by addressing sponsor and sponsored child by name, referencing the place where the child lives and sharing similar details.

The Rialto shines at the task, and Benson says he expects it to handle other applications equally well. “Our strategy going in was, and still is, that we wanted to have a very stable production model for the child letters, and then we’ll expand into other types of components.”

His advice to other in-plants contemplating a transition to inkjet is succinct. “If you’re looking solely to reduce impression costs, you’re missing the point,” he counsels. The true justification lies in combining processes for overall cost savings as the Rialto 900 MP has enabled Compassion’s in-plant to do. That should be what ultimately drives the investment decision, Benson believes.