Choosing the Right Web-to-Print System for Your In-plant 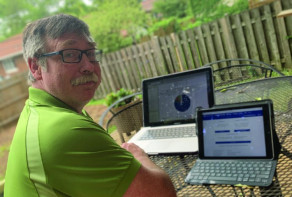 Though no single workflow solution is right for every in-plant, the workflow that modern in-plants find most useful is Web-to-print (W2P). It can turn an in-plant that relies on paper forms and manual tracking into one where much of the work is automated, freeing up limited staff time for other tasks.

“Web-to-print software was one of the things we looked for when I took over the department,” he says.

Nelson had inherited a system no one knew how to use — so they didn’t. Customers stuck with trusty five-part carbonless forms.

“Everything was manual forms,” he laments. It was cumbersome. He wanted to automate processes such as ordering, job ticketing, and billing.

Simply installing a W2P system isn’t enough, though. You have to find the right system for your in-plant. This is something Barbara Hannah experienced firsthand.

Hannah is director of Print Solutions for Region 4 Education Service Center in Houston, Texas, which assists school districts and charter schools with improving efficiencies and student performance. In Feb. 2019 her in-plant replaced an older W2P system with a new one, and she says the shop is already seeing a difference.

“Prior to this, about 60% of our jobs came in via the previous Web-to-print system,” she reports. “Now about 95% come that way. It’s awesome.”

How can an in-plant manager tell the difference between a W2P system that will revolutionize productivity and one that will sit idle while staff and customers continue to do it the old way?

Terry Oliver, manager of OhioHealth Print and Design Services in Columbus, notes that first and foremost, looking for the right features is a critical element. She uses the EFI MarketDirect Storefront 11, installed in 2003, and lists some of the features that stand out:

“VDP personalization for images and text, which will support any application, reporting capabilities, and an easy-to-use platform. We are a health care system, so the majority of my customers know nothing about print, so it was very easy to customize and tailor [for] ease of use.”

Here are some of the key questions to ask when assessing W2P systems.

Like Oliver, Hannah notes that for her seven-employee operation, user friendliness was one of the key features she looked for when the time came to replace her system. She ultimately went with WebCRD from Rochester Software Associates, in part because it is “very easy to use. The customer can get pricing immediately; they don’t have to submit estimates and wait, or go back and forth. It is easy for them to set the job up themselves.”

Nelson had the same issue with a previous system, before installing EDU Systems’ PrintShop Pro product 10 years ago.

“I had inherited a much bigger system, which didn’t work,” he notes. “No one understood it, and it was hard to implement. I think one of the biggest things to consider is the entire staff; get them involved and on board so they understand what it is.”

2. How Customizable Is It?

In the world of W2P software, there are two main camps: off-the-shelf solutions that are installed as-is and customizable solutions that can be adjusted to fit specific needs. While some in-plants will embrace the ability to fully customize to get the exact functionality they need, for others, the modularity and the need to add pieces and parts to get new abilities will be more frustrating than liberating. This is where knowing up front what the in-plant truly needs is critical.

“The system we were using previously needed a lot of customization, and still never really met our specific needs,” notes Hannah. “So I was going to have to keep throwing money at it to get where I wanted to go, and it still wouldn’t fit quite right.” RSA’s solution is sold modularly, allowing her to only invest in what she needs, but each piece fits her environment exactly, rather than taking something that mostly works, and then needing to make changes.

For Nelson, the ability to customize EDU’s solution was one of the things that drew him to it.

“Sometimes, depending on the system, you just use one aspect such as uploading artwork, etc., while others want a complete inventory and process management solution.” The ability to pick and choose which pieces will work best for him, and the ability to add new functions as needed, is what makes it perfect for his organization.

For any in-plant considering adding — or upgrading — a W2P solution, make sure to evaluate this aspect of the solution up front. Ask for references of other users, and even more specifically ask for references from in-plants similar to your own. This will give a good idea of how well the out-of-the-box solution or modules will work, and how much flexibility there is to customize.

Having a software solution hosted internally and managed by the IT staff might seem like a good way to go — after all, it means everything is completely within the operation’s control, rather than relying on the SaaS model. But there are drawbacks as well, as both Hannah and Nelson found.

“When we first started, we had it hosted on campus,” says Nelson. “We bought the software, and there was an annual minimum software maintenance agreement. But just this year, we migrated to SaaS, so now EDU is hosting it, and it ties into our database. Our IT team wanted that to happen — they have all these systems, and wanted to pare down the number of them that they had to maintain, update, etc., and just focus on their own critical systems such as class delivery and registration.”

He notes that the switch has had a number of benefits, including much faster response when something goes wrong; instead of needing to get on a three-way conference call with EDU, the IT team, and his own staff, he can just call one person and resolve the issue. Updates are also immediate, instead of always being a version or two behind until the on-campus IT staff could get to upgrades.

Hannah offers the same observation, saying that her IT team “doesn’t’ have anything to do with the system now except they are aware of it. They were very on board with having it hosted by RSA; it took a load off them.” This way the IT staff doesn’t have to have someone trained specifically on how to maintain and operate just that one system. So it “worked out to be the best of both worlds” having RSA host it, allowing the in-plant to have access to immediate support and upgrades, while the IT team was freed up to work on other systems.

Oliver notes that her system was hosted by EFI from the beginning. “We basically only got permission to white list it, so no firewalls would prevent our jobs from processing.” She does bring up one point to keep in mind when hosting off-site, rather than internally: “We still have issues every now and then, when they decide to make changes in our network.”

4. How Much Training Is Offered?

W2P systems can quickly get very complicated. That is compounded if the provider is constantly adding upgrades or new functionality. While it is always great to have a responsive company doing its best to meet the needs of the entire client base, it can mean frustration for the in-plant if things change without warning, or new features aren’t properly explained.

“EDU is very attentive to its user base and will make enhancements continually,” says Nelson. “The downside, however, is that we don’t necessarily understand how to use the enhancements, so it takes some going back and doing retraining. If enough people had a need, they will modify the program to address it for the majority.”

“We customized many training guides and also assisted with online learning classes before we launched it,” says Oliver. For her, part of the appeal was that her in-plant was already using the EFI Fiery front end, so her staff was familiar with the way it worked, and knew it would integrate well with what was already in place, which is something to keep in mind.

“The thing that was most important to me was support,” says Hannah. “If we have an issue, there will be someone to answer questions right away. RSA also had training scheduled for every module; you just sign up [for] an online session, and they record it so you can download the link and watch it as many times as you want. Or do another live session if there are still questions you feel you need answered.”

5. How Hard Is It to Implement?

This is another area where asking for references is a great idea. Talk to other in-plants not just to get a feel for how the system works in their daily operations, and what they like or don’t like about the system, but also ask how difficult it was to switch.

“Find out how they really work, and really get under the hood to see what it took to implement the system. That is the most time-consuming and tedious part,” says Hannah. “I know from implementing two other previous systems, it can really suck the wind out of your sails and slow you down.”

Implementation is also about asking how hard it will be to convert the user base, not just the internal systems, to a new way of ordering and managing print. Nelson notes that when his operation made the switch, there were still a large number of people who “took our carbonless form, and made photocopies, and sent in the work that way. We stopped sending the forms, but there was a rogue element who still had them, who would print them out and send us their hard copies instead of doing it online.”

His response was not to yell at them or refuse to accept the work, but to be accessible and relevant, handling their jobs while trying to steer them toward the easier direction. That patience paid off, and he reports that today the amount of work that still comes in via hard copy is very minimal. At the same time, billing went from taking three days to just one each month, and while quick copy work has declined, he says, the amount of marketing materials, booklets, and color work has all gone up.

“It’s not just the online system,” he says, “but that’s a big part of it. It makes the departments seem more professional and makes them more confident in what they’re doing.”

Oliver also stresses that in-plant managers should ask about the “system requirements that are necessary … to make it a smooth transition.” She notes that features to specifically ask about include job ticketing with a barcode system for tracking purposes, as that can help ease the internal transition as well.

Web-to-print software can help make an in-plant operation more efficient, more responsive to the organization’s needs, and even more cost efficient. But it can also be a source of frustration, lost time, and lost money if the wrong solution is chosen, or the right solution is implemented without the right people understanding how to use it.

The key is to ask questions up front, ask for references, and know exactly what is included — and how it will work for you — before making the choice.