As church membership expands, the need for printed material at the Church of Scientology International is soaring. To meet the demand, the church’s in-plant has added a production inkjet press.

The staff at the massive Church of Scientology International Dissemination and Distribution Center in Commerce, Calif., was facing a capacity crunch. As the church and its membership continues to expand, so do its mailing lists and printing responsibilities.

The in-plant’s staff of 50 previously relied on a Goss web press, a Heidelberg sheetfed press and an HP Indigo 7200 digital press to churn out a variety of magazines, publications and informational materials for the church. But in November, in response to demand, the shop boosted productivity by adding a new Fujifilm J Press 540W high-speed production inkjet web press to the mix.

“One of the biggest areas of growth has been on the magazine side,” Project Manager Owen Varrall reveals. “We have been running a paper wrap to go with the magazine mailing. That was going to the digital press, and we were maxing it out.”

Varrall notes that, on an average week, the shop’s digital press was at 82 percent capacity.

“We really reviewed what we were doing and did a ton of homework, including reviewing about 10 different inkjet machines,” Varrall explains. “What we are aiming to do is to be able to continue to expand the magazines and paper wraps. That was the primary point of the purchase.” 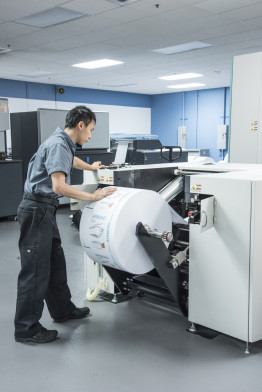 The main justifications for adding the Fujifilm inkjet press were the relatively low upfront cost, reasonable operation costs and the fast 416-feet-per-minute production speed. The new machine also needed to fit in an existing climate-controlled digital printing room. Of all the machines the shop reviewed, the J Press 540W had the smallest footprint — just 9x22´.

“It was taking up to 16 days to produce on the digital press,” Varrall recalls, noting that now they can run the same job on the inkjet press in just six days — and at half the cost.

“It’s the cost of clicks with the Indigo versus just the cost of the ink for the Fuji,” Varrall says.

Varrall has been impressed with the 600x600-dpi quality of the work coming off the inkjet press. The shop formerly ran its magazine work on the Indigo press as two-colors. It is now being produced as a four-color job on the Fujifilm inkjet press.

“We are extremely color managed internally,” Varrall notes. “So we were convinced we would be able to color manage and have all of our presses match each other. And we found that we could.” 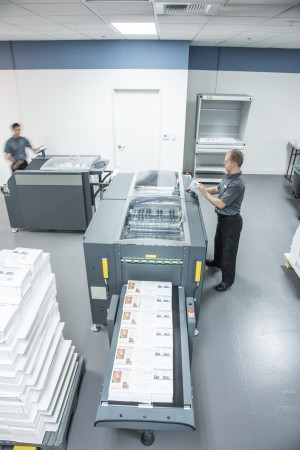 Varrall points out that the shop has received positive feedback from the internal art department staff and designers regarding the quality of work coming off the new press.

“It even prints the highlights quite well,” he adds.

Adding the new inkjet press has opened up capacity on the Indigo digital press.

“We are also seeing a huge surge in sheetfed work,” Varrall says. “Now some work can move from the Heidelberg press to the digital presses.” This includes some 9 million inserts for the church magazine each month.

“Fuji has commented that we have used the press more than anyone they have ever seen,” Varrall exclaims, revealing that the shop has printed 2.7 million meters of materials on the J Press 540W since December.

The one snag in the process of running the new press came while trying to determine what type of paper to run through the machine.

“In the beginning, let’s just say we didn’t know what we were doing with regard to printing papers,” Varrall says with a laugh. “We worked with our paper vendor [Veritiv] who was very helpful. We printed on at least 10 different stocks, including our house stock, which is a [Georgia Pacific] Spectrum 60-lb. offset paper.”

The shop’s staff was not happy with the initial results. Colors were not vibrant, and black ink appeared gray. Then Varrall started running inkjet-treated papers.

Varrall found that Mitsubishi inkjet paper was the best of six different inkjet papers tested at the in-plant. And the shop has now negotiated a lower cost for inkjet-treated stock.

Varrall is happy with the purchase of the Fujifilm J Press 540W, noting that training was simple and the press operators haven’t had any problems adjusting to running an inkjet press. He expects to see a return on the church’s investment in about two years.

“The machine is very well built,” he concludes. “We haven’t seen any mechanical press problems since we started.”