Wide-format printing isn’t new at the University of Alabama’s Printing Services operation. In fact, notes Manager Nicholas Payne, it has been one of the key services offered by the 40-employee in-plant for the past 10 years.

Despite being an offset printing powerhouse, with four- and five-color sheetfed presses in its 30,000-sq.-ft. facility, the Tuscaloosa-based operation has also developed a proficiency for wide-format printing, producing everything from campus street signs, to parking signs, to banners, and even wall wraps. Anything that campus customers might need, notes Payne, the in-plant can provide.

“The demand pushed the need,” he says. “Turnaround time was a part of that. If a customer orders today, we can turn it around today or tomorrow, where outsourcing takes weeks.”

That ability to deliver finished projects even on tight deadlines has proven to be a winning strategy. The original Roland XC540 purchased a decade ago is still in use, and today handles applications such as stickers and decals. It has been joined by a diverse range of technologies added to meet specific application needs. Those include: 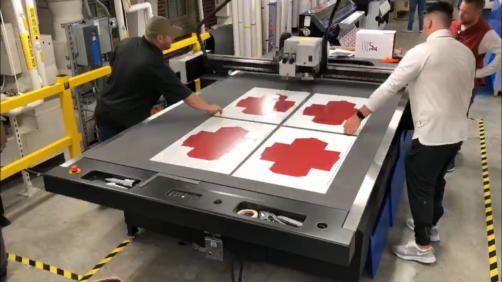 In addition, the in-plant has a range of supplementary equipment to help it deliver finished products of all types. The Esko Kongsberg X24 contour cutter is being used for milling acrylic sneeze barriers, cutting large-run Coroplast sign orders, milling metal signs, and precision cutting, for example. The shop also has two Epilog laser engravers and one rotary engraver, as well as two Epson sublimation printers, a 44˝ HP thermal inkjet printer, and even a Ricoh direct-to-garment printer. The end result is the ability to say “yes” to anything that might come through the door, no matter how large, unusual, or detailed it might be.

Other than the original Roland, most of that equipment, says Payne, was purchased in the last five years.

“It was 100% based on need,” he says. “Everything we bought was when I had a need to justify the purchase. That’s the route we took.” 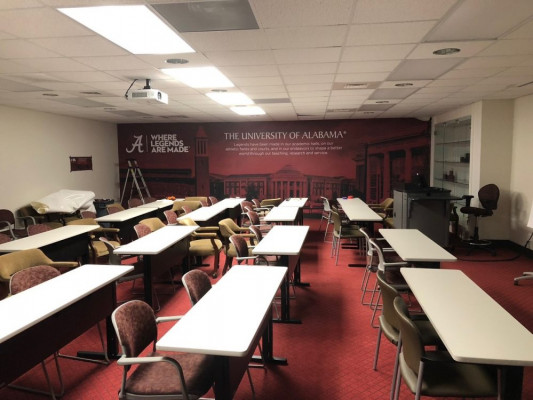 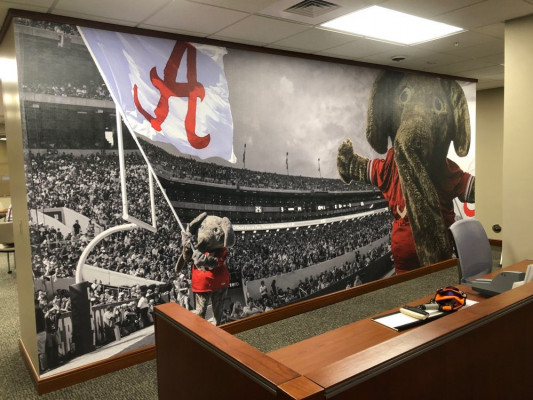 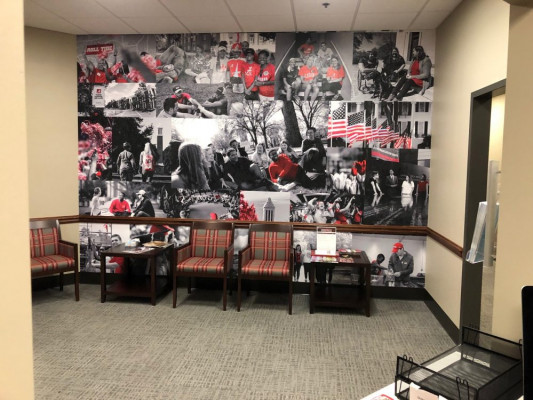 He does concede that the in-plant is lucky to have the space, noting that he believes Printing Services’ 30,000-sq.-ft. facility (with six loading docks) is one of the largest in-plant operations in the country in square footage.

“I have a huge shop,” Payne laughs. “So, plenty of room — although I’m quickly running out,” he adds, especially with the addition of the flatbed printers and cutting systems.

Five years ago, Printing Services added a five-color, 36˝ Ryobi 925 UV LED offset press, which has made a big difference in the quality of the recruitment materials, athletic media guides for the Crimson Tide’s teams, alumni literature, magazines and other materials the in-plant prints. The shop also runs a four-color, 26˝ Sakurai 466SIP convertible perfector. With $3,676,000 in annual revenue, Printing Services is overseen by Director Wayne Mehberg.

Part of the reason for the in-plant’s wide-format diversification is that customer demand is constantly evolving. When COVID-19 created a need for new types of work, Printing Services was able to step up and get these projects done because it already had the right equipment in place.

“The past year we haven’t done as many wall wraps or large displays,” says Payne. “It’s been more social distancing stickers and floor graphics.”

The contour cutter was added in July, he says, because of those changing demands.

“We had a need to produce the acrylic and plexi shields for the stadium and classrooms, and after adding the numbers, it made sense to just buy the machine,” he says. “To this day, we’ve done 1,400-1,500 sneeze guards across campus. Without this machine, we couldn’t have opened back up.”

After COVID recedes, he has another use in mind for the new equipment.

“We used to order aluminum signs. Now we’re producing those in-house,” he reports. “We’re ordering the stock and cutting to spec now.” Even pieces such as dimensional lettering will now be done by his shop because it has a full complement of technologies to meet every possible need.

Beyond the unique pieces being produced for a post-COVID era, University Printing Services is responsible for a range of interesting applications all around campus.

For example, he notes, his shop produces all of the big wall wraps for buildings, and does quite a bit of work for the museum as well as for the Crimson Tide athletics program.

“Basically, anything anyone calls and orders, we figure out a way to produce it,” Payne says. “We do also take some outside work, but we don’t actively pursue that.”

Beyond printing, Payne’s shop also handles all the installation of the work it produces, such as wall, window and floor graphics. His staff has also wrapped a few box trucks, and even golf carts that are used on campus. He does charge for installation services, but notes that it is already built into the price when he quotes a job that requires it, so it’s not something he needs to negotiate separately.  As to why the shop handles installation in-house, Payne notes that it means he can make sure every job ends up looking exactly the way it is supposed to.

“I know it’s been installed how I want it to look,” he explains. “I know how the design is supposed to look, and if there’s an issue, I can take the necessary steps to correct it.”

One installation project he’s especially proud of was done for the museum.

“We did a whole hall on the bottom floor, wrapping both sides. It was a pretty impressive piece,” he says.  For that job, the biggest challenge, Payne notes, was the time involved. He had two installers handling the job for a week. Since they were also part of the production staff, he had to juggle schedules to get everything else done.

In-plants that don’t offer wide-format printing are missing out, Payne concludes. It has allowed his in-plant to bring more work in-house and control quality and turnaround times. And being able to produce such a variety of wide-format applications for the University of Alabama has endeared the in-plant to its customers.

“The whole university community stands behind us and really backs us,” he says.