DI Press Is a ‘Neat Little Package’ for DCMO BOCES

Press operators at the Delaware-Chenango-Madison-Otsego Board of Cooperative Educational Services (DCMO BOCES) Print Shop in Norwich, N.Y., rejoiced when their refurbished four-color Presstek 34DI digital offset press was delivered last July. No longer would they have to run four-color work on two-color presses. Putting each sheet through the press twice was a tedious job that not only frustrated the 12-person team but also negatively affected turnaround times. 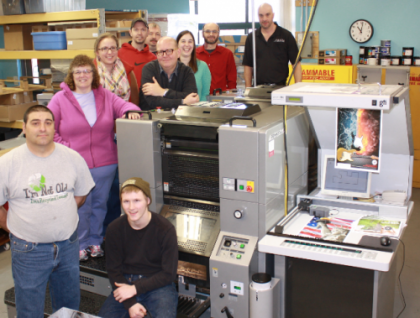 Supervisor Frank Oliver (second from right) and his team at the DCMO BOCES Print Shop show off their new Presstek 34DI press.

“We had some customers who knew we weren’t going to make their deadline, and they went somewhere else,” he reveals. “We don’t like to see that happen.”

The 34DI was installed through Presstek’s Certified Pre-Owned Press Program and has made the DCMO BOCES team very happy.

“For us and our budget, it was great move,” explains Oliver. With annual sales of $1.6 million, the shop basically starts over at zero every year.

“We don’t carry any money over,” he says. So a refurbished press made sense. Although high-end digital printers like the Xerox iGen or the Kodak NexPress produce quality work, the cost of those machines was out of the ballpark for DCMO BOCES.

“I knew that Presstek ensures the equipment is functioning well before it shows up on our floor,” he continues. The manufacturer put in new rollers, replaced sheet separators, reset all cylinders and preformed a litany of tests before delivering the press. The one-year warranty put management at ease, as well.

Oliver raves about the press’s automation. “It images the plates right on the press, so you don’t necessarily need a platemaker,” he says, although the shop still has one for its other presses.

“It has a computer that tells you if the ink is too low or if it’s got too much on the paper,” he adds, noting that ink levels can be adjusted with the click of a button. And, he says, the press knows when you’re cleaning it up, and it does so more efficiently with less chemistry and hazardous waste than a manual press.

In addition, the footprint is much smaller, so the 34DI fits easily into the in-plant’s 3,000-square-foot space. 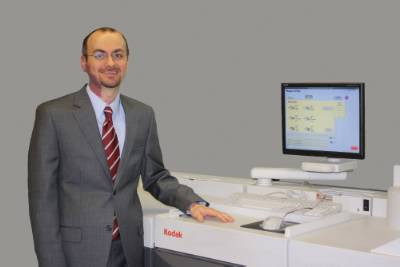 “Trying to cram a 30-foot four-color press in here just wouldn’t have happened in our current state,” observes Oliver. “Basically, it’s a neat little package. And it is saving my press operators from going crazy.”

DCMO BOCES is just one of 37 BOCES in New York that provide shared educational programs and services to school districts — anything from classes to management to printing. Because it is governed by municipal law, the DCMO BOCES Print Shop can run jobs for any New York state school district, although it officially oversees 16. It can also perform work for towns, villages and cities.

“We have a good niche here,” Oliver relays. “Being a cooperative, the school districts pay into this service, and we’re able to provide equipment that they wouldn’t otherwise be able to afford on their own.”

Items used by students, such as tests and report cards, are generally printed on the shop’s black-and-white copiers; or for two-color jobs, a smaller A.B. Dick 9985 offset press is used.

When the in-plant started to see more demand for full-color work, like newsletters, postcards and calendars, Oliver knew it was time to up the ante.

“Especially for long runs,” he explains, “the cost of color clicks coming off a color copier can’t compete with the cost per impression coming off the DI press. Even if the click rate is 3 to 4 cents per copy, it still doesn’t compare when your run length is anywhere from 12,000-17,000.”

Attendees will leave this webinar with an actionable list of ways to expand their company’s focus on innovation and inclusion.

Attendees will leave this webinar with an actionable list of ways to expand their company’s focus on innovation and inclusion.