In-plants in the central U.S. got a winter shock this week when conditions normally suited to their Minnesota cousins slammed into southern states like Texas and Oklahoma. Austin got 7” of snow, an unimaginable amount for a southern city that normally enjoys February temperatures in the upper 60s. Yesterday morning’s temperatures plunged into the single digits.

Unaccustomed to northern winters, Texas and Oklahoma residents used garden shovels to clear snow from their driveways and chipped away at icy windshields with spatulas and keys, dressed in as many light jackets as they could find against the arctic temperatures. The bigger problems, though, were the power outages, which went on for significant amounts of time. Some employees of University of Texas at Austin Document Solutions had no power or heat for more than 24 hours, dropping the temperature inside of their homes into the 40s. The in-plant and the university have been closed all week due to the conditions. 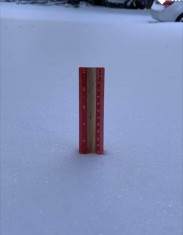 A measuring stick in the Austin, Texas, yard of Richard Beto, director of UT Austin Document Solutions, shows 7” of snow.

The University of Oklahoma is also closed, with rolling blackouts affecting nearly everyone in the Oklahoma City area.

“Right now, it’s sub-zero,” emailed Director John Sarantakos on Tuesday. “Yesterday, the high was 2 degrees. Heavy snow for us — probably 8˝. Looking at an additional 4-6˝ beginning later today.” (Fortunately, he packed his snow shovel when he moved south from Indiana years ago.)

In Houston, Metropolitan Transit Authority’s in-plant is closed, and Printing Services Manager Louis Ferrel reported that all staff were without power and water.

“Sleet, snow, rain and frozen roads with 14 degrees at night, high of 25 during the day,” described Ferrel in an email. “Very spotty cell phone service and wifi; difficult to communicate with each other.”

Elsewhere in that city, Houston Independent School District and its in-plant are closed through tomorrow, and residents are experiencing many cold-related problems.

“None of the pipes are treated anywhere, so water is out over most of the city for the last 24 hours, and the power generators have mostly frozen up, so much of the state is without power right now, too,” noted Chuck Werninger, senior manager and records management officer of HISD IT Administrative Services. “We hit 12 degrees at my house last night and went 24 hours without power.”

Meanwhile in San Antonio — where snow covered the Alamo on Monday, a sight rarely seen — UT Print, the in-plant for the University of Texas at San Antonio, has also been closed.

Slightly less affected was the-plant of Oklahoma Gas & Electric (OG&E) in Oklahoma City, and for a very good reason: “We are the utility company,” noted Willis Jones, supervisor of Administrative Services. “Our shop never lost power.”

But though his operation did not close due to the arctic weather, he says snowy road conditions kept two of his staff from traveling to the shop.