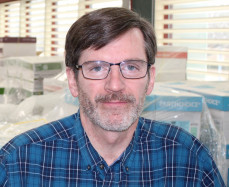 Rob Newlin, director of New Mexico’s State Printing & Graphic Design Services, has never been one for staying still. Growing up, his family moved all over the United States, with stints in Philadelphia, San Francisco, and Chicago as a result of his father’s corporate sales role. It was during these dynamic younger years that Newlin stumbled into printing through a graphic arts class.

“I have been hooked ever since,” says Newlin.

After graduating high school, Newlin got a job in a “mom-and-pop” print shop in the San Francisco Bay area. While there, he was advised to look into Cal Poly State University’s Graphic Communications program.

“They said it was excellent, and they were right,” says Newlin. “I was accepted, and just had a great time studying printing. They had lots of printing equipment, so they’re a very hands-on type of school. And they even have a student-run printing organization. [That’s] where I started, on the web press, and worked my way up to publishing division manager.”

From San Luis Obispo, Newlin was recruited by a business forms printer in Stillwater, Oklahoma, where he would stay for another 14 years.

“They transferred me all over the country,” explains Newlin. “I started in Oklahoma, then on to Texas, then on to California, and then Albuquerque, New Mexico. We got downsized in the early 2000s, as technology was eroding away business forms. There were a lot of plant consolidations.”

So, it was back on the journey for Newlin, who went into wine label printing on the West Coast, then to Tampa, Florida, where he worked in newspaper inserts.

Settling in the Southwest

Eventually, with family in Albuquerque, Newlin decided that New Mexico was where he really wanted to be. In April 2014, he landed the role of director at the State Printing & Graphic Design Services operation in Santa Fe, where he remains today.

“When I took over, we were spending more money than we were bringing in,” explains Newlin. “I had to turn that situation around. We had way too many people, we were staffed for the peaks of the business, rather than the valleys. In the printing industry, you have fluctuations.”

State Printing knows more about peaks and valleys than most. When the New Mexico House of Representatives and Senate are in session, the department is at its busiest.

“We can get 25% of our annual revenue in a single month. We have to make up to 250 copies of every bill, and there are hundreds of bills. This goes overnight, meaning I might pick up 150 bills from the House, 150 bills from the Senate, they could be anywhere from three to 300 pages thick, and they want to order 50 copies of those. We pick those up at 4 p.m., and deliver them by 8 a.m. the next morning.”

It’s a dizzying amount of work. However, the sessions are ongoing for only 30 or 60 days, so the department was too highly staffed for the rest of the year. Through attrition, Newlin downsized his team to seven members. So how does this scaled-back team deal with such a significant influx of work during the legislative session?

He is proud his in-plant ranked No. 7 on <i>IPI</i>’s 2021 ranking of the top in-plants according to sales per employee. Last year, it generated $276,065 per employee, due to the high volumes his lean staff is able to produce. The fiscal year that just ended was a “record-breaking year,” he says; the in-plant generated more revenue than in any year since he started, largely due to new work it has added from the state, municipalities, and nonprofits. The in-plant is working to expedite its processes, embracing a digital storefront to make ordering more efficient for legislators. 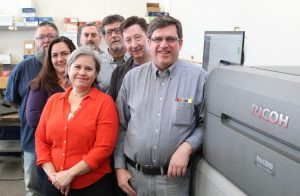 “The House and Senate can go online and order their typeset and order their stationery goods,” he explains. “Or they can just pull up the repeat information and reorder. This is already in place on the Senate side, and we’re implementing it on the House side too. Then we intend to roll it out to all of our customer base.”

Overstaffing wasn’t the only challenge Newlin had to contend with when he took up the mantle at State Printing.

“The department had burned a lot of bridges,” says Newlin.

What does a printer who doesn’t stay still do when there are relationships to mend?

“When a job had to be delivered, I said, ‘I’ll deliver.’ The team was definitely confused — I was the director! But I’m really hands on; I would go and deliver these jobs, and when I went out and met the customer, I got to know them and they got to know that there’s a new director and a new way of thinking at State Printing. And so this helped mend a lot of those bridges to a point where we have grown year after year ever since I’ve taken over.”

Getting out there himself was also a great lead-generation opportunity. He was able to promote other applications and services provided by the in-plant and continue growing the business.

“I would see other products and say, ‘next time that comes up for bid, could you give us a shot at that?’ So now it’s not only a delivery call, but a sales and marketing call as well,” he says.

Newlin also made some substantial equipment changes. “State Printing had been a Xerox shop for up to 30 years,” he says. “So when it came time for lease renewal, Ricoh sold me on the quality and efficiency of their equipment, as well as the bindery attachments. We have a Plockmatic inline saddle­stitcher. We have GBC punches for punching inline. All of that used to be done offline, so my throughput at the end of the month is greater, because the press is printing and finishing at the same time, so we’re servicing the customer better.” The in-plant replaced its Xerox equipment with two Ricoh Pro C9210 color printers and two Ricoh Pro 8320 black-and-white printers.

The “all hands on deck” mindset that Newlin has instilled throughout the business also helps State Printing better serve its customers.

“We all pitch in, even if it’s finance or graphic design staff,” he says. “We’ve all been in this industry for so long, we can float back there and tackle where the bottleneck is.”

Newlin likens the team to family, experiencing the highs and lows together and fostering a mutually respectful environment.

“So you just have to get to know the person and how to relate to them,” says Newlin. “I think that sums up my overall approach.”

One stand-out example of State Printing’s work is the printing it does for the Esperanza Shelter, which supports survivors of domestic abuse.

“After we printed and mailed their annual appeal mailer, they said, ‘you saved us $1,500 compared with the private sector prices. Do you know what we could do with $1,500 for the women we support?’” he recalls. “That made my heart flutter, because that’s exactly what we’re here for. We’re not here to make money, we are here to support government agencies and nonprofits. I always say that they have to think of us as their in-plant print shop, because that’s what we are; we’re not doing it for the profit. We’re in it to support you guys to save budgets, so they can redirect that $1,500 in other ways, to accomplish their missions.”

As for new services, scanning is becoming a more significant part of the business, Newlin says. Between the pandemic and the paper shortage, digitizing state records is becoming increasingly appealing.

Having been on the move his entire life, Newlin seems happy to make an exception for State Printing and stay put in the “Land of Enchantment.” He loves the friendly people, the weather, the mountain terrain, the New Mexican food, the galleries of Santa Fe, and the sight of hot air balloons dotting the skyline in the morning. In his free time, he loves to go hiking in the New Mexican desert, taking pictures of the beautiful terrain.

“I’d like to stay and retire here at State Printing,” Newlin says. “I would love another 10 years, if they’ll have me.”