As Jonathan Mayer sees it, supporting the students of Radford University is the principal mission of his in-plant. From giving tours to graphic design classes, to printing student projects and patiently answering their production questions, his operation is actively involved in the Radford University student experience. 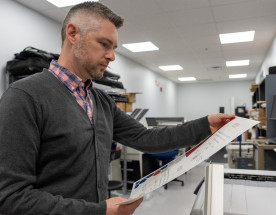 Manager Jonathan Mayer checks a proof printed on the in-plant’s Oki C942, which the shop uses to print much more than envelopes. The in-plant moved into its facility in late 2019.

“We’ve got a very strong focus within the university to be student oriented,” affirms Mayer, manager of Printing and Postal Services at the 10,700-student public university. A Radford alumni, he wants today’s students to be just as impressed with his in-plant as he was 20 years ago.

“I had a great experience printing things here when I was a student, and I want to give that same benefit to those who come after me,” he says.

Located in the rural western corner of Virginia, between the Blue Ridge and Allegheny mountains, the in-plant has little competition from local print shops. Consequently the shop gets a lot of its business from Radford’s student population. The number of one-off student jobs it receives, in fact, is more than the number of jobs the in-plant prints for the university itself; and though they don’t bring in the same revenue as the longer-run university work, the payoff comes in other ways.

“They get to work with a professional printing operation … rather than with a local smaller franchise within an office supply store,” he says. This not only gives students — many of them studying graphic design and interior/fashion design — a better experience with faster turnaround (and lower prices), but it shows them how a real-world printing business is run.

With three full-time employees — all Radford alumni — plus one part-timer and several student workers, the in-plant operates out of a 3,500-sq.-ft. facility about a half mile off campus and typically generates annual revenues of about $400,000. Using Xerox Versant 3100 and 180 digital presses, an Oki C942 envelope printer, and an Epson SureColor P10000, it prints a variety of items for university customers: recruitment materials, postcards, posters, retractable banner stands, greeting cards, booklets, brochures, notebooks, envelopes, and more. For students, the shop prints portfolios, resumes, design projects, and even business cards. 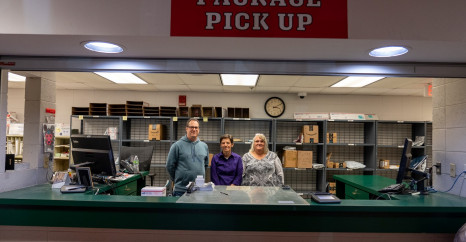 In April 2021, Printing Services was combined with Postal Services, and Ginny McCoy became director of Printing and Postal Services. That operation, located in a separate on-campus facility, has four full-time, one part-time, and 10 student employees.

The print shop moved into its current facility in late 2019, vacating an old, poorly maintained plant. Though the old shop was larger, it was not laid out for a modern workflow, Mayer says.

“Our whole layout was completely inefficient in the old space,” he says. “It was oriented toward offset press operations.”

With Mayer’s input, the new shop was designed much more efficiently, with equipment and paper storage located where they are needed, so work can flow smoothly through the operation.

When it moved, the shop left behind its Hamada and A.B.Dick presses, and added the Xerox Versant 3100, “which more than made up for what was coming out of the offset presses,” Mayer says.

Mayer and his team were still adjusting to the new facility when COVID hit, sending them all home. Production has picked up steadily since then, and this year’s revenues are on track to match last year’s, he says. February was one of the in-plant’s best months, thanks to a large order of recruitment pieces. 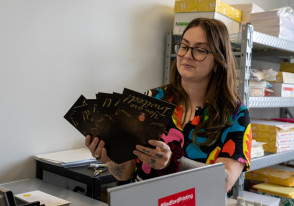 Graphic Production Technician Stella Fisher, fans out a set of invitations being finished on the Morgana Digifold Pro.

The in-plant does “a pretty good volume of envelopes” on its OKI 942, Mayer says. The device can print full-bleed envelopes and white toner on colored stock. Those features come in handy for printing covers for booklets, too, he says.

The Versant 180, with its ability to handle 13x26ʺ sheets, enables the shop to print full-size tri-fold brochures for Admissions and the Financial Aid Office.
Another popular service is photo printing, which the in-plant handles with its Mitsubishi CP-M1 photo printer and Epson SureColor P10000.

The in-plant’s capabilities are known outside the university as well, and it insources work from local businesses, artists, and nonprofits. This work, combined with student work, makes up about a quarter of the shop’s revenue, Mayer estimates.

“We’re pretty well known in the local community as a resource,” he says. “I see us as sort of an outpost in the community for the university at large.”

The in-plant has a business listing on Google, he says, and keeps in touch with the procurement department to learn about jobs being ordered from outside providers, so he can approach those departments about using the in-plant for future work. The in-plant also gets a lot of word-of-mouth promotion from students who have used its services and happily spread the word.

“We establish relationships across the campus that way,” Mayer says.

A 2002 Radford graduate who has worked at the in-plant since 2005, Mayer can identify with today’s students, and has a great rapport with the university’s graphic design instructors. They bring their classes on tours of the in-plant, and Mayer makes sure students understand that his staff is there to help them troubleshoot their files and find the best way to print their work. 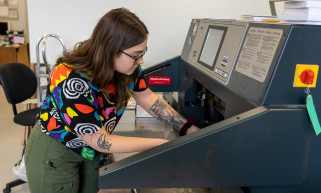 Stella Fisher on the cutter.

“After the tour, they know us as friendly faces who want to see them succeed, so they feel welcome,” he says. “The design instructors know that we’re a resource for any production questions that they might have.”

The in-plant has been so successful helping students that graduates sometimes return as customers.

To make it easier for students to get their work to the shop, he created an online ordering portal using Microsoft 365. This drastically reduced the amount of time and effort his team has to spend producing those jobs, and eliminated the lines of students in the lobby bringing in projects at the last minute.

“We can batch orders together more easily,” he says. “We can work it better into our daily workflows. It really increased the efficiency.”

Mayer continues to seek ways to improve efficiency and expand services. He is looking into contour cutting and digital embellishments like foil sleeking. (As this issue went to press he revealed he had just ordered a Cutworx Eclipse 2029 digital diecutter.) “We’ve just got to keep finding ways to save money and be efficient,” he says.

Mayer recently standardized the shop’s pricing using its real costs so he and his teammates can quickly price jobs and respond faster to pricing inquiries from customers.

Mayer is proud of his in-plant and of the level of cohesion and trust he and his staff have developed. They are a young team and rely on one another constantly, yet also take individual ownership of jobs and guide them through the production process. They all have design backgrounds and pride themselves on upholding university branding standards on all printed materials.

“We’re very strong on protecting and preserving and advancing the brand of Radford University,” he says.

Beyond simply printing jobs, Mayer sees the in-plant as an ambassador for the university and for the student experience.

“We offer a level of priority and focus that is unparalleled because our mission is the same,” he says.

John Sarantakos to Be Honored at IPMA 2022