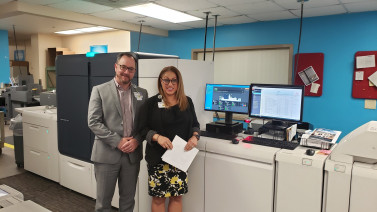 With a full shop revamp, the print center at Methodist Healthcare System (MHS) in San Antonio, Texas, is turning projects around quicker than it ever has before. 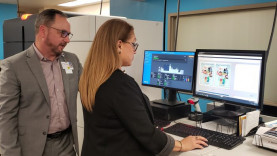 Michael Schaefer and Melissa Gonzales with the new equipment.

“The equipment is faster, the color is phenomenal, and turnaround time as of late is 97-98% meeting the customer’s request, and I’d say that’s the best we’ve ever had,” says Michael Schaefer, the division director of Support Services for the HealthTrust Purchasing Group — a division of HCA Healthcare, a joint owner of Methodist Healthcare. Schaefer was formerly the Print Center director for MHS and still supports the in-plant, which is now overseen by Manager Melissa Gonzales.

Before getting a refresh, the in-plant was always hesitant to take on jobs like magazines and newsletters, Schaefer says, but that’s no longer the case. The in-plant now prints two quarterly magazines and two newsletters. The full-color, full bleed magazines are up to 32 pages long, and the in-plant prints between 1,600 and 3,600 of them each quarter. 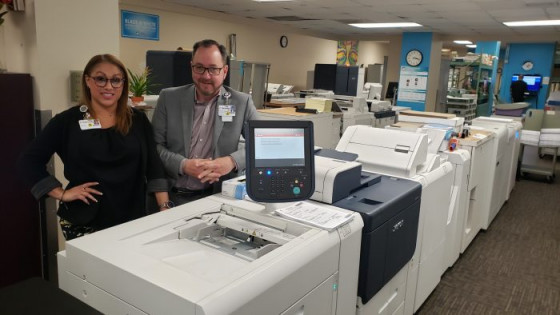 The Methodist Healthcare Print Center installed three Xerox PrimeLink B9125 monochrome printers. With one of them here are Melissa Gonzales and Michael Schaefer.

“It feels great that the Print Center has been able to use its equipment for that communication tool and get it to our workforce because our workforce isn’t on a computer all day; they’re not doing WebEx and emails. They’re having to rely on word of mouth or something that’s handed to them in the form of a magazine,” Schaefer says. 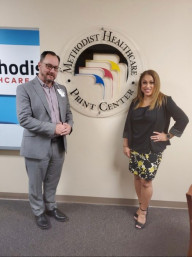 Not only does the new equipment improve the in-plant’s efficiency, but it will solidify it as a reliable source for its customers.

“There’s no doubt, with Melissa’s leadership and the new equipment, we’ve really improved that turnaround time. And that volume has grown. You can see that in the numbers each month,” Schaefer says. “Also, when you’re turning around things faster and you’re meeting the customer’s expectations, it builds trust.