Tapping new technology to provide unique, durable products in the wide-format space is becoming essential for in-plants as they strive to meet the growing needs of their organizations. In the process, they are increasing the value of their services.

With a staff of two full-time employees and 10 student assistants, the Print and Technology Center at San Jose State University (SJSU) recently took a significant step toward expanding its service offerings and value when the on-campus shop installed a Xanté X-55 UV inkjet flatbed printer in June. 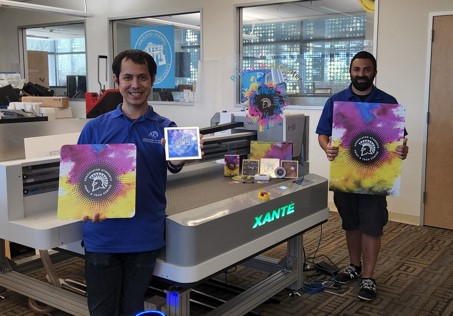 In seeking a flatbed, Manager Kevin Lowe says a primary motivation was a look toward the future.
“We’re seeing lots of growth in the signage and wide-format space,” he notes. “This will make it quicker and easier for university staff to get what they need.”

Further, Lowe says, the shop will offer a service that can’t be provided by the university’s fleet of copiers, enhancing its value.

In sourcing the new machine, Lowe says one big concern was how much space it would occupy in the 3,500-sq.-ft. shop, noting he was looking for acceptable print size, but with minimal footprint. Lowe originally considered the Xanté X-33, but found the print size too small.

While small in size, the new machine is rich in capabilities. It features a maximum print area of up to 55x50" (as compared to the X-33’s 36x24"), and boasts five print modes, ranging from 720 to 2,880 dpi. Adjustable print head height allows for printing substrates up to 3" thick — opening opportunities for ad specialty products. The UV curable inkset can successfully image on a variety of substrates including plastics, ceramic, wood, aluminum, foamboard, and glass.

Lowe appreciates the new machine’s ease of use. The two-day install included operator training, and he says the Xanté iQueue workflow software “is intuitive and easy to use.”

The in-plant’s learning curve included one key mistake: the shop adjusted the print heads too high off the substrate, which adversely affected image quality: a lesson learned.

While Lowe says the new machine, installed over a two-day period in June, “is still in a testing phase,” the San Jose, California, in-plant has strong plans for utilizing it in full production.

“We will be producing metal signage for the transportation department on campus,” he says. With the new system, this signage will be printed directly onto a metal substrate. Previously, he says, signage was printed onto pressure-sensitive vinyl using the in-plant’s HP Latex 335 print-and-cut machine, then mounted to metal and trimmed. The new machine, Lowe says, will save both time and materials.

Further, he says, “we are getting interest in printing acrylic award plaques.” His plans in this space include using the new machine for both direct and second-surface printing.

A third area of opportunity, he says, is with SJSU’s Athletics department.

“Athletics is a first focus,” he says. “They like to make stuff look really nice.”

The Xanté X-55 will serve to increase the in-plant’s value, “by giving a type of product the university didn’t have access to before,” he notes. “Printing these products on campus speeds things up for the university.”

“Outside vendors may not care as much about the branding being done right,” he points out.

Lowe says the shop’s PPP (Paycheck Protection Program) funds helped offset the cost. While Lowe says he does not have a hard ROI timeline for the X-55, he is counting on 10 years of use.

“ROI,” he says, “will be a matter of building new business and applications with the machine.”

The X-55 is not in place solely to meet the needs of SJSU administration and faculty either.

“The shop is open to students,” Lowe says. “So we could use the flatbed to help them with specialty projects.”

Wide-format Printing for the Hospitality Segment