A little thunderstorm didn't put a damper on the celebratory opening of a new facility in New Castle, Delaware. The area, only a few miles from Wilmington, Delaware, is the site of the new 8,100-sq.-ft. Fujifilm Imaging Colorants' high purity reactive dispersant (RxD) pigment dispersion production facility. Although the process to build and launch this facility — and a second planned on-site for 2023 — began in 2019, much of the process took place during the pandemic, a time when much of the world came to a halt. The investment of $19 million in this facility, along with an additional $28 million investment in the second facility, is telling of the growth planned for Fujifilm's Ink Solutions Group.

"This is a truly exciting day for Fujifilm, as we celebrate the opening of the first of two inkjet manufacturing facilities in New Castle," Ian Wilkinson, president and COO of Fujifilm Ink Solutions Group, said. "This underlines our commitment to the U.S., our commitment to Delaware, and through this we are delighted to be creating jobs and being a valued member of the local community.

A Day of Celebration

"It is truly an important day in Delaware," the Honorable Hall-Long said.

The expansion, which will create dozens of jobs in the state, helps to support state goals. Quaranta explained that Delaware is focused on workforce training and development, and the opening of not only one, but two, manufacturing facilities in the state will help to expand and meet the state's workforce goals. 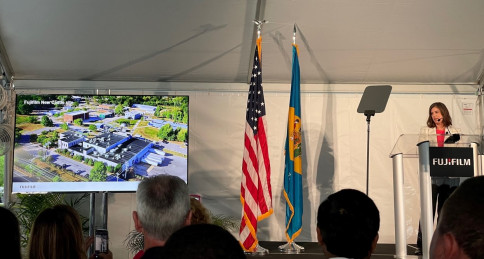 "We are proud to be a global company and household recognized name," Sato said.

The last of which is experiencing real growth, especially in aqueous water-based printing, Toledo said. Pigment dispersion, which is the technology used for the production of aqueous inks, was invented in 2005 in the U.K. Although production facilities remain in the U.K., this expansion will facilitate more efficient supply to the global customer base, she explained.

MacMillan then took the stage to provide a timeline of the process to open the facility. The idea was born in 2019, when the world was, understandably, a much different place.

"However, it's a project that's been delivered without compromise," he said.

The morning was continued with a ceremonial ribbon cutting to commemorate the launch of the production facility, followed by small group tours of the plant. One of the guides, Michelle Kelley, manufacturing and engineering director, Fujifilm Ink Solutions Group, explained the cross-linking centrifugation process, which is crucial to help keep the product pure and stable. "It's where the magic happens," she said. 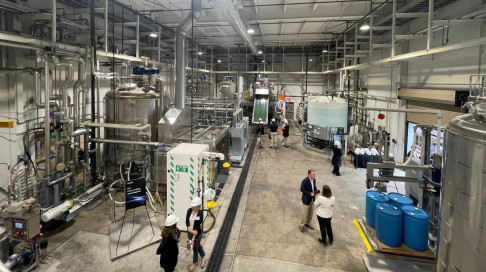 As the day wrapped up, Printing Impressions was able to speak with Wilkinson one-on-one about the expansion, despite the challenges of the past two years.

"A lot of companies suspended investment," he said, "but to continue to invest and spend when there was so much uncertainty reassured people. Fujifilm is here for the long run and this technology is part of the cutting-edge future."

Although there were challenges — especially with raw material availability, pricing, and shipping — the expansion just helps to build upon the already strong infrastructure of Fujifilm.

"We haven't been immune [to challenges], but this plant gives us greater continuity of supply," he continued.

Michael Bush, marketing communications manager, Fujifilm Ink Solutions Group, joined the conversation and explained that the ink produced at this facility is supplied for Fujifilm products, as well as other inkjet OEM ink systems. He continued that the new technology is "printhead agnostic," since the dispersions are provided to other ink formulators.

RxD technology is still in its early stages, Wilkinson explained, but the expansion in production will be critical as digital printing continues to grow, especially in the packaging market.

"That's where the brand owners want to go," Wilkinson said. "So, this is a true investment for the future."

Ecstasy With Your Poster? Inkjet Chemical May Be Addictive