As budgets continue to tighten, many in-plants are finding themselves looking for new sources of revenue and new services to make the operation even more valuable to the parent organization. One service many are taking a hard look at is garment printing.

In the SGIA-sponsored study “Convergence in the Print Industry: Understanding Growth Opportunities and Competition,” 22% of in-plants noted that garment printing is on the radar as a potential new service. It represents a relatively inexpensive way to add a valuable additional service to the mix.

One in-plant that has seen great success with garment printing is Ohio University, located in Athens. The in-plant, which employs 14 people plus two student workers, added the service 15 years ago, when the demand started to build.

“We were getting so many different departments on campus asking us about doing shirts,” says Director Blaine Gabriel. “So we started investigating it.”

As a result, the in-plant added a Brother direct-to-garment press. Today, the shop is on its third garment printer after recently upgrading to the Brother GTX, partially for the ability to print white ink, which allowed it to expand into printing on darker shirts. While Gabriel estimates the in-plant has only printed around 1,500 shirts in the few months since the upgrade, he notes that the operation has printed tens of thousands since adding this service.

In fact, Gabriel was so pleased with the results of his garment printing services, he started talking about it to other in-plant managers — including Drew Burgering, assistant director of Valdosta State University Printing & Copying Services, in Valdosta, Ga., which has three full-time and one part-time employee. Three years ago, partially on Gabriel’s advice, Burgering invested in a Brother GT-3 Series direct-to-garment press. 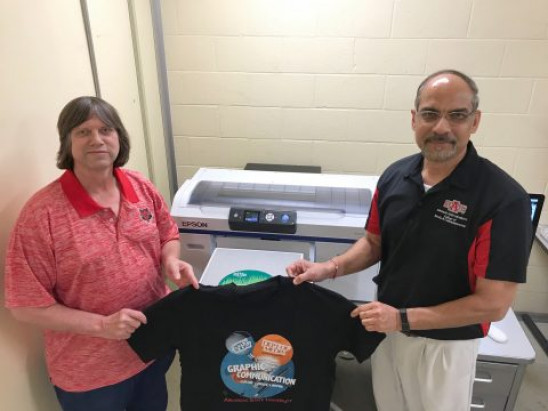 “At the conferences I’d gone to, I had heard others were doing it,” he says, “And they seemed to stay busy, and it seemed to be a good revenue stream.”

Some of that revenue comes from print jobs ordered by customers who initially only wanted a customized shirt.

“Everybody who has a t-shirt job has a print job,” points out John Wesseling, director of Communications Services at the University of Cincinnati. His in-plant has been printing garments with an mPower mP5 from Anajet, a Ricoh company. Offering a service like this increases the number of ways the in-plant can interact with customers, he notes.

“The more ways you can touch a client, the more ways a client will come back to you,” he says.

His in-plant has been getting steady garment printing jobs from organizations outside the university, such as community theater groups.

“I think that we can find as much business outside the university as we can on the inside,” he says.

How to Build a Business

Recognizing the opportunity that garment printing brings to an in-plant, and actually executing a business strategy are two different things, however. One way to build the business is to start with what is already there. Many organizations have a need for t-shirts, be it for events that require attendees to be dressed in clothing with the corporate logo, or perhaps a way for different departments within an organization to show individual pride. If an in-plant doesn’t offer garment printing, that is revenue that is automatically going to an outside source.

This is the strategy that Ohio University used, where the demand preceded the investment. That allowed the shop to jump right into offering garment printing as a service. That said, Gabriel recognized that for his operation, even with the equipment he has invested in, there is still a cut-off point where it makes sense to outsource.

“If it’s a really large order we look to outsource,” he notes. “If it’s 300 or less we do them right here — sometimes we’ve even done 500. It is just as quick to put it on there and be done, but it depends on the order and what the design is.” 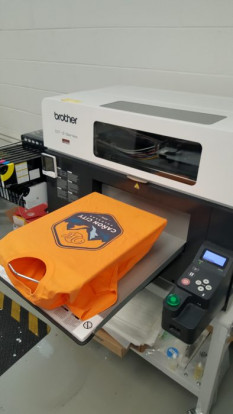 Burgering, however, took a different approach. He notes that his in-plant had some additional budget that needed to be spent or he would lose it. Between the recommendations he had gotten from peers, and talking to his design team, he determined to make the investment and then grow the service from there.

“I was looking for somewhere to expand, so I talked with the design group to see if they had a lot of requests to design t-shirts,” he says, “and they said they did.”

For Valdosta State University, taking the word-of-mouth approach has resulted in growth, albeit slower than Burgering originally expected. He estimates that the in-plant has done around 1,000 shirts since installing the equipment — projects that would have gone off campus previously. He notes that while the garment printing volume itself hasn’t been large, it has led to other business benefits.

“It shows people I can do whatever they need,” Burgering explains. “Now they ask me first before they look elsewhere, and that’s one of the things I want to instill: Ask me first. I can either handle it for you or go outsource it myself. If I can be their conduit it’s a win, even if I have to send it out.”

The individual volume of any one service might not be high, Burgering says, but the ability to say “yes” and build a reputation as the best place to go is just as valuable.

That approach of using garment printing to grow incremental revenue and build reputation is one that Tim Check, product manager at Epson Professional Imaging, supports. One way he suggests going about it is to approach jobs the in-plant is already doing, such as banners or promotional materials for events, and let the customer know that shirts or other garments are a potential add-on item. 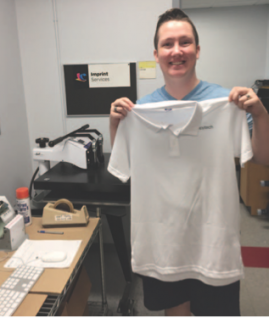 Massachusetts Institute of Technology’s Copy- tech operation uses a Sawgrass Virtuoso SG800 dye-sublimation system combined with a heat press to produce shirts, like this one being held by Allen Veldwisch.

“It’s a great way to get additional business revenue, and you don’t have to go very far,” Check says. “You can now provide more of a one-stop solution to that customer, with more products and offerings.”

Arthur Verwey, senior product marketing manager at OKI Data Americas’ Specialty Printer Division, is an advocate of investing in a garment printer that can do more than what the in-plant thinks it needs right now.

The ability to print on darker materials, in particular, was one of the driving reasons for Ohio University’s most recent upgrade. But it also came down to maintenance and quality.

“It lays a very good white,” says Gabriel, “and trapping is very good; the trapping on the old one wasn’t very good. The other one also needed more maintenance; even if it sat for a week there was a lot of maintenance. The new white ink uses a more liquid-friendly base that doesn’t dry like [the old one did], so the maintenance is very good. And the white is a lot more vivid.”

The ability to print white ink on dark fabrics was also a driving factor for Valdosta State University’s choice, with Burgering noting that maintenance ended up being something he was surprised about as well. He has found that the equipment requires daily and weekly maintenance to ensure it is fully operational, and the more use it sees, he notes, the better the overall quality tends to be. That aspect is something he would keep in mind when looking to invest again. That said, he doesn’t regret his purchase, but he does suggest that other in-plants take the time to do their homework before jumping in.

“Do your research and see what the true volume is, and what type,” he advises. “Do you need the capability to do dark shirts, for example? You have to pretreat the dark shirts, so that’s an extra step — it is actually four steps for dark shirts. So that’s what I would suggest: know what type of shirts are in demand, and the volumes.”

One place to start researching both the equipment and the business opportunities around garment printing will be at this month’s SGIA Expo, which will be held in Las Vegas, Oct. 18-20. It is a chance to talk to multiple vendors, as well as industry peers who have already taken the plunge. For those who have already invested, the 2018 SGIA Expo will serve as a prime source of innovative ideas that in-plant printers can bring home and put to use, providing a jump start to growing a fledgling garment printing business.

Garment printing has the ability to open up new revenue streams, expand relationships within the parent organization and give every department more reasons to make the in-plant the first stop when any new project comes along.

Three New Challenges of the New Normal
END_OF_DOCUMENT_TOKEN_TO_BE_REPLACED
Upcoming Webinars
Print Outlook: What to Expect in the Year Ahead