How Leading In-plants Prepare for the Outsourcing Battle

Print outsourcing firms are relentless in their pursuit of your in-plant’s business. Here’s how four leading in-plants have prepared for this battle.

An in-plant manager’s worst fears can materialize in an instant. When upper management calls with grand plans of outsourcing print production or placating a facilities management firm with a meeting, it is vital for in-plant managers to counter with detailed and up-to-date data. Being prepared with relevant financial and production numbers can be half the battle.

“We are going through that right now,” confides Al Goranson, Imaging Services manager at the University of Colorado Boulder. “Ricoh and Xerox are both giving a proposal for what their version of our shop would look like. That came from upstream. They [management] basically said that they see how we are valuable and they see how we make money, but maybe there is somebody else out there who would buy [the in-plant].”

When the proposal to potentially transition to an outside print vendor first popped up on campus, Goranson admits that he wasn’t pleased. But at least he was the one asked to manage the process, he mused.

“Actually, it is the best situation possible for someone in my position, because I was asked to do it,” he points out. “It wasn’t like they were tasking some person from an accounting or finance and budgeting office to do it without my knowledge.”

Goranson contends that he knew it was time to swallow his pride and fight to protect his in-plant and employees. Fortunately, Goranson is well prepared and armed with the numbers to show the shop’s value to the university, and he is determined to win this clash.

One way that Goranson shows the university how the in-plant is performing is by sending a monthly one-page document titled “Just the Facts” to the VP of finance, the auxiliary services manager and other executives. The document provides information regarding the shop’s job production, margins and financial stability.

“Everybody that is in my food chain gets one, and laterally I give it to all the marketing people,” he points out. The university in-plant also produces an annual report that is based on standards and benchmarks, and it details how the shop stacks up against outside printers.

Goranson adds that he also benchmarks the shop’s progress against other in-plants, using data and studies published by In-plant Graphics.

“It is extremely helpful [information], if you use it right,” he lauds. “If you have a good story to tell, you have to tell the people you work with so they understand it. It is hard to explain to people who really have no idea what you do. You have to show them what the industry looks like and where you fit in.”

Goranson suggests adding pie charts and bar graphs so that decision-makers not familiar with the printing industry can easily understand the information about the in-plant.

“We do everything with pictures because I found a long time ago that most people won’t read a paragraph,” he stresses. “If you can’t make it a sound bite situation, then they are not going to grasp what you are trying to convey.”

Oregon State Printer Tim Hendrix notes that his Salem, Ore.-based Publishing & Distribution operation has its own internal and external metrics used to prove the in-plant’s value. He contends that he does not compare his prices with the private sector because his shop has to partner with commercial printers.

“We outsource probably 40% of the work that comes into the in-plant,” he explains. “We are fully digital and don’t have offset presses, so there are some jobs we just can’t do in-house. Work is outsourced through a competitive bidding process.”

The core of the state’s printing needs, however, are handled internally. This includes secure printing that involves financial documents, HIPPA information and other private data. Having an in-plant helps the state ensure security for its residents.

“The infrastructure, security and reputation we have here has helped avoid the question of why we shouldn’t have things printed somewhere else,” Hendrix adds, noting that it has been about seven years since there has been any inkling of shutting down the in-plant.

“One of the reasons I think we are successful is that we focus on what we do best and what is best for the state,” Hendrix says. “Being able to prove that and show that information is important to have in your back pocket.”

This includes conducting customer satisfaction surveys and posting the results online; building a one-stop shop for the state’s printing needs; and comingling mail to garner volume discounts from the U.S. Postal Service.

“There are different measures of value,” Hendrix maintains. “You can just look at the dollars. However, that is only part of the story. Making sure that you keep customers satisfied along with verifiable metrics is very important.”

Back from the Brink

In Fond du Lac, Wisc., Mike Schrader, manager of Printing and Mailing Solutions for Brunswick, recalls facing a serious threat to his shop’s future. About seven years ago, the company’s management had a plan to shutter the in-plant and outsource all printing services.

“We were basically told that we were gone,” Schrader flatly states. “They allowed me to help them find where they were going to go. Since I was on that team, I basically helped them find their way back to me.”

Schrader notes that the company requires his shop to make 20-25% in profit annually, after expenses. While navigating the outsourcing scare, Schrader was able to use internal figures to prove that keeping the in-plant would save the company money in the long-run. 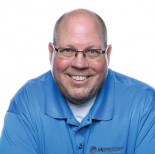 “Another step I took was to show them the costs that the company would retain if the shop closed,” he continues. “This included hiring a purchasing person to buy everything. The financial people determined it would actually take two purchasing people to do all the work. Once you put that cost back in, it is a no-brainer.”

Today, Schrader tracks and reports all of the shop’s expenses and has remarkably kept the in-plant’s prices steady for the past two decades.

“The reason we can stay competitive is our company is big into Lean Six Sigma, so we put a lot of effort into trimming costs,” Schrader says, adding that he continually finds new ways to eliminate waste and to take process improvement steps.

“But the bottom line is money,” he admits. “As long as the numbers make sense, we are usually pretty good.”

No matter how well prepared or respected an in-plant manager may be, it remains essential to have data to prove the shop’s value to the business when challenges arise. A facility management takeover could evolve from something as simple as an eager executive — looking to make a name for himself and pad his resume — deciding to outsource an in-plant to show short-term financial gains for the parent organization.

“But if you are going to go down, go down swinging,” Goranson, of the University of Colorado Boulder, concludes. “We are working with outside vendors right now even though we have an exceptionally good story. We have a significant amount of money in our accounts and we contribute to the university regularly, but the university still wants to see in writing — from someone other than me — that we represent the best value for the community.”

Michael George, director of Central Services at Villanova University, recounts a time a few years ago that an outsourcing company contacted his previous supervisor. The company was relentless in its requests for a meeting, he recalls, including sending management treats like oversized and personalized cookies.

George agreed to meet with the firm and hear them out.

“I put together a two-page list of questions,” he explains. “They were questions that I knew they couldn’t answer.”

George hammered away with questions regarding the facilities management firm’s future vision for the suburban Philadelphia university’s in-plant. He asked whether the company understood the higher education environment, and how it would handle contractual agreements and changes in print volume.

“I also asked if they have good references that show that they can provide quality services and customer satisfaction, as well as the ability to produce financials from those references,” George says. The meeting quickly ended when the company’s inexperienced sales representative failed to get through a handful of questions.

George makes a point of ensuring he is highly visible on campus and regularly attends and contributes to meetings with university decision makers.

“The printing environment is changing almost daily,” he stresses. “To remain relevant, you have to constantly ask questions around your institution. You need to inject yourself into conversations ahead of the planning process.”

Another opportunity for the in-plant to bolster its reputation on campus centered on the Villanova Wildcats men’s basketball team leading up to its 2016 national championship run. George noticed a lack of signs and banners at basketball-related events during the NCAA tournament and stepped up to provide materials to students and fans. In-plant employees even came to work on a day off to produce supplies and deliver them to the championship parade.

Three New Challenges of the New Normal
END_OF_DOCUMENT_TOKEN_TO_BE_REPLACED
Upcoming Webinars
Print Outlook: What to Expect in the Year Ahead