The in-plant community lost one of its kindest, most devoted supporters last Friday when Brian A. Wadell, director of Repro Graphics at the University of California, Davis, passed away at the age of 64 after a seven-month battle with pancreatic cancer.

"He was a very kind man. He always took time to talk to people and listen," reflects coworker Christy Pearce, now serving as interim director. "He was always in here early and stayed late, and was pitching in wherever needed. It wasn't like he sat in his office and directed; he was on the floor doing stuff as well."

Despite coming to the in-plant without a print background, he was not afraid to get his hands dirty on the equipment.

"He could run most any of it," Pearce remarks.

"“Brian was more than a customer to us. He was genuine, had incredible integrity, was humble and kind," says Elisha Kasinskas. marketing director at Rochester Software Associates. "He was a great supporter of his staff, and I know that his family and faith were important to him. He will be missed.”

Mr. Wadell became a part of the UC Davis Repro Graphics operation in June 2007 when he was asked to help set a strategic direction for the department. He was named director in November 2008.

Though new to printing at the time, he had spent most of his career around colleges and universities, supervising dining operations. He had previously served as senior VP of campus services with Sodexho, a food and facilities management provider, and found it a pleasant surprise to learn how transferable his management skills were to in-plant printing.

"Printing, like catering, is all about clients trusting you to make them look good to their constituents," he noted at the time.

He went on to enhance the in-plant's ability to meet client expectations by supporting the installation of the shop's first digital color press in September of 2008, a six-color HP Indigo 5500. Seven years later he was instrumental in adding a dual-engine Kodak Digimaster HD300 with interchangeable dies for hole punching to satisfy customer demands. When the in-plant needed to relocate in 2016, he searched out a new location and oversaw the shop's move.

"I really enjoyed talking to him," he says, and particularly hearing his suggestions for improving the product. "I will miss his insights and his smile."

Beyond his role at the in-plant, Mr. Wadell supported the university by serving as Chair of Staff Assembly where he represented all staff on campus committees, with UC Davis administration and in the community. His participation kept him in front of the in-plant's customers, which he enjoyed. 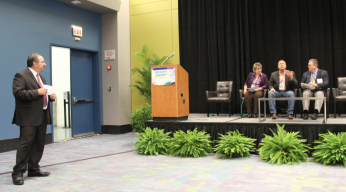 Brian Wadell (right) on a panel with other managers in 2015. Click to watch video.

Though often reserved at the in-plant conferences he attended, Mr. Wadell was always happy to share his knowledge to help fellow managers. He gladly participated in panel discussions at events, like this one. He graciously contributed to articles in IPI, such as this one about the benefits FSC certification brought to his in-plant. He even penned an article of his own for IPI in 2011 called "10 Ways Your In-plant Adds Value" in which he detailed all the ways his in-plant benefits UC Davis. His hope was that other managers could use his list to proactively prepare their own justification report.

A lifelong Californian, Mr. Wadell loved sports and often stopped to chat with his staff about sporting events. He rowed on the crew team while attending UC Irvine, played racquetball at BYU and always enjoyed softball. Back and shoulder issues ended much of his sports participation but he enjoyed attending and watching baseball, football and golf on TV.

An active member of The Church of Jesus Christ of Latter-day Saints, Mr. Wadell served a two-year mission to Uruguay and Paraguay in 1972. After returning, he attended and graduated from BYU in Utah with a bachelor’s degree in Business Management.

Despite his youthful appearance, Mr. Wadell had 14 grandchildren. He is survived by them, his four children, his parents and his wife Betty. His services will begin at 3 p.m. Friday, May 31, at The Church of Jesus Christ of Latter-day Saints in Dixon, Calif. Donations can be made in his name to the NorthBay Cancer Center.

VDP for In-plants: Variations on a Theme