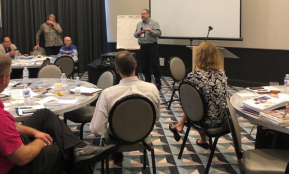 Mike Lincoln talked about how production inkjet has changed his in-plant.

Last week in Topeka, Kan., dozens of in-plant managers met for a Public Sector Symposium organized by the In-plant Printing and Mailing Association (IPMA). State printers from Colorado, Michigan, Pennsylvania, Tennessee, and Kansas attended the event, along with managers from the in-plants at the New York City Police Department and Palm Beach County, Florida, plus five higher-ed in-plants and one K-12 in-plant. More than 40 attendees participated in the event.

Some of the in-plants in attendance.

The symposium, part of IPMA's ongoing series of Roadshows, featured one day of educational sessions and a second day for touring the State of Kansas Print & Mail Services, overseen by Cheryl Buxton. With 35 employees, the Division of Printing has been providing printing and mail services for all state agencies including the legislature for over 100 years. 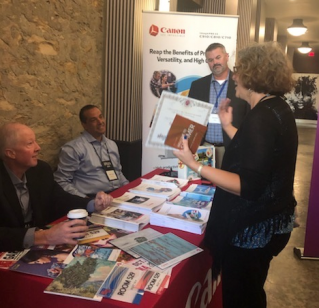 An attendee talks with Canon representatives.

Buxton welcomed attendees to Topeka on the first day. She related her experiences as a non-printer coming into a printing environment, and talked about the challenges she faces and  her plans to increase the value of her facility, its equipment, and its personnel. She was followed by a session presented by Ricoh.

"Debbie Pavletich from Ricoh had a very through educational session where she covered just about everything technical and workflow related in order to be successful as an in-plant printer," praised attendee Julio Rosado, from the NYPD's in-plant.

Other sessions were led by IPMA partners Canon and the United States Post Office.

Mike Lincoln (State of Colorado) and Marcie Carr (Commonwealth of Pennsylvania) spoke about production inkjet printing and how it has changed their in-plants. "Together they covered most of the concerns regarding the investment, planning and managed workflow that comes with the move [to inkjet]," noted Rosado. 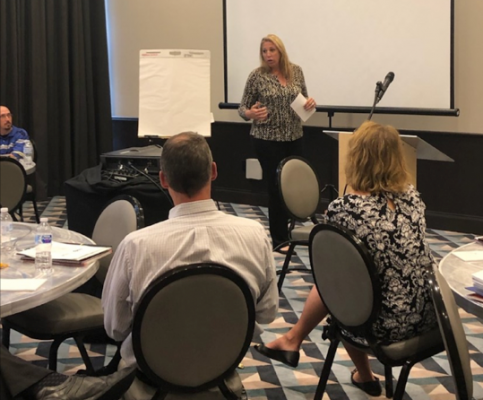 Marcie Carr, with the Commonwealth of Pennsylvania. 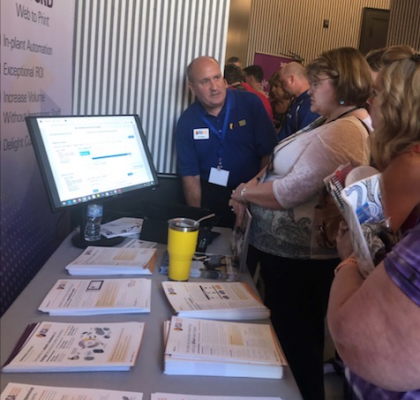 In between sessions, attendees visited the displays set up by the event's eight sponsors.

Attendees spent a good deal of time networking. They shared some of the projects they are undertaking in their shops and gave one another advice to help with challenges. During a roundtable discussion, they spoke about topics ranging from succession planning to equipment purchases.