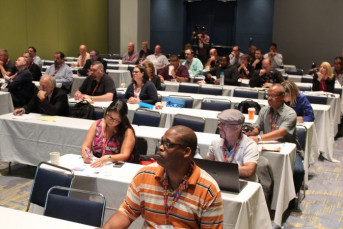 Bronowski discussed her print center’s two-year search to add a production inkjet press. The growing hospital system has maxed out its current digital production equipment, with speed (job turnaround) and equipment reliability becoming an issue in the last six months. Bronowski believes that inkjet will meet the needs and goals of the organization and offer a three-year ROI.

Hoping to have a press in place by early 2018, Bronowski anticipates the new equipment will enable the print center to keep pace with projected growth and help ensure that UPMC meets government-regulated SLAs for transactional work (i.e. health care-related printing such as statement of benefits, lab results, etc.). 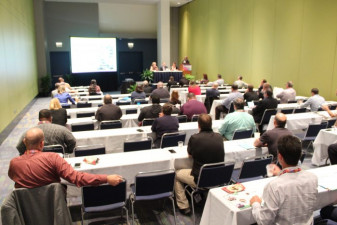 Bronowski noted the importance of taking the time to conduct thorough research, stating, “It has to be more than just, ‘I need this to satisfy my customers.’ There is so much more to look at.” As part of the research process she discovered electrical and space implications, and has worked with an architect for “creative movement” of equipment that may entail splitting up the finishing department’s machines.

Vainstein talked about The World Bank Print and Multimedia Center’s evolution with Virtual Reality (VR), showing a short video while he spoke. The group began experimenting with the technology when it acquired a 360 camera three years ago. Putting a camera in the hands of traveling staff offered the opportunity to show roads, rough conditions, current projects, etc., to complement printed reports.

VR creates a sense of presence and a feeling of empathy and connection. This service has helped the in-plant become part of the World Bank solution and changed the way the department thinks. Vainstein gave examples of possible uses in other verticals and suggested, “Give staff time to play. Let them use the technology. Explore. Don’t stop them because it’s not core business. They will be encouraged to want to come to work and provide a service that will add value in the future.”

Lockett shared her shop’s efforts to expand its wide-format printing business. Though the in-plant had a well-established wide-format business with the continuing education department, purchasing a latex printer opened the doors to expanding new services on campus. Business with the athletics department has grown exponentially, with applications ranging from wall graphics and window film to floor graphics. An investment in a Graphtec cutter for vinyl diecut letters has brought in business branding offices. 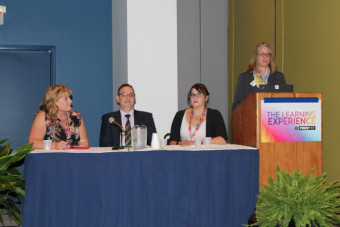 Challenges for Sacramento State’s wide-format business include fire regulations. In meeting with the fire marshal to ensure that all materials met fire codes, Lockett’s team learned that the manufacturer’s testing on some of the materials wasn’t recent enough, necessitating a revamp of inventory and the materials used. One customer wanted elevator door wraps, but the in-plant found that elevator doors are considered fire doors and can only be covered 10%.

Lockett noted that one of her measurements of success is seeing projects come back in-house. Her future plans include vehicle wraps for all of the delivery and mail vehicles; parking shuttles; and branding, signage and floor graphics for campus parking structures.

Bronowski discussed her operation’s onboarding process for the new hospitals UPMC is purchasing. Many of them were outsourcing printing, so she has to set them at ease that the in-plant will not gouge them on pricing. For new hospitals that had small copy centers, she has to close them and try to find a position for the employees there.

“We have to be very careful in how we present this to them on how we’re going to bring all this new work into the centralized location,” she said.

Vainstein talked about a cut sheet refresh in the World Bank’s copy centers. He noted that over the years they collected many print devices, which have become hard to manage. So the in-plant put out an RFP for new cut-sheet devices. Four months ago, nine new Ricoh devices were installed: three monochrome, four color and two high-capacity MFDs.

The in-plant also refreshed its binding and cutting equipment and has moved from perfect binding to square back stitching with an offline Watkiss PowerSquare 224 for its operational reports. The shop has also invested in a Horizon HT-1000V cutter, which is well suited to the high volume of inkjet the shop produces. The in-plant moved to the new cutter to end the bottleneck caused by its previous small cutter.

Lockett discussed her initiative to replace the shop’s MIS system and add a Web-to-print solution because of the need for access to data analytics for decisions and communication to upper management. Lockett and her team have been doing a lot of process analysis, mapping both the projects and the workflow and conducting a lot of product demonstrations. She plans to choose a solution in the next couple of months and implement by spring.

“It is a really super ambitious goal, but it’s something we really need to work towards accomplishing to improve efficiencies,” she said.

Related story: How One In-plant Automates 86% of its Workflow

Elisha Kasinskas is Rochester Software Associates’ (RSA) award-winning marketing director. She is responsible for all marketing, public relations, social media and communications, and community building for the firm. Ms. Kasinskas joined RSA in 2010. She is a marketing veteran with more than 20 years of experience in sales, product management and marketing in leading product and service business-to-business and business-to-consumer firms, including Pinnacle (Birds Eye) Foods, Level 3, HSBC, and a number of regional high-tech firms. She holds an RIT MBA and a BS, Marketing from Radford University. Kasinskas is a frequent moderator for industry speaking sessions, an in-plant blogger, and has received industry awards including the IPMA Outstanding Contributor award. She was an OutputLinks Women of Distinction class of ’15 inductee. Her marketing work with IPMA has secured multiple awards from the American Marketing Association (AMA).

What Good Do In-plants Do? 'Plenty' Say IPMA Panelists

From the Editor: In-plants Aplenty at PRINT 17