About 3,300 electric utility companies provide power and other essential services to industrial, commercial, and residential users in the U.S. Many of these utilities rely on in-house printing operations for fast, efficient service, and the kind of dedicated support only an internal operation can provide.

“We are so embedded into the organization, it’s a company support resource,” declares Brandy Powers, director of brand, advertising, and customer communications for NorthWestern Energy, in Butte, Mont., a post that also includes supervision of the eight-employee in-plant. “We provide that one-stop-shop resource that isn’t always easy to find these days.”

Powers’ in-plant, like the other four utility in-plants profiled in this story, produces a familiar mix of internal documents for the energy company, as well as printed communications for the company’s energy-using customers. Two of the in-plants we spoke with are also in charge of printing and mailing monthly statements.

As in-plants, they’re self-reliant, committed to efficiency, and proud of the quality and convenience they deliver to their customers. Though they don’t think of themselves as functionally different from other in-plants, they recognize that the special environment in which they operate binds them to rules and constraints in-plants at other organizations don’t have to contend with.

“We’re more unique in that we are a publicly owned power company,” notes Taylor Heins, manager of purchasing and warehousing at the Lansing Board of Water & Light (BWL), in Lansing, Mich. “We’re owned by our rate payers, which also leads to a more limited budget.”

Nevertheless, Heins and her staff of three have been able to grow the in-plant from a copy shop to a well-equipped digital print center by making a convincing business case for its expansion.

No ROI, No Interest

Troy Ahonen, print production supervisor for the Minnkota Power Cooperative, in Grand Forks, N.D., understands what it is like to stay productive within tight budgetary limits. He has watched his shop’s staff shrink from five people to two, a reduction achieved, he says, “through attrition and the efficiency of our digital equipment.” The Minnkota in-plant’s objective, he emphasizes, is to be a full-service print shop “without spending a lot of money” on hardware. “If there’s not a return, I don’t want to invest in it,” he says. 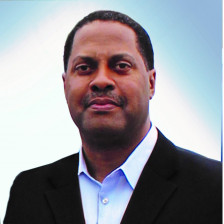 Willis Jones, supervisor of Administrative Services at OGE Energy Corp., in Oklahoma City, expresses a central fact of life for in-plants serving energy companies: “I’m sure if you talk to any other utility print provider, they will tell you that the regulation is what drives capabilities,” he says. “It is hard to get around that.”

One activity that regulation prevents his shop from taking part in is printing for outside customers as a revenue source, which the utility’s governing commission doesn’t permit. Although Jones believes the nine-employee in-plant could do this profitably for the company, he knows that the rules are the rules.

“We are treated as a cost center, not necessarily a profit center,” he reflects. “I’m not upset about it, but we could pay for our services. It’s kind of frustrating that we can’t do that.”

Regulation can also dictate the pace at which a utility in-plant has to perform, something that Dawn Tenneson, supervisor of Print and Mail Services for Otter Tail Power Co., in Fergus Falls, Minn., has seen happen more than once. She points out that when electricity rates change, messaging must go out to rate-payers “in a very short time frame. Your press schedule does not come into play.”

The last-minute printing of a regulatory bill insert can be a challenge, Tenneson adds, but she insists her team works well under pressure.

“Regulations impact the entire business structure,” says Powers, of NorthWestern Energy. “So being diligent, controlling costs, and adding value in terms of customer and employee communications are always top of mind.

“Our customers trust us to be good stewards of the environment as well,” Powers adds. She says awareness of that responsibility was behind the decision to choose an FSC-certified paper for Bright, a new quarterly magazine for customers that the shop has just started to print and mail.

From In-plant to Mailbox

Other than their regulatory accountability, these shops are cut from the same operational cloth as most other in-plants. The two that print billing statements, OGE Energy and Otter Tail, do it in large monthly volumes on high-output digital equipment.

Jones says that with the help of four monochrome digital presses from Ricoh and Xerox, and inserting systems from Pitney Bowes, the OGE Energy in-plant can turn out an average of 55,000 to 75,000 billing statements and 48-hour cutoff notices per day, or about 1 million pieces per month. Riding with the bills for residential customers is a single-page monthly newsletter.

All told, billing accounts for about 90% of the OGE in-plant’s workload. The shop, Jones adds, acts as a “seamless customer” for the U.S. Postal Service by sorting the mailing pieces in walk sequence, applying intelligent bar codes, and using USPS compliance tools to validate accuracy.

A newly installed Xerox Baltoro production inkjet press will let the Otter Tail in-plant move away from producing billing statements on preprinted shells, according to Tenneson, who says the workload consists of 20 billing cycles per month averaging 4,500 to 7,500 pieces per cycle. Inserts accompanying the bills will be printed on the Baltoro, which replaces a pair of offset presses the 11-employee shop used to run.

The parents of the other three shops outsource their billing to providers that specialize in transactional printing. Ahonen notes that over time, the billing volume from the 11 members of the Minnkota power cooperative became more than the group’s in-plant could handle. Heins similarly says that apart from the short runs of “special arrangement bills” that the Lansing BWL in-plant prints from time to time, billing is no longer within the shop’s purview.

Whether they print customer bills or not, the shops routinely produce the full gamut of items that typically come from in-plants. They all have wide-format equipment for signs, banners, and posters. Each offers design and creative services provided either by the shop’s own personnel or by graphic artists in other departments with which the in-plant is associated. 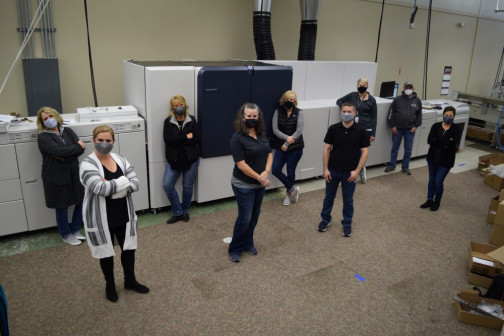 Heins says the Lansing BWL shop also prints for community events such as chili cookoffs, 5K runs, and “Silver Bells in the City,” a local pre-holiday festival. The Minnkota in-plant prints literature for the management group in charge of Project Tundra, an initiative to build the world’s largest CO2 capture and storage facility in North Dakota.

The printing for Project Tundra is an example of how power company in-plants can find themselves working closer to the public sphere than other types of in-plants.

“A lot of what we do is keeping our customers informed on different EPA changes, and things that we see on the horizon coming up,” explains Ahonen. “Twenty years ago, coal was a hero in this country. Now coal is not that popular anymore.”

He says the Minnkota in-plant is doing its part to promote the steps the cooperative has taken to reduce carbon emissions while remaining a reliable source of electricity.

“We don’t do much that actually impacts the grid, but we do a lot in trying to help our audience understand how the grid works,” states Powers. She notes that the building that houses the NorthWestern Energy in-plant is Green-e certified for meeting the highest standards of renewable energy usage. In keeping with what the utility’s customers expect, “we are energy-conscientious in how we operate,” Powers says.

With the resources and capabilities they have, the shops seldom have to outsource. It happens at OGE Energy only when the marketing department wants “very extravagant pieces” the in-plant doesn’t have the means to produce, according to Jones. The shop, which has the right of first refusal, then can either locate an outside source or let the customer find a provider.

Billing, says Powers, is the only type of printing the NorthWestern Energy in-plant doesn’t provide for the parent organization. It covers everything else from payroll — including W2 tax forms for employees — to regulatory paperwork, such as rate filing statements. Literature for the utility’s walk-in customer centers also comes from the in-plant.

Ahonen notes that about all the Minnkota in-plant ever buys on the outside are signs on metal and vinyl, and long runs of envelopes. An envelope press is on his wish list. But he says that for the time being, a local partner is giving him a good deal on envelopes in large quantities. 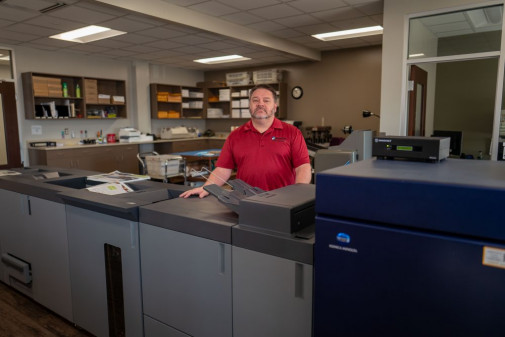 To different extents, the in-plants also serve customers other than their parent organizations. Even though the OGE Energy in-plant is barred from printing for pay, it can print for schools, state agencies, and nonprofits as a gift-in-kind, Jones explains.

Ahonen says the Minnkota in-plant prints for municipal power companies outside the cooperative, along with a small group of nonprofits and local print shops that sometimes come to it for help. Everyone pays, although the nonprofits receive a donation in the form of a reduced charge for labor.

The most active insourcer is the Otter Tail in-plant, which Tenneson says gets about 35% of its work from external customers. They include local printers, newspapers doing commercial print work on the side, city agencies, and area hospitals.

Insourcing, according to Tenneson, provides a variety of projects, and with strategic scheduling keeps the shop’s equipment running and balances well with company work. But the shop’s strict rule is that Otter Tail Power electric customers will never be made to bear any of the cost of printing done for external print customers.

“We have dotted every i and crossed every t to ensure that we don’t do that,” Tenneson declares.

The five shops enjoy what appear to be rock-solid relationships with their energy-producing parent companies. Only Jones reports having to fend off regular attempts by providers of managed print services to sell his management on outside control of the in-plant. He says he’s always been able to deflect them by demonstrating why an internal supply chain for printing makes the most sense for OGE Energy.

Heins speaks for herself and the rest when she says that at the Lansing BWL, “it doesn’t even enter into anyone’s mind to question that maybe we should be looking elsewhere.”

Like every other in-plant, a shop attached to a utility company survives by making itself indispensable.

“We don’t just wait for a need to come to us,” Heins says. “We help departments identify ways to utilize us.”

Tenneson notes that, as employees of Otter Tail Power Co., she and her staff have ownership in the products they create and take pride in producing high-quality work while meeting deadlines. That, in her opinion, is the value an in-plant facility provides.

“The biggest thing is that we still add value to the company,” says Ahonen of the two-way loyalty between the Minnkota in-plant and its management. “Our cooperative members want our services more than ever, and we also have the full support of our board of directors. We have the ability to control costs, and we get the information we want out when we need to get it out.”

Ahonen explains how a small-footprint, high-output shop that prints more than 3 million sheets of paper per year stays ahead of the demands placed on it: “We just try and get more and more efficient,” he says. “If we can find a way to gain five minutes, we will change our process to gain five minutes.”

Here’s a snapshot of the utility company in-plants profiled in this article: