Innovation Over Tradition at Welsh University

Print Manager Richard Ashdown explains that it typically results in the Print Studio (or Stiwdio Argraffu in Welsh) printing items twice; it’s better to produce two versions of a graphic, he contends, than to create a potentially cluttered bilingual version. And a design featuring a large header on a graphic in English with Welsh underneath won’t cut it, as this could be viewed as prioritizing English.

Ashdown and his team are not Welsh speakers, however the university does have an internal team that provides Welsh translation. This can be a challenge when a quick turnaround is required, however, or when customers are informed that the Print Studio must comply with the policy.

Over the past year, like similar institutions all over the world, Cardiff Metropolitan University, located in Wales, in the U.K., has experienced immense change. Luckily for Cardiff Met’s Print Manager Richard Ashdown, change is something he has embraced during his 15 years with the Print Studio, which has locations in both the Llandaff and Cyncoed communities in Cardiff, the capital of Wales.

Since long before COVID, the ways in which educational establishments utilized print has been shifting dramatically. Remaining not only relevant, but the preferred choice for print projects has been paramount to the success of Cardiff Met’s in-plant. Ashdown attributes this, in part, to the artistic, creative backgrounds of his team, and the fact that his five full-time and two part-time employees don’t shy away from trying new things. 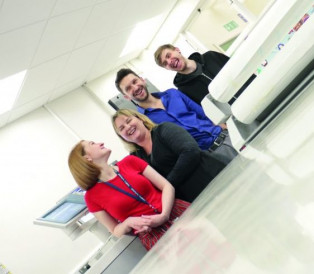 “We’re all quite creative in ourselves, and everybody on the team has design capabilities,” he explains. “It’s something we look for when we’re hiring new people. When I started, I was part-time in the Print Studio, but I was also doing an illustration job. I was enjoying the print so I went full-time, but I’ve always tried to maintain that, and do what I can to use those illustration skills and graphic design skills to make the most of what we’ve got and meet the evolving needs of the studio. Everyone is generally keen to just mess around and try new things. We use the studio as a bit of a showcase and a trial ground.”

An interesting way in which this attitude manifests is through equipment acquisition; Ashdown isn’t afraid to bring in a machine his team believes will provide benefits, and then find the value through experimentation. Most of the large production equipment is at the Western Avenue Print Studio on the Llandaff campus, where Ashdown is primarily based.

“We’ve been quite lucky in that we’ve been able to invest in machines without having to meet a requirement that exists at that point in time,” he explains. “We had a poster printer back when I started, producing paper posters up to about A0 [46.8x33.1˝] in size, which we replaced with a vinyl print-and-cut machine. We were quite pioneering in that respect because they were fairly new on the market; it was one of the first Roland machines. We were all quite keen to jump in, start cutting and sticking it down to see what worked and what didn’t. It was very much a ‘let’s try it and see what happens’ approach, which is how it’s always been. We try new things as a team, and we’re not afraid of it going horribly wrong. That’s how we found quite a lot of the processes that we use today, just through trial and error.”

One example of how Ashdown and the team evolved to ensure their business remains the obvious choice for students and staff is in the way they leveraged their technology to provide uniformity and consistency in style and branding across products.

“Our Roland UV LEF-20 does white ink and clear, so as much as we can we’ve tried to replicate that across our other machines,” Ashdown explains. “We’ve fitted our most recent Roland with white ink as well, and we’ve also got a Ricoh Pro C7100X production digital printer, which we have fitted out with the optional 5th color unit, so it has interchangeable white or clear. We’re creating that consistency across different materials and products, so you could have a clear varnish on your business cards and then you could do the same thing on your sign. That’s been quite successful, and it’s the sort of thing the team really likes because they can play around with it and push the boundaries.”

An Opportunity for Embellishment

As the print requirements of the university continue to change, the embellishments and enhancements Ashdown describes become more valuable.

“As the traditional print — such as student project hand-ins and course workbooks — declines, something like a standard booklet on 80-gram paper is quite a hard sell, because people say, ‘I’ll make it a PDF,’ or ‘I’ll move it online,’” he notes. “As soon as you start doing these specialist papers with spot varnish, you put it in someone’s hand and you can see their reaction to it is different.” 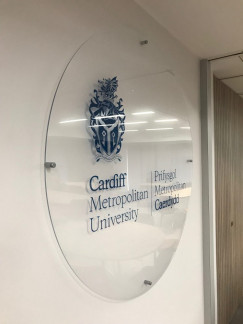 The in-plant has used the 5th color station on its Ricoh Pro C7100X to do this by printing envelopes and parking permits on a metallic paper, for example. But the shop also prints plenty of other everyday items like business cards, booklets, trifold brochures, flyers, and posters.

“With the student’s dissertations, they used to hand them in because they had to. Now we find students want some sort of record of the work they’ve done in the form of a high-end bound book,” Ashdown continues. “We’ve looked at ways of using our Roland UV machine to print the cover and achieve a built-up 3D effect with the logo, so that it looks far nicer than ever before. It’s a lot more time consuming and a lot more expensive, but I believe we’re still a lot cheaper than the ‘high street’ equivalent on that. They tend to want three or four copies because parents want one, or they want one to take to job interviews. The traditional print is far reduced, but with little additions like this we chip away at the difference.”

While the in-house expertise serves as a selling point, emphasizing the value of the in-plant can still pose some challenges.

“I think the perception is often that if they look outside our studio to what they consider a ‘specialist company’ to wrap some windows, for example, they’re going to get a better finish than if we were to do it — which quite often isn’t the case at all,” Ashdown notes. “We have frequently ended up redoing jobs that have been done quite poorly in the first place. But you do have to fight that perception that an internal service is going to be ‘jack of all trades, master of none.’”

The output of the Roland VersaUV LEF-20 is a great tool at the Print Studio’s disposal when it comes to showing print’s impressive capabilities rather than telling, and is the perfect addition for a team that loves to experiment.

“We’ve printed things like golf balls, hockey balls, awards — there have been some bizarre things,” he recounts. “It doesn’t mind what material is in there; you could just put most things in, and it will print straight onto it. It’s how we sell that to the customers that’s been our challenge. It’s difficult to say to people, ‘you can just take your phone and put it in there and print straight on the back.’ Or ‘you can pick a golf ball out of the weeds and put that in there.’

“It’s almost too much choice, they don’t know what to print on, so we found we had to do a little bit of work by creating a range of products,” Ashdown continues. “With signage, we’ve got door signage pre-cut to size and a template, and a similar system with the awards. Aside from those, anything goes, really. We’re constantly taking samples and putting them out there, whether it’s putting them up in the print studio, or putting them online and on social media. It has picked up traction over the last year, especially since we’ve put more of it online.”

Ashdown was thankful for his creative team when the pandemic hit in 2020 — creativity and adaptability were the name of the game as the usually bustling university fell victim to the eerie quiet of the COVID era. Growth areas for the in-plant include the commercial work from outside clients, which provides a strong additional revenue stream. Ashdown describes the adjustments to operations during the pandemic: “The amount of work has dropped right off, but the type of work we’re doing is still very similar, surprisingly, because we do quite a wide variety. We’ve done a lot of awards for one of our commercial clients, directly UV printing onto both sides of a Perspex [acrylic] block to create a 3D effect. 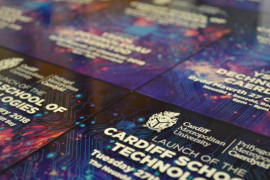 “We’ve also done a lot of clothing; we produce the Cardiff Met hoodies with a branded logo, which are available on our online shop, and we can’t post them fast enough,” he continues. “There’s been loads of those going through. Those are produced on our vinyl cutter, cutting out of T-shirt material then pressed directly onto the hoodies in-house. That’s been a success probably because the students aren’t overly feeling part of the university at times because they’re just sitting at home or sitting in their halls during lockdown, and it’s nice to get the branded clothing posted out [so they] feel like they’re part of Cardiff Met in some way.”

Alongside timely pivots such as COVID-related signage and antimicrobial films, the team have used their outside-the-box mentality to create some unique projects during the pandemic. A Scandinavian classic car restorer sends over boxes of car dials alongside a number of designs, enlisting the team’s help in restoring the fuel gauges, temperature gauges, and other items to their former glory through UV printing. They also worked on a delectable appreciation project in the form of chocolate bars with thank-you messages for individual staff working from home during COVID.

“We came up with a bar of chocolate in a personalized box,” Ashdown explains. “We recently bought a Graphtec F-mark die-cutter that does SRA3 [12.6×17.7˝], cutting any shape, so we had a little play around with it. They were large chocolate bars with custom printed boxes, which we printed all the inside of with a Christmas scene and a ‘thank you for your hard work over the last year’ message.

“I think we did about 150 of those for our library department, which led to lots of interest from others who liked the idea and had been looking for something similar to do for their teams as well. In the end, it grew to about 600 posted out across departments. It was a great project to work on.”

The ways the university and the Print Studio’s commercial clients use print will continue to develop and adapt. Ashdown and his team at Cardiff Met will surely keep meeting those challenges head on, pushing the boundaries of what their equipment can do, and delivering additional value through creative, exciting print applications their customers didn’t even know they needed.