Although a mailing that large doesn’t come about every year, Bauer explains that with the in-plant’s newest inserter — a Neopost DS-600i, installed in November 2018 — large jobs have become significantly more manageable. Take, for example, the Neopost’s first job after installation: a 300,000-piece mailing. 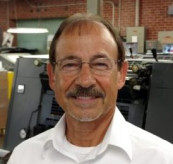 “We get a lot of big mailings,” Bauer says. “It’s unbelievable. We used to shudder when we had a couple hundred thousand to get out, but now, we don’t.”

Not only is the DS-600i faster than the department’s two Pitney Bowes DI-950 inserters, which have millions of pieces under their belts and are still in use, the DS-600i can handle larger envelopes. Bauer explains that Printing and Duplicating does approximately 30,000 large envelopes per year, which, prior to the DS-600i would have been hand stuffed.

“We’re going to cut down on the man hours to get the job done on larger envelopes,” he says. “The 9x12˝ envelopes that we used to have to hand-stuff, the [DS-600i] is going to do it. It’s definitely faster. It used to take a lot more students and a lot more press people and bindery people to hand-stuff the envelopes.”

Cutting down on man hours and time spent on a single project will end up saving money in the long run, Bauer explains, which will make the university very happy.

The Neopost DS-600i has also eliminated the need to hand-tab some brochures before inserting them.

“We put a 6x9˝ brochure with a letter in a 6½x9˝ envelope and it’s stapled on the 6˝ side,” he explains. “It’s an unusual piece. On the Pitney we had to hand-tab it to insert it. On the Neopost, you don’t, so it saves us time and money.”

Overall, the new device has only strengthened the department’s relationship with the university.

“I think it puts them at ease knowing that we keep up with technology,” Bauer admits. “They’re not supposed to worry about getting [a job] out. That’s our job, and I think when we upgrade the machinery and they bring in something for a thousand pieces that they want mailed out, they don’t want to worry that we will say ‘Hey, we can’t do this,’ or ‘This is not going to go out for another two weeks.’”

In addition to the Neopost DS-600i, the in-plant also recently added a seven-color HP Indigo 7900 with an in-line C.P. Bourg booklet maker, a 64˝ HP Latex 560 and a Graphtec 64˝ plotter. Though it was long an offset operation, the in-plant has finally gone all digital.

“It’s just hard to find people to run offset presses,” Bauer explains. This was a major change for Service Enterprises, but one that was ultimately necessary.

“I’m old school,” Bauer admits. “I’ve been in printing since 1972, so this is a big adjustment for everybody on my staff, but I think new machinery and new technology is good for morale. It’s more efficient. … We were withering on the vine, I think, if we didn’t [transition].”

Ashley Roberts is the Senior Production Editor of the Printing & Packaging Group.

A Bindery Bonanza at SIU