It’s Been a Year

Precisely one year ago today the country finally woke up to reality of the coronavirus. This was the day the NBA canceled its playing season, and Tom Hanks announced he had tested positive. New York City Mayor Bill de Blasio declared a state of emergency and ordered all Broadway theaters to go dark. Also, the stock market crashed. Bad news flooded in from around the world, a sudden deluge of impending horror that smacked us all wide awake.

I was working from home that day, a rare treat. (The treat that keeps on giving these days.) I had tickets to fly to Kansas City in three days to oversee the In-Print 2020 Contest judging. IPMA President Mike Loyd called me to discuss whether we should proceed as planned with the judging, since some judges were concerned about making the trip to IPMA headquarters. I was hesitant too, but assured him I would be there. That was in the morning, and the news that day would just keep getting worse.

By the next morning, Friday the 13th, I had changed my tune. I remember my walk through Philadelphia on that overcast day – my last walk in the city without a mask – looking at other people, wondering if they were infected, a sense of dread churning in my stomach. My company informed us we would be working from home for the next two weeks … you know, until this all passed. How naïve we all were.

For a look back on where the in-plant industry was a year ago today, reread this story I wrote after checking in with several in-plant managers on March 12, 2020. 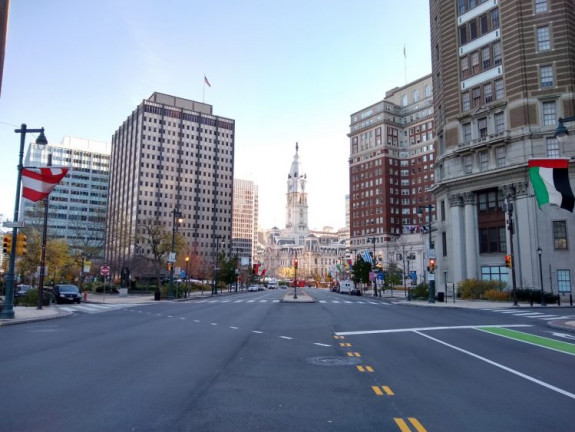 The empty streets of Philadelphia during the pandemic.