Laura Lockett: From Secretary to Director 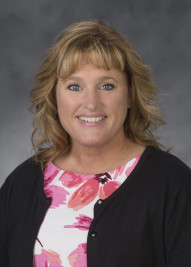 Laura Lockett is a Sacramento State success story. Starting as a secretary in the school’s in-plant 33 years ago, she has worked her way up to become director of the 12-employee operation. At the same time, she worked slowly toward her graphic design degree, taking two courses a semester for 22 years, until finally graduating in 2010. (Few can claim to have been a Sac State student as long.)

Born in Sacramento, California’s capital, Lockett did not have printing on her mind when she graduated from high school in 1983 and took a job at a medical billing company. Then serendipity intervened.

“My mom actually went to high school with the former director of Reprographics at Sacramento State,” she recalls. “They were at a class reunion and he said, ‘hey, we’re looking for a secretary,’ and my mom said, ‘I’ll send Laurie over.’”

And so began her in-plant career. Back in 1986, the in-plant had six full-timers and 15 student workers, and ran a couple of A.B. Dick and Mulitgraphics presses. Typesetting and layout were still done the traditional way: shooting negatives, stripping them and burning plates. With a lifelong penchant for art, Lockett was intrigued.

“I took an interest in what they were doing,” she says. During lulls in her secretary duties, she sat with the typesetting staff, watched them work and thought, “this is something I think I’d really love to do.”

Thanks to Sacramento State’s fee waiver program that allowed employees to take two classes a semester for free, she began taking design courses at night to broaden her knowledge. When a position opened for a graphic designer in 1989, she applied and got the job.

“I loved being a designer,” she declares.

Over the next decade, Lockett thrived in this role, continuing to take night classes in pursuit of a degree. She got married in 1991 to one of the shop’s student workers, and had a daughter, Allison, in 1993 and a son, Jacob, in 1995.

In 1998, the design department was moved into Public Affairs, and she went with it, leaving the in-plant behind. But not for long.

In 1999, the retirement of the mail manager prompted the university to put mail under the purview of the Reprographics director, Michael Kalstein. Recognizing he needed to spend time learning about mail, he decided to hire a print production supervisor to manage the printing area.

“I saw that as a good opportunity to come back and work on the print side,” Lockett says.

She interviewed and got the job. In this role she became the liaison between the designers and the print shop, and also served as the customer service rep, meeting with customers and coordinating all aspects of their print jobs.

In 2008, she played a major role in the decision to upgrade the in-plant’s digital color printing capabilities by adding an HP Indigo press.

Lockett is especially proud of one change she spearheaded at the in-plant.

“At the time we were not doing any printing for students at all,” she says.

One of her classes required her to design a magazine, and as she looked over the projects of past students, she was struck by how poor the print quality was. So she talked to a VP about using the in-plant to print projects like these to support student success. He agreed, and the shop began printing magazines, posters and portfolios for student course work. Today, the in-plant supports 10 different classes, which has greatly enhanced its value to the university.

In 2010, after 22 years of study, Lockett graduated from Sacramento State with a Graphic Design degree. The very next year she was promoted to assistant to the director and assumed responsibility for the mail center.

“I had a whole new learning curve,” she acknowledges.

Lockett moved her office into the mail center and immersed herself in the world of mail, working to streamline it and provide a higher level of customer service.

In 2012, the chair of the Graphic Design department approached her and asked if she would like to teach a course in print production.

“I had been in the program so long, all the faculty knew who I was,” she laughs.

She eagerly took the opportunity and taught for four years. She brought students in for tours of the in-plant and for visits to local commercial printers, and invited guest speakers from paper mills and other graphic arts firms to share their expertise with students.

When Kalstein retired in 2016, Lockett became interim director. She was officially appointed director in October 2017. Since then, she has brought a number of changes to the in-plant, starting with renaming it University Print and Mail. She implemented PrintShop Pro from edu Business Solutions, added a package tracking system, hired the in-plant’s first graphic designer in many years and brought in a slew of new equipment, including an addressing system, a bookletmaker, a coil punch, a creaser and a new Konica Minolta AccurioPress C6100.

Lockett started attending the Association of College and University Printers (ACUP) conference in 2004 and has grown to love the opportunity to network with other managers around the country. The advice she’s picked up at ACUP has influenced some of her purchasing decisions.

As a manager, Lockett strives to keep her staff motivated through cross-training and professional development opportunities.

“I think it speaks a lot to people when you are willing to invest money in them,” she says.

She holds quarterly meetings with her staff to discuss their goals and learn how she can support them. She’s also fond of rewarding them by baking cakes to celebrate their birthdays.

“They’re all amazing at what they do, and everybody is really invested in the changes that we’re making,” she praises.

Outside of work, Lockett and her husband Matthew, whom she married in 2008, love to travel to tropical places and have been to Hawaii seven times. She also enjoys spending time with her two grandchildren and hosts a family dinner every Thursday.

“Family is huge for me,” she says.

As for her job, she has no regrets about where it has led her.

“I love what I do,” she exclaims. “I learn new things every day, and I work with great people.”