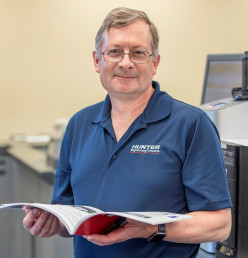 For Mike Barnes, the journey to becoming Print and Mail manager at the Hunter Engineering Co. in Bridgeton, Missouri, began many years ago and many hundreds of miles away, with plenty of twists and turns along the road. Born in picturesque Dorset, a coastal county in the southwest of England, Barnes moved around frequently as a child on account of his father’s job in the Royal Air Force. Eventually, the family settled in Wisbech, Cambridgeshire.

After completing his studies at 17, Barnes was left wondering what to do next. A “trainee printer wanted” ad found by his mother in the local paper marked the first step on his graphic arts journey.

“This was back in 1985,” says Barnes, “for a local company called Balding and Mansell. I was there for five years, and back then they sent you on a full training course. I did two years at Cambridge, studying graphic arts, graphic design, and printing. Those were the days. I was getting a salary and getting paid to go to college.”

Barnes continued to work at Balding and Mansell for another two years after finishing his college studies, a time he describes as “the beginning of the decline of the printing industry,” meaning work was dwindling in his department. Was he interested in transferring to a sales role, they asked? Barnes accepted.

He left the company and found another job locally, where he stayed for the next three years. But he still didn’t know what he wanted to do with his life. With a passion for travel, he didn’t stay still for long. He took jobs here and there in the printing industry before quitting to drive around Europe, or spend a few months in the U.S. And then something happened that would change everything.

“I met a girl in an online forum,” he says. “We spent a year talking online, and eventually I came over here [to the U.S.] in 1999 to see what she was really like. We’re just about to celebrate our 23rd wedding anniversary.”

Barnes describes his move to the U.S. as a “new start.” Without a Green Card, he couldn’t work, so he started out as a stay-at-home parent to his young stepdaughter, before eventually landing a role at a billboard printing company following a family move from Arkansas to St. Louis.

“I moved on to roles at a couple of mom and pop print businesses,” he says. “At the last one, the owner sold the company to start a business selling online movies and asked me if I’d go with him. I spent a year there doing IT and web development until the company sadly failed. But that’s when I saw the role at Hunter [Engineering]. I’ve now been here 11 years.”

Barnes’ print experience, as well as his life experience, had laid the groundwork perfectly for the job at Hunter Engineering, a manufacturer of automotive service equipment. He started working at the in-plant in March 2011.

“I had worked in every department over the years,” explains Barnes. “I did typesetting, I did graphic design, ran the presses, did the finishing. It was much the same when I got to the U.S. I did a bit of everything.”

He describes the in-plant as “tiny” when he first took up the role. The operation’s equipment consisted of one color printer and one monochrome printer. The output was mainly focused on supplying brochures to the sales reps, and even the bulk of that work was outsourced.

Implementing change, particularly when price tags are attached, is no easy feat, but Barnes knew there were cost savings to be had. Luckily, with a supportive company owner combined with some solid calculations, Barnes made a compelling case, starting with identifying inefficiencies.

“Because our product changes so quickly, we would buy 5,000 to 10,000 brochures at a time, and we may have only used 1,000 of them when the equipment changes, so we would have to discard them and order another batch,” says Barnes. “Same went for operations manuals. I worked out how much outsourcing was costing, got some quotes on some additional equipment, and I just went to him and said ‘if we got this machine we could cut these costs by about 50%.’”

The approach was successful, leading to a second color printer and an upgraded black-and-white model. Gradually, the work began coming in-house. No more obsolete brochures as portfolio changes are made; everything is now printed on demand.

“We have maybe 25 brochures on each shelf, so if the equipment changes that’s 25 discarded rather than 4,000,” he says.

Barnes estimates that pre-pandemic, close to half a million brochures were printed per year; that’s now down to about 250,000. The full-color brochures are printed and finished in-line on a Canon imagePRESS C10000, as are operations and installation manuals for all equipment.

“For every piece of equipment that goes out the door, we print something to go with it, and we’re printing about three quarters of a million pages of documentation per month,” says Barnes.

On top of that, the in-plant is printing direct mail. This was produced in moderate numbers when Barnes came on board, and has expanded under his leadership.

“Each week our sales reps pick between 15 and 30 mail pieces they want to send to customers or prospects,” Barnes explains. “Weekly we send out about 12,000 direct or targeted mail pieces.”
Barnes’ mission to expand the scope of the department has continued, the most recent addition being a Mimaki CJV150-130 wide-format printer/cutter.

“About five years ago, I noticed that we were printing a lot of large-format products outside,” he says. “Sometimes three or four times a week we have customer visits and we will decorate rooms with their logo. We were outsourcing all the large magnetic boards — we’re talking 40ʺ wide, spending $700 per visit. I did some math, went to the boss and said, ‘if you give me the additional space and $30,000 to buy this printer, laminator, and cutter, I can save you this much money. He looked at the numbers, and I got the room and the equipment. And the ROI on that was actually two and a half months. It saved that much money.”

The in-plant’s wide-format work has been on the rise since these investments, to the point where the department has been instructed to bring on another wide-format printer. It has brought opportunities that even Barnes’ meticulous math hadn’t accounted for, as he recounts: “We print a lot of decals, because all our equipment comes with decals. So the short-run decals, where they only need 20 or 30 a year, are all printed, laminated, and cut here. I have to admit that when I did the proposal for the large-format, I hadn’t even considered the decals, until somebody asked, ‘can you make these decals?’ I said, ‘of course we can.’”

Since he joined Hunter, Barnes has doubled his team and now has four employees. How would he describe his managerial style? “I just do it,” he says, casually. “I’m not shut away in an office; we’ve all got our desks within close proximity of each other. I like them all, and I hope they like me. They do seem to. We just communicate and act as a team.”

When hiring, he says he has yet to employ anyone with prior experience in print.

“I start with hiring temps, bring them in and see if they are a good fit, then train them up,” explains Barnes. “Some don’t work out as you’d expect, but the ones that I’ve got did very well over the three months’ trial and have stayed with us.”

Barnes is looking at adding additional members to the team in the near future. He hints that expansion will go quite a bit further than the upcoming second wide-format printer. On the other side of the coin, some items are being reduced, such as installation and operation manuals, which have adapted as technology has evolved.

“They’re not as necessary because all our equipment comes with a smart screen, and you just push the help button for videos and instructions built into the machine,” he explains.

Despite being settled in life and his career, Barnes’ passion for travel has never subsided, now with his wife Stefanie as a companion on those journeys. The pandemic has unsurprisingly put the brakes on their usual plans, but a trip back home to the U.K. is coming up soon, he says.

“Other than that, I’m pretty outdoorsy. I do a lot of hiking. I love the wilderness and getting out on my own in the middle of nowhere. In this country, you can do that. I can hike 20 miles and never see another person, which is wonderful,” he enthuses.

Barnes combines a love of hiking with a keen interest in photography.

“In the last two years I’ve hiked across the Grand Canyon rim to rim, hauling some big old film cameras with me,” he says.

Barnes plans to remain in his role until he retires — but that’s not to say the unpredictable adventures of his life are over.

“I’m still trying to figure out what I want to do,” he admits. “At the beginning of my life I was changing jobs, travelling, and I’m still working that path out. So I don’t know where I’m going to go when I’m retired. I just know I’m not going to stay in one place.”