Over the next several years, the city of Lansing, Mich., will offer an excellent vantage point onto the progress that inkjet is making among in-plants, especially those serving the public sector. This is because the state capital is home to Michigan’s Print and Mail Management (PMM) division, a high-volume operation that’s counting on inkjet to bring new efficiencies and cost savings to the network of state agencies it supports. 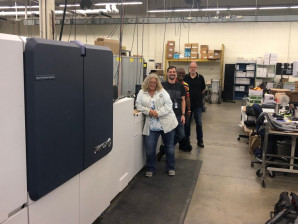 Measuring the benefits will take some time, as the production inkjet presses the in-plant has implemented — a Ricoh Pro VC40000 continuous-feed printer and a cut-sheet Xerox Brenva HD — have only recently gone into full production. But PMM Director Kristen Hampton thinks that over the next five years, inkjet could account for close to 75% of everything the in-plant prints.

That encompasses a cascade of work on both the print and the mail sides. In the state’s 2018 fiscal year, PMM (part of the state’s Department of Technology, Management & Budget) printed an average of 11 million images per month for an annual total of 130 million transactional, digital, and offset images, says Hampton. The in-plant also processed 56.7 million pieces of mail that year, averaging 4.8 million pieces per month — except in January, when the distribution of state tax materials causes the monthly output roughly to double.

Hampton estimates that 80% of what’s printed digitally contains variable data for transactional purposes. A major customer for this type of work is the state’s Department of Health and Human Services, which sends daily batches of correspondence for its county offices to PMM for overnight printing and mailing. Transactional work also includes vehicular titles, registrations, tags, unemployment checks, and other items that PMM produces under service level agreements (SLAs) for the agencies requesting them.

Color is, or can be, an element of all of these documents, and being better equipped to furnish that color economically was the main driver of PMM’s decision to acquire inkjet presses. 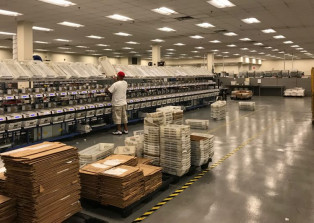 The long-term goal, says Hampton, is to become an all-digital white paper factory that can build color into whatever it prints “at no or low additional cost to the agencies.” This will involve weaning customers away from preprinted forms and moving all transactional work into a white-paper workflow on inkjet equipment. The shop also wants to retire a small-format, five-color offset press that, along with PMM’s digital devices, produces non-transactional jobs, such as business cards, brochures, books, and flyers.

Hampton says that the Ricoh Pro VC40000 and the Xerox Brenva emerged as the winners in a selection process in which competing vendors were asked to supply a proof of concept based on the types of work the in-plant commonly produces. Provided with specs and samples, the OEMs had to demonstrate how satisfactorily their inkjet equipment could reproduce the jobs on the same stocks the in-plant routinely uses.

‘Best Value for the State’

With color and print economy as the yardsticks of what Hampton calls “the best value for the state,” it soon became clear that the Ricoh and Xerox inkjet presses led the field. Hampton describes their print color quality as excellent: not completely equal to offset, “but really not that far behind.” She says both have performed well on untreated and inkjet-treated papers, adding that the presses also are demonstrating why inkjet’s reduced cost per impression “makes it a no-brainer” for shops that want to save money.

PMM staff gather outside their facility in Lansing, Mich.

Corresponding investments in finishing systems extend the capabilities of the inkjet devices: for the Ricoh Pro VC40000, pre-and post-processing equipment from Tecnau enables roll-to-cut production; and an inline booklet maker and dual-mode sheet feeder, both from C.P. Bourg, augment the Xerox Brenva. In these configurations, the VC40000 replaces a Ricoh InfoPrint 4100 twin printing system, while the Brenva takes over for three Xerox Nuvera 288s, a two-color Shinohara offset press, and two Xerox Nuvera 314s.

With the addition of four new Xerox Nuvera 314s, however, and with a Xerox iGen 150 and a pair of Ricoh InfoPrint 4100 engines still on the floor, PMM retains considerable toner firepower. Two of the Nuvera 314s, Hampton explains, will support transactional work; the other two will be for on-demand orders coming into the shop through EFI’s Digital StoreFront Web-to-print software.

Raising the Game in Wide-Format

PMM’s embrace of inkjet isn’t limited to page and document printing. The shop, says Hampton, has operated a wide-format inkjet printer for 10 years, using it mostly for posters mounted to foam core after imaging.

Succeeding that legacy device is a new Konica Minolta AccurioWide 160 hybrid UV LED wide-format printer, supported by a Colex flatbed cutter — a combination that will let the shop print directly to substrates up to 1⁄₄˝ thick. Hampton estimates that eliminating mounting and laminating will cut labor costs for poster making in half. 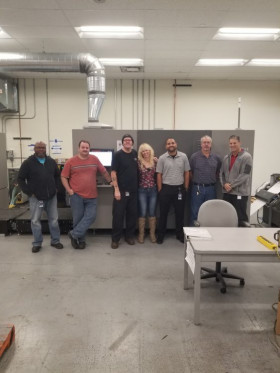 All of these resources are housed in a 95,000-sq.-ft. plant where 63 people fulfill the state’s printing and mailing requirements on an annual budget of $20 million. Created in 2016, PMM consolidates print and mail shops that various state agencies had been operating independently since the 1960s. PMM now serves 19 such customers and is the state’s only in-plant apart from one maintained by its unemployment insurance agency.

Part of PMM’s charter is managing print outsourcing, which it does to the tune of about $3 million worth of externally purchased work per year.

“Anything over $750 has to be processed through my office,” says Hampton, whose duties include administering the state’s prequalified print vendor program. The 46 print service providers currently on the list bid competitively and must be recertified for participation annually.

As a state printing office, the in-plant can’t insource work from private-sector customers, but it can offer printing and mailing assistance to county and municipal governments, universities, school districts, and other entities that receive state funding. Hampton adds that when the Konica Minolta AccurioWide 160 is fully up and running, the shop should be able to recover certain types of large-format work, such as weather-resistant signage, that it previously had to send out.

All in all, PMM’s relationship with its state overseers appears to be on dependably solid ground. Hampton, who has been associated with the state’s printing operations since joining as a typesetter more than 24 years ago, can’t recall any serious attempts to privatize the in-plant or place it under facilities management supervision. But, that doesn’t mean she has grown complacent in her present job, which she has held since PMM was formed in 2016.

“We’re constantly scrutinized and compared to the outside,” Hampton says, noting that the in-plant owes its ongoing status both to the fair prices it charges and to the value-adding services it provides — services that outside providers would not find easy to replicate. 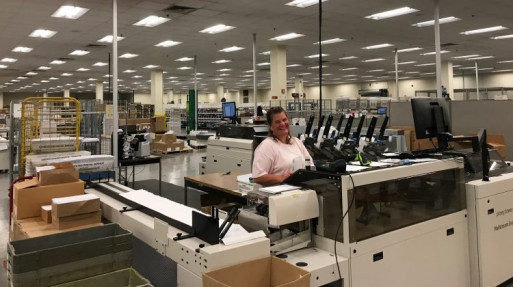 Security, for example, is a major consideration, with tax information, HIPAA-protected medical records, and other sensitive data making up much of the shop’s print and mail workloads. PMM provides safeguards by encrypting the data on secure servers behind the state’s firewall and by ensuring that employees are trained annually in data security.

Across the Hall, Into the Mail

Another strong selling point for the in-plant, according to Hampton, is “our print-to-post platform in one centralized location,” which eliminates duplication of effort while it increases customer convenience and satisfaction. Co-locating the functions enables the in-plant to get the printing done overnight “and then walk it across the hall to the mailroom” for quick entry into the mailstream.

Hampton says that because “we are so engrossed into inkjet” right now, the in-plant will concentrate on getting ready for the influx of work it expects to receive once word of the new process reaches customers. Inkjet thus becomes one more way to keep them convinced that the in-plant supports their mission and that using its resources makes good sense.

No matter what the assignment, notes Hampton, “we provide good customer service, and in the end, that’s the relevance to them.”