Karen Meyers’ in-plant is a mess.

“It’s like a war zone,” says the business manager of Michigan Farm Bureau Centralized Print and Mail Services. “We have stock everywhere.”

But it’s all for a good cause. The Lansing, Michigan, in-plant is preparing to move into a new 4,500-sq.-ft. facility that will not only be 1,500 sq. ft. larger, but will boast a much better layout.

“I’ve been able to design the whole thing,” Meyers says.

Among other improvements, the new shop will feature an outside entrance for external customers, whose work makes up 22% of the shop’s business, she says.

“For them to have direct access to us will be key,” she enthuses.

Despite knowing a larger facility is on the horizon, Meyers decided not to delay making a major purchase, something she’s had her eye on since seeing it at the 2019 PRINTING United Expo: a Colex Sharpcut SX1717 flatbed cutter with a 5.5x5.5' bed. The in-plant installed the cutter in July, and it hit the ground running.

“The second day we were training, we were cutting live jobs,” she remarks.

Though the in-plant was already “space constrained,” Meyers says, it was also experiencing workflow delays that she knew the cutter could alleviate – even if there was barely enough room for it in the current shop.

“Whenever we were doing some specialty substrates, I would have to order it all trimmed down to size,” she says. Those pieces were printed on the shop’s 64" HP Scitex FB550 hybrid flatbed printer, but great pains had to be taken to avoid leaving a white edge.

“It left no room for any error,” Meyers says. 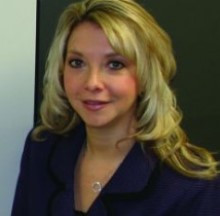 Delivery of those pre-cut substrates could take up to three weeks, she adds. What’s more, trimming vinyl banners by hand was a laborious process that often required two people. Since installing the Colex, that has changed dramatically.

“In the first … three weeks, we saved about 13 hours just on trimming out some banners,” she reveals. “The cuts are cleaner, more precise. There’s no risk of injury either.”

In addition to streamlining the in-plant’s workflow, the Colex is bringing in new work the shop couldn’t have done previously, like a recent run of seven diecut ice cream cones for the Kent County Youth Fair. Meyers foresees more such jobs, since she has long been in charge of procuring die­cutting work.

“Now we’ll able to do that in-house,” she says. She estimates the cutter will bring in about $35,000 in new business annually.

Centralized Print and Mail Services has had its HP Scitex FB550 printer for about four years, Meyers says, and demand for wide-format has steadily increased.

“Our wide-format business doubled the months of June, July, and August over typical,” she notes.

She hopes it gets even busier as the Colex cutter enables new types of projects. One of her ideas is to print and cut short runs of personalized promotional items, like coasters and magnets, for Michigan Farm Bureau agents. Those items are currently ordered in large volumes, with no personalization.

Meyers plans to show off the possibilities at Michigan Farm Bureau’s upcoming Agent Business Seminar, where the in-plant will have a booth. She also intends to hold an open house in the spring, after getting settled in the new facility.

VDP for In-plants: Variations on a Theme

Get in the Game: Printing Opportunities from Secondary Schools