Better working space, expanded production capabilities, and more ways to serve the parent organization — every in-plant seeks these advantages. Some have the good fortune of achieving them almost simultaneously. A case in point is Shelter Insurance Document Services in Columbia, Mo., where everything appears to be coming together in a way that would make the personnel of any corporate print shop smile. The in-plant will be 75 years old next year, and its mission remains largely unchanged throughout that time. “Our main thrust is supplying our insurance agents with all the tools, documents, and resources they might need,” says Ben Fowler, Document Services supervisor. That entails printing for a network of 1,400 licensed agents who sell home, life, auto, farm, and business insurance in 21 states. The in-plant also serves the four other insurance companies that the Shelter group comprises.

“We do all of our printing for everyone,” affirms Kelli Embry, Print & Graphics supervisor, who manages the in-plant’s seven-member production team and an equal number of graphic artists. Document Services employs a total of 33 people, including management and a group of document specialists in supporting roles. The manager of Document Services is Gary Cass.

Very little is outsourced; nearly all of the marketing materials that Shelter agents use come from the in-plant. A separate Mailing Services department — which handles all of Shelter’s mailing — distributes policy documents. These packets may include policyholder guides and similar materials printed by the in-plant.

Fowler says that by equipping itself to produce whatever the parent organization requires of it, Document Services has succeeded in recapturing nearly everything that used to be sent out. “We’ve got the confidence of our marketing department, and that’s been huge for us,” he observes. 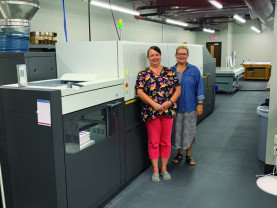 As busy as it is, the in-plant also finds time to insource print jobs from charitable, non-profit, and community organizations. The shop produces “revenue work”— things like invitations, envelopes, and business cards — at competitive prices for external customers. “We always have it coming through,” Fowler says, although he notes that the non-Shelter work seldom accounts for more than a small percentage of the overall volume.

The in-plant now has more productive quarters for its offset, digital, and wide-format equipment in the new facility it moved into on June 15. At 5,000 sq. ft., the facility is 56% larger than the 3,200-sq.-ft. shop the in-plant left behind, and the environment it provides is superior.

“We are now all in one area, which helps better communication and workflow,” Embry explains. The amenities include energy-efficient LED lighting and a heavy rubberized floor that dampens noise and makes it easier for people to stay on their feet for extended periods.

The distance traveled between the former space in one Shelter building to the new location in another was “shorter than a football field,” Embry says. Everything was fully up and running at the new site in less than seven business days.The change of quarters didn’t impact productivity. “We notified all the departments that we would be down for that week,” Embry says. “We didn’t have to send anything out. It was pretty seamless, actually.”

Company-wide precautions against COVID-19 haven’t impaired operations either, according to Embry. Although the in-plant operated on staggered shifts for several weeks leading up to the move, its production personnel are now back in the shop in full force. The graphic designers continue to work productively from home, Embry says.

With a pair of offset presses to relocate — a four-color, 14x20˝ Shinohara 52 perfector, and a two-color, A3-format Hamada B-252 — the usual delays for rigging and hauling might have been anticipated. But the press movers eliminated that potential holdup with a solution that Embry says left her “amazed.”

“They brought in a piece of equipment that fits underneath the press,” she recounts (a remote-controlled transport device). This form of transportation made breaking down the Shinohara into separate printing units unnecessary. “Once they got it up in the air, they had a joystick, and they drove it around like a little car and worked it through all the nooks and crannies until it got to the dock. It was pretty impressive, the way they moved it around with that robotic piece underneath it.” 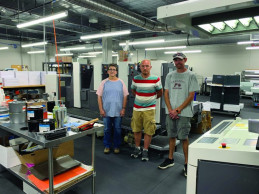 The newly housed offset equipment will continue to produce booklets, brochures, and other items for policyholder packets, but the Shelter in-plant’s reliance on digital print is also strong. A Kodak NexPress SX3300, installed about six years ago, provides newsletters, flyers, postcards, business cards, magnetic prints, door hangers, direct mail, and, with the help of its long sheet feeder, posters and signage. Up to 40% of this output, mainly postcards, is variably printed with the agents’ photos and contact information. Like an increasing number of in-plants, Document Services has made wide-format printing a star among the services it offers its customers. The shop’s wide-format workhorse is a Canon Arizona 365 GT, a UV flatbed device with a print area of 49.6x98.8˝ and print speeds up to 377 sq. ft. per hour. Embry says its range of printable materials includes Coroplast, metal, wood, glass, magnetic media, and canvas. Banners, yard signs, decals, and even drink coasters are among the items it enables the shop to turn out.

Wide-format is popular with the in-plant’s clientele. “We’re getting more and more every day,” Embry says, reckoning that it accounts for about 30% of overall volume. She expects wide-format printing to be in even greater demand once the shop complements it with a capability it hasn’t had until now: high-end cutting. This will come in the form of a soon-to-be-installed Colex Sharpcut dynamic cutting system. Embry says the device will give the in-plant “greater magnitude to cut out shapes, to do more on the substrates that we currently use, and also to experiment with new ones.” 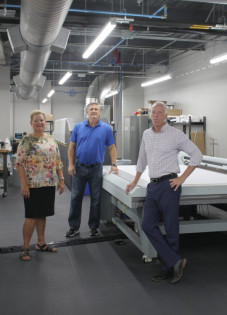 Using the Sharpcut to finish output from the Arizona will open the door to producing point-of-sale materials and boxes. Also possible, says Embry are yard signs, vehicle decals, and window clings cut in shapes beyond simple squares and rectangles.

“We had been talking about getting a Colex cutter for some time,” Fowler adds. “Our marketing department is incredibly excited about the possibilities and the options they’re going to have once we get it delivered and installed.”

An inkjet press could also be in the picture for Document Services, possibly as a replacement for the toner press and/or the Shinohara. “We are looking into that pretty seriously now, to increase our productivity and be more cost effective,” Embry says, adding that a decision on acquiring one could come within the next 12 to 18 months.

These evolving operations will be coordinated with the help of an Avanti print MIS that Document Services has relied on since 2013. “Before that, we basically had a glorified Excel spreadsheet, and that was it,” Fowler says. “It was a little tough for some of our employees making that transition, but I think it’s been a huge improvement in managing the work coming through, and pulling our people together in working more as a team.” 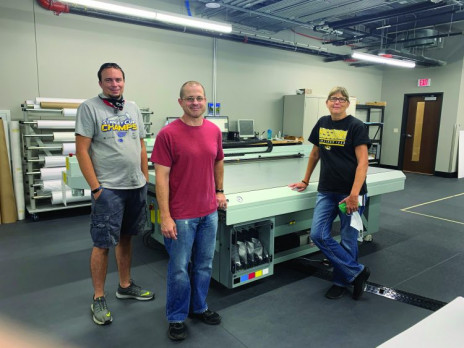 The MIS — which Fowler and Embry want to upgrade to Avanti’s Slingshot platform — also increases the shop’s transparency to management. “We do monthly reports, and as soon as we got Avanti, we were able to more quickly and more accurately report what we were doing, and what our experience was,” Fowler says. Embry adds that another ambition on the data management side is to set up a Web-to-print portal that will let agents spec and proof their printed items online, replacing an older, less efficient ordering system.

Both supervisors are optimistic about what Document Services will be able to do for Shelter Insurance going forward, even in the face of an ongoing pandemic. “Our business is actually doing really well. I think we’re growing it,” says Embry, repeating her high hopes for more volume once the Colex cutter is installed.Their confidence rests on the knowledge that the in-plant’s role is seen as relevant and valuable by the parent organization. “Upper management is supportive of our operation,” Fowler observes. “We don’t have the concerns that others do of being bought out, or gotten rid of.”

“I think they listen to us,” he says.