Sticking with offset in the digital printing age was a big decision for Texas Health and Human Services (HHS) Printing Services, and Director Paul Kida did not make it lightly. Before going out to bid, he visited Houston Independent School District’s in-plant to see its Canon varioPrint i300 cut-sheet inkjet press in action.

“We looked at it for quite a while,” he says.

Kida was impressed with the device and recognized how much easier an inkjet press is for less experienced operators to run. In the end, though, his shop’s high-volume requirements and need for a larger sheet size – along with the fact that none of his six press operators are ready to retire – pulled him back toward offset.

“Really, a traditional offset press just seems to be a much better fit for our operation,” he explains, “with the larger sheet size, the faster run speed – there seems to be more flexibility with the types of papers we can run through it.”

The in-plant does very little variable data printing, Kida says – one of the key benefits of an inkjet press. On the other hand, offset quality is important to many of Printing Services’ customers, who use PMS colors and often design pieces with large solid areas.

“The product that we’re going to get off of this new press is going to be superior to what we could have gotten from an inkjet, as far as the quality,” Kida says. “I think we’re just getting more bang for our buck with an offset press, especially based on the type of work that we still run here.”

For 30 years the four-color, 29ʺ Heidelberg 72 press at Texas Health and Human Services (HHS) Printing Services did its job well, pumping out booklets, brochures, and other informational pieces for a variety of state agencies. But time took its toll on that workhorse press, and after three decades, Director Paul Kida was ready for a change.

“It was time to get some new technologies — some new efficiencies — in the shop,” he says.

Those efficiencies arrived in June when the 24-employee in-plant installed a new four-color RMGT 7 model 790 perfector press with a coating unit in its 37,900-sq.-ft. Austin, Texas, facility. The B2-size press features automatic plate changing, automatic blanket and ink roller cleaning, program inking to speed up color tone adjustment, a continuous dampening system, a printing density control system, and many other time-saving features not available on the old Heidelberg 72. The new press has also been fitted with LED UV drying lamps so jobs can be printed with UV inks, cured, and sent immediately to the bindery.

Kida is excited about the increased productivity the RMGT 790 will bring.

“The makeready is going to be a fraction … of what we had before,” he says. 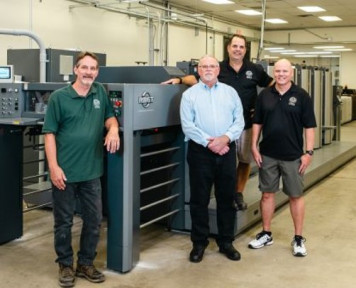 Running 16,000 sheets per hour, the new perfector press is also much faster than the old one. Kida anticipates monthly volumes of about 6.2 million 8.5x11ʺ impressions. This work will include brochures, booklets, posters, pocket folders, calendars, presentation materials, mailers, and more. Though the in-plant was once primarily a black-and-white forms printer, that has changed.

“More and more, a lot of our work is four-color process,” he says, estimating color comprises 40% of the shop’s volume. The in-plant prints a lot of informational pieces with photos that are designed to be eye catching, so offset quality is important, Kida says. Having coating capabilities on the new press is an attractive option for some customers, he adds, and will allow HHS Printing Services to do some work it previously couldn’t. 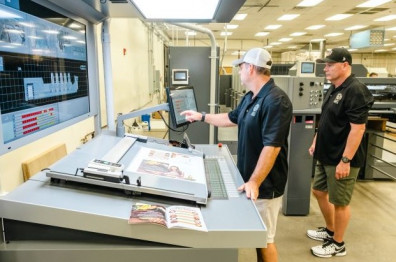 Before going out to bid for the press, Kida took a close look at inkjet technology, even touring an in-plant with an inkjet press, but ultimately decided his shop’s applications were better suited to offset. (See sidebar.) He visited the nearby Texas Department of Transportation in-plant to see its RMGT 7 and checked out an eight-color version at a local commercial printer. He liked what he saw.

“Both shops had nothing but good things to say,” he notes. 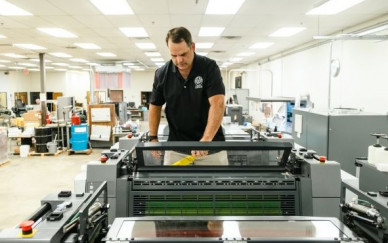 RMGT won the bid, and the press was delivered on June 6, about a month later than expected due to supply chain issues. Kida shrugs off the delay. 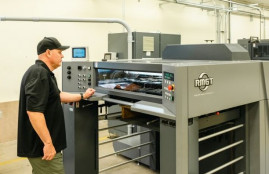 “I wouldn’t consider this to be much of a delay at all,” he says — especially compared to the slowdown he’s experiencing with paper and supply deliveries. “We’ve been pretty happy with the turnaround time.”

Installation and training were expected to take about 10 days. 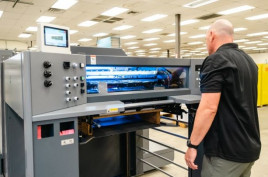 The in-plant also has a refurbished Halm envelope press, which it added a few years ago when Kida noticed a big uptick in envelope printing jobs. That press paid for itself in just six months, he says. The demand for envelopes has continued, but unfortunately the supply chain can’t provide them quickly enough. Kida says he has orders for two million envelopes on standby.

“We’re just waiting for envelopes to come in,” he says.

A Beacon in the Storm