In the marketing world, calling a new product a "game-changer" or "revolutionary" tends to be overused. But HP believes the official launch of the 22˝-wide PageWide Advantage 2200 inkjet web press will change the landscape of the high-speed production inkjet printing market for commercial printing, direct mail, and publishing-related printed products, such as books.

The new PageWide Advantage 2200 press platform, which will be the first in an eventual series of offerings, incorporates a very compact footprint, a modular and expandable design that enables from one to three high-efficiency dryer (HED) configurations based on product applications, speeds up to 500 fpm for full-color or 800 fpm monochrome, and media versatility to print up to 300 gsm/14-pt. substrates at high run speeds. Its smaller size and modular component architecture also allows the new press to be installed and up and running in a customer site in as little as one week.

The quick installation and setup time is one key reason why HP PageWide Industrial will be operating a PageWide Advantage 2200 press as a main attraction and show-stopper within HP's 21,000-sq.-ft. booth (C4256) during the PRINTING United Expo, held Oct. 19-21, in Las Vegas.

"We are just crazy excited that this day has come," Barbara McManus, director of R&D for HP PageWide Industrial, proclaimed to a small group of industry analysts and media early last week during a non-disclosure, pre-launch briefing at HP's massive Corvallis, Oregon, R&D, testing, and manufacturing facility. 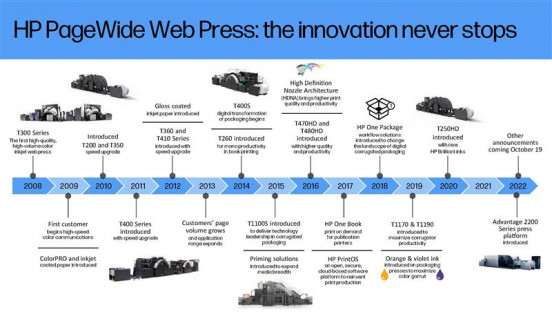 The fact that HP industrial presses have been on customers' floors for more than 13 years has enabled McManus and her R&D team to get feedback on what press components and attributes work well, as well as where HP PageWide Industrial needed to refocus its R&D efforts. This has played a key role in the development of the new press platform.

For example, the new Advantage 2200 incorporates the same robust print bars as the T400 press and uses HP's Brilliant inks. But — to reach new markets and capture more pages — several new HP innovations have also been incorporated. Visually noticeable are a compact design and footprint, a dual paper path that travels through one print arch, easy operator access to the paper web and the print bars, an operator-friendly interface, and an overall reduction in the number of parts (some of which are produced via 3D printing) to maximize press uptimes through increased reliability and less operator interventions. 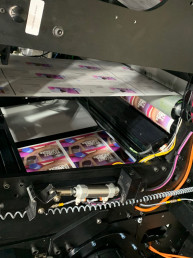 The Advantage 2200 is capable of speeds to 500 fpm for full-color production.

The HED dryer technology is also a key development. High volumes of air move and circulate at high velocity for mass transfer removal of moisture at maximum press speeds. "The paper is actually floating through the dryer, minimizing stress of the paper," she explained. "It will result in flatter sheets and less impact to the paper. We're also heating the air close to the web." As a result, and due to the fact that up to 80% of the air is recirculated, the cost of power consumption per page will be less using the HED dryers, reflecting HP's strong sustainability commitment.

"And then there's things you can't see when you look at the new press," McManus added. "We have some new electronics and we've minimized the number of boards, again helping the reliability, and we've added some new firmware and software."

Yale Goldis, director of strategy, commercial product and solutions, HP PageWide Industrial, noted that current HP PageWide customers and key prospects have been very impressed. "We've brought in some very knowledgeable customers to look at the new equipment and put it through its paces with [difficult] files we hadn't seen. They came in here to break the machine, honestly," he quipped. "They've been blown away ... Our customers will be able to offer more jobs and more flexibility for their clients, so they can take their businesses where they need to go." 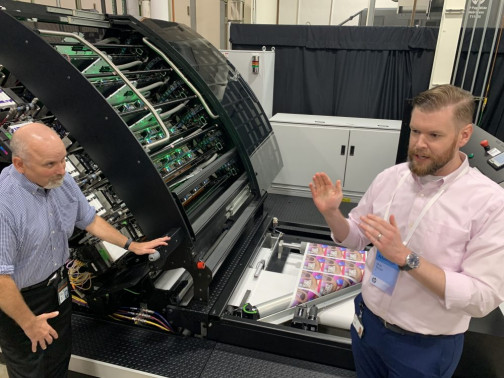 Product Category Manager Max Raver (right) demonstrates some of the features of the HP PageWide Advantage 2200.

Similar to the positive feedback from existing PageWide users, noted industry analyst Marco Boer — who also chairs the annual Inkjet Summit — was similarly impressed by the Advantage 2200 platform, from the view of an independent digital printing technology expert. "I'm not a promoter of HP, but I think all of us, probably including HP, are underestimating the amount of interest in this particular platform," Boer said.

"Because of the quality and the productivity, we're at a level where there's a sea change happening in the market," he added. "And it's aided, in part, because of the whole COVID supply-chain problem. So, that has been an accelerant where, all of a sudden, printers are saying, 'I've got to do something. I can't wait." And, now, this is the platform that gets them through that. So this, without sounding like a promoter of HP, is the beginning of that inflection point."

Vahaaj Khan, Americas sales manager, HP PageWide Industrial, shared similar enthusiasm for the strong interest he's already received from existing customers and prospects who are seriously considering how an Advantage 2200 could bolster their businesses. "This technology is going to provide them with that unique competitive edge that is going to be offered by no one else," Khan said, pointing to the Advantage 2200's high throughput and productivity, its ability to print on 14-pt. substrates, and HP PageWide's overall manufacturing philosophy that enables ongoing technology upgrades to be made to existing machines in the field. "Innovation is going to come through this platform for many years so, once they invest, they have such a long runway to keep adding more and more functionality. All of those are unique values that HP can bring to its clients."

Information was also provided about the first two pilot users of the new press platform. O'Neil Digital Solutions — the very first HP PageWide web press user in 2009, which has subsequently installed 13 PageWide presses — has now been operating a two-dryer-configuration press with HP's passive air cooling option for several months. In a video, Ann Gayou, senior VP of plant management at O'Neil, pointed to the ease in which O'Neil press operators were able to learn how to run the new press — despite the company being in the midst of its busy season when it first came online — and just how fast O'Neil was able to start outputting millions of live customer pages.

From a totally different perspective, Wheeling, Illinois-based SG360°, which was not an existing HP PageWide customer, installed a three-dryer Advantage 2200 press configuration with the active cooling option in just one week to output a mix of highly dynamic, largely high-coverage direct mail work. "Within weeks of this press being in operation, we have printed over 20 million images, and are absolutely excited for future possibilities using its terrific print quality," Kevin Hughes, SG360° COO, pointed out. The choice of SG360° as the second pilot user — where HP PageWide was coming in as a new vendor —  also demonstrated HP's confidence in the new press offering. 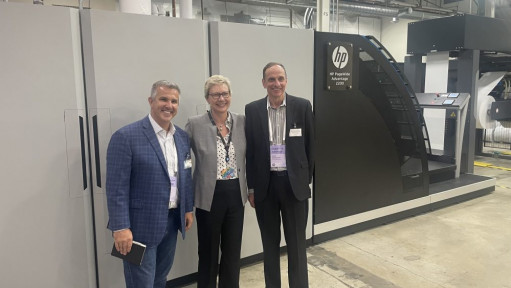 Annette Friskopp, global head and GM at HP PageWide, and her team remain highly enthused about how the new press platform will send waves throughout the industry. "This new PageWide Advantage platform is a game-changer for the commercial print industry,” she said. “HP has listened to our customers, and we realize ease of use and uptime are critical success factors. This new press offers configurations to enable customers to optimize the press for their quality, productivity, versatility, and economics to grow their digital production businesses.”

Based on the feedback from existing customers, key prospects, and industry experts so far, the Advantage press platform appears to be a winner that will help to alter the production inkjet printing market landscape in the years to come. If you're planning to attend the PRINTING United Expo — and perhaps even not a candidate for a high-speed web inkjet press — the new PageWide Advantage 2200 press should still be on your "must-see" list.