Though many in-plants have shut down their offset presses to concentrate on printing smaller runs on digital devices, the University of Nebraska, Lincoln (UNL) has gone in the opposite direction. Printing Services recently fired up a six-color, 40˝ Manroland 706 PLV HiPrint perfecter press with an aqueous coater. The press has been so busy since mid-August that the in-plant had to add four additional employees, bringing its staff count up to 49, with three additional new hires in the plans. 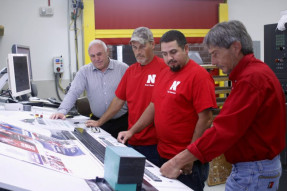 “We can’t keep up with it,” says John Yerger, director of Print, Copy, Merchandising, Mail & Distribution Services. “It’s doubling our capacity right off the bat.”

For example, he says, a recent 16-page, 40,000-impression job for Admissions that used to take the in-plant three days to print, “we did the job over on the 40˝, and we did it in a day and a half.”

The 11,000-pph pre-owned press spent its first 10 years printing calendars in Germany, Yerger says. It comes with Manroland’s P-com system to send ink setting information from prepress to the press, speeding up makeready time. The shop also added a LithoFlash system from Lithec, which measures and controls the densities of process inks by scanning color bars on every sheet and adjusting the press every sixth sheet. This, Yerger says, is lowering production costs and improving productivity.

The Manroland 706 PLV HiPrint replaces a pair of very old two-color presses: a 40˝ Miehle Roland and a 36˝ Miehle.

Yerger’s goal in adding the six-color press is to bring much of the long-run offset work that’s being done by outside printers back into the in-plant. Currently UNL outsources 12% of its offset volume, he says.

The fact that the new press has aqueous coating capabilities should help with that, he says, since a good quantity of aqueous-coated work is being outsourced by the in-plant’s top two customers: Athletics and Admissions.

Yerger is not blind to the trend toward digital printing.

“We looked at the inkjet presses,” he says, especially the Océ VarioPrint i300. “But the quality just wasn’t there.”

Also, the run lengths being demanded by Athletics and Admissions — averaging 20,000 impressions — are much better suited to offset, he contends. Those groups need large quantities of recruitment brochures, media guides and sports programs.

By reducing how much the university is spending on outside printing, Yerger expects to save UNL about $120,000 a year in print procurement costs plus another $75,000 in reduced production costs — numbers that will increase as the in-plant takes on additional work.

“We project to pay the press off within five years,” he says. 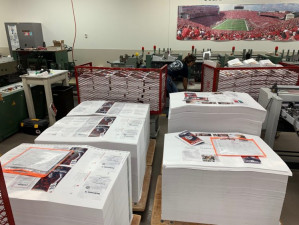 These digital machines along with the new Manroland 706 PLV HiPrint, an existing 29˝ Manroland and all the color printers in Printing Services’ three copy centers, are all calibrated according to G7 standards so their output matches. Yerger feels this is crucial for giving customers confidence their colors will always be consistent and accurate.

“That’s actually given us more business,” he contends.

To get the word out about the in-plant’s new offset capabilities, the shop has a salesperson who visits clients, as well as four customer service reps. The in-plant will hold an open house on Oct. 10 to demonstrate the press.

Attendees of the Association of College and University Printers conference (March 29-April 2, 2020) will have an opportunity to see the press for themselves. The conference will take place in Lincoln, Neb., and includes a tour of the in-plant.

Related story: From the Editor: Offset in the Inkjet Age

Offset: Good for Business — and Getting Better