The New York Police Department’s Printing Section may well be the safest in-plant in America. Tucked deep inside NYPD headquarters in lower Manhattan, a stone’s throw from the Brooklyn Bridge, the in-plant is not easy to access, with ID checks, metal detectors and more than a few armed officers on the premises to keep visitors in line. 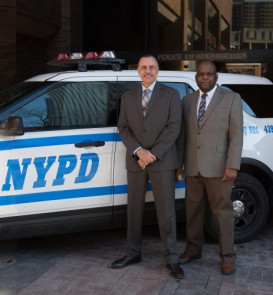 “We don’t have very many issues with safety here,” laughs Director Julio Rosado.

But despite his in-plant’s location in the middle of such a massive police presence, Rosado makes it clear that the NYPD Printing Section is a business with procedures in place, and police officers should not expect to wander through the operation whenever they want something.

His goal is to keep all of the shop’s customers happy with high-quality, quick-turnaround printing — especially customer No. 1, Police Commissioner James P. O’Neill.

During In-plant Impressions’ recent visit, the in-plant was printing the program for an executive conference being organized by O’Neill. The four-color booklet featured spot varnish laid down by one of the shop’s two new Xerox Color 1000 digital presses, one of which has a fifth print station for applying clear dry ink. 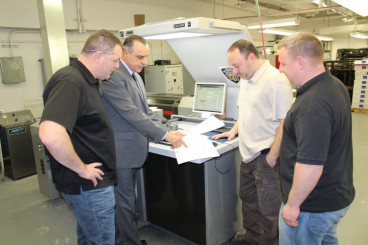 Those aren’t the only recent upgrades at the NYPD Printing Section, a unit of the Support Services Bureau. The shop has also added a Xerox D125 black-and-white printer, a 64˝ Epson SureColor S80600 wide-format printer and a four-color Mark Andy/Presstek 52DI direct imaging offset press to address the growing need for four-color printing.

“It increased our ability to get four-color work out by 50%,” remarks Rosado. “Considering how much work we do, that’s a big deal.” 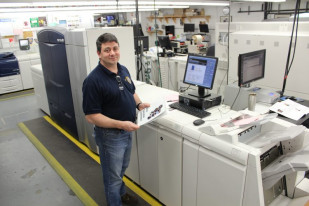 The new 52DI press replaced an aging two-color Man­roland press, and joined a pair of four-color Presstek 34DI presses, two Hamada presses, a one-color Heidelberg SORD, a Halm Jet envelope press and two Didde web presses that are used to satisfy the NYPD’s incessant need for forms. In addition, two previously purchased Heidelberg presses — a two-color 29˝ and a four-color 40˝ — are waiting to be hooked up to electricity in an NYPD facility in Brooklyn, which is expected to happen this summer. Once they go online, Rosado says, it will be a “game changer.”

He is confident there will be enough print work to keep all of these presses busy. In 2017, the Printing Section pumped out 111 million impressions; in 2018 that jumped to 169.5 million, and work is showing no sign of slowing down.

A Century of Service

Rosado took over as director two years ago after a long career in the New York City printing industry, including a stint at RR Donnelley’s financial printing operation.

“Back in the day, New York City was a big printing town,” he says.

The NYPD has had an in-plant for more than 100 years, Rosado says, though the current facility opened in 1974, when the police headquarters complex was completed. Staffed by 38 employees, the facility spans two floors and is packed with offset and digital presses, bindery equipment and a design and prepress area.

The need for fast, on-demand printing, both for NYPD business and for disseminating information to the community, makes it essential for the largest police force in the country to have its own in-plant, he says. Plus, there’s another important reason:

“We do a lot of secure pieces,” Rosado notes.

These items are not meant for the public, such as counterintelligence and anti-terrorism materials, emergency response instructions with sensitive information and images, and directories with personal information that must remain private. Sending materials like this to an outside printer is out of the question.

“Keeping it in-house means no one can disseminate the files,” Rosado stresses.

The shop also prints pieces with security features to prevent illegal copying, such as official NYPD parking permits. These use microtype, which looks like a solid line until viewed with a loupe; void pantograph patterns,  invisible to the eye but when copied, text appears stating it is invalid; and a gold foil stripe. The permits used to be embossed as well, and printed with invisible ink that could only be seen under a UV light, but eliminating those steps and switching to stock with a foil stripe saved about $20,000, Rosado says.

At times, the in-plant gets jobs that are so sensitive they require a police presence while they are being printed.

“They literally stand over the person doing the job and they wait for it,” Rosado says. “No one sees that job.” 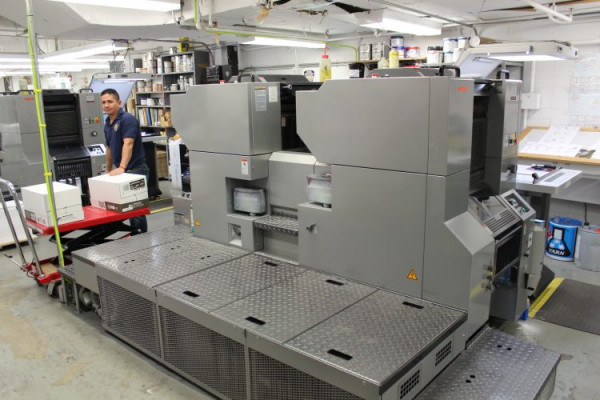 Walter Pazmino runs a job on one of the in-plant’s two Mark Andy/Presstek 34DI presses. 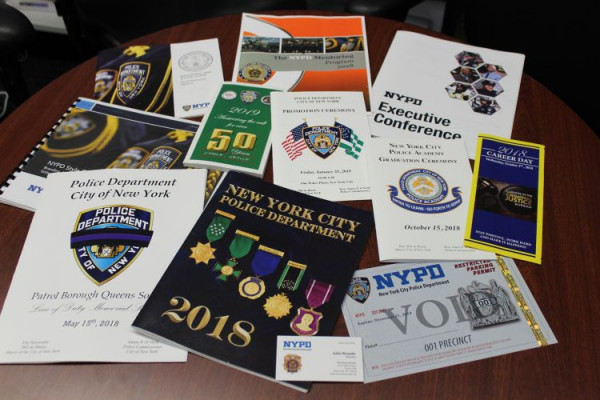 Samples of work printed by the NYPD Printing Section. 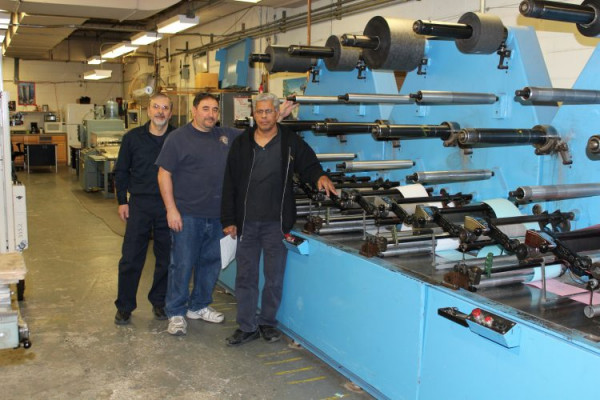 The NYPD Printing Section uses this web collator to assemble three-part carbon forms. Standing with it are (from left) Thomas Sacchetti, Carmelo Peluso and Chacko Varughese. 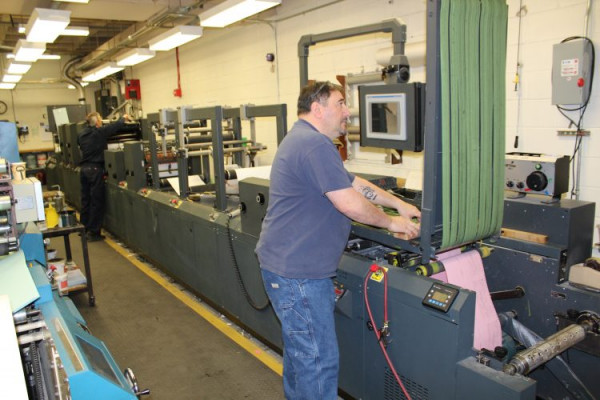 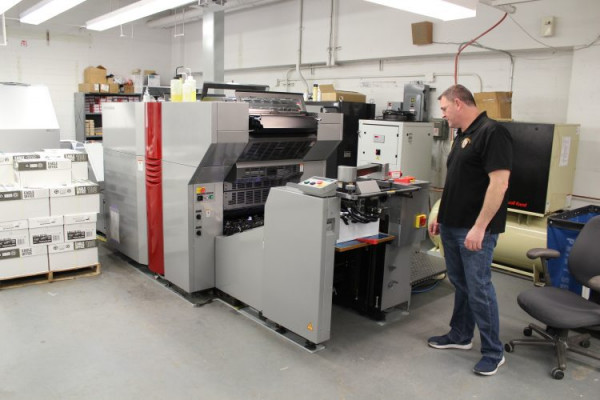 The Printing Section also prints some very complex jobs that would be more expensive to outsource, such as the activity logs that all officers must carry with them. These are both stitched and perfect bound, and have three holes drilled in them for use in a ring binder. They are also numbered for unique identification purposes. The in-plant produces 2,000 of these every week.

One of the biggest cost-saving victories for the in-plant was the printing of business cards for every single police officer, a total of 11 million cards. The job was bid outside, with an average bid of $6 million for the work. The Printing Section had to bid on it as well. It easily won the job.

This was not a simple job. Each card went through three presses and was trimmed multiple times. First, the backs of the business cards were printed on 22.5x35˝ sheets on a Heidelberg SORD. They were then cut down to 11x17˝ and run through the Presstek 32DI, which printed the static color information on the front of the card, including the NYPD logo. Then those sheets were cut down to 8.5x11˝ and loaded into the new Xerox D125, which the in-plant acquired specifically for this job, and each card was personalized. The shop finished all 11 million cards one week before the deadline, Rosado says.

Other important jobs produced by the Printing Section are the official NYPD calendar (“This is one of the pieces we do that everybody wants,” Rosado says.), full-color graduation books (“The [graduation] results don’t come in until the day before graduation,” he notes. “Everybody stays pretty late for that [job].”), training manuals, directories, precinct statistics, conference books, annual reports and lots of forms, such as for accident reports.

The in-plant uses variable data to personalize reports and conference materials. It prints posters and maps on its Epson SureColor S80600 wide-format printer for community events and memorial services — and also prints “crime-stopper posters” for display in neighborhoods where suspected criminals may be lurking. The shop supports the NYPD Neighborhood Policing program by printing flyers, booklets and other items (in various languages) to keep communities informed.

One thing that makes the NYPD Printing Section different from other in-plants, Rosado says, is the importance of the police hierarchy.

“Rank matters here — a lot,” he stresses. “There’s a level of respect that we have to work with.” Which could mean that a high-ranking official makes a demand that the in-plant must comply with. But that’s rare, Rosado says, adding that the civilian staff and police force work very well together.

Despite the strong security at NYPD headquarters, the in-plant does not have any problems getting its supplies delivered.

“They just to go through security,” Rosado remarks.

The next big change for the in-plant is the implementation of EFI PrintSmith Vision to replace the shop’s proprietary MIS. This will greatly enhance Rosado’s ability to create reports. Despite being a no-chargeback operation, he still feels it’s essential to report the in-plant’s savings to his supervisors.

“Even though we work off a budget, it doesn’t mean that I don’t want to show my boss that we’re working efficiently,” he says.

With the new production equipment now up and running, Rosado feels pretty good about the in-plant’s ability to meet the NYPD’s document demands. The 52DI press has brought some much-needed speed to the operation.

“The direct imaging from prepress straight to press is not only a time-saver, but it makes the makeready so much shorter,” he says.

And the two Xerox Color 1000s are a big step up from the older toner devices they replaced. The fifth color capabilities on one of them are especially impressive to Rosado.

“It has the capability to do spot color right on a given piece,” he says. “So if you select images, it will take all the images and put the varnish right on [them]. You don’t have to create a mask in prepress. It just does it automatically for you.” He hopes Xerox will come out with an invisible ink option for the fifth color unit, which he will find many uses for.

In the meantime, the NYPD Printing Section will continue to produce the high-quality, on demand, secure printing needed to help the NYPD better serve the city of New York.

The INg Conference Showed How Nothing Beats Face-to-Face Meetings
END_OF_DOCUMENT_TOKEN_TO_BE_REPLACED
Upcoming Webinars
The “Rolling 20s” Are Here: Are You Ready?