At the tail end of the 1990s, American Fidelity Assurance Co. decided to shut down its in-plant. The offset shop was shuttered, and the employees who wanted to stay with the Oklahoma City company found work in other departments. Just a few years later, however, in 2002, the wisdom of outsourcing was revaluated, and print was brought back in-house.

“They contacted those of us who were holdovers from the old print shop,” says John Rohrer, the manager of AFPress and Development of Digital Services. “They asked for guidance on bringing print back in-house, and that coincidently corresponded with digital color equipment coming into fruition.”

In the years between, Rohrer notes that he spent his time in the document services department, where he was exposed to those digital technologies and their capabilities. While at that time the only jobs being produced were transactional documents, billing, and policies, it nevertheless laid the foundation for the new opportunity he was handed.

The first machine the newly restored in-plant installed was a Xerox DocuColor.

“It was pretty amazing at that time,” recalls Rohrer. “But to get 10,000 color pieces out in a shift was a good day back then. It just goes to show how far we’ve come.”

While the shop has remained with Xerox over the years, it steadily upgraded to larger, faster, and more productive options, including the Xerox iGen 5 platform, which the shop embraced in late 2016. That upgrade was the proverbial cherry on top of a move the in-plant was taking to consolidate into a single location.

Rohrer notes that when the in-plant was first brought back to life, it was housed across several different buildings that spanned a city block. The print operations were located in one building, which was climate controlled to ensure high-quality output, while the bindery and mailing facilities were in another. Not only was that separation inconvenient, the fact that the bindery facility was not climate controlled meant sheets sometimes curled when moved from one environment to another.

“We had to walk to the other end of the block to make changes or corrections,” says Rohrer. “There was significant waste in travel time, and humidity caused a lot of waste in the bindery. We did that for a lot of years. It was interesting.”

Rohrer knew this waste could be eliminated if the two operations were consolidated. So a new building was purchased, and by March 2017, the final move was completed. 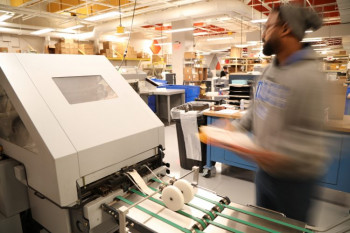 DeAngelo Rodgers folds a run of brochures on the Standard Horizon folder.

“The space was engineered for an operation like ours,” says Rohrer. “It’s absolutely perfect. We just needed to add humidification, and we did some remodeling, but not in a significant way. Where the press sheet enters the press to the loading dock and out the door is about 150 feet now.”

In addition to recovering wasted time, materials waste has drastically decreased as well, going from around 10-15% at the previous facilities, to just 4% today.

“I was fantasizing about what the perfect center would look like for years,” says Rohrer. “So I had a plan already in place when the opportunity came up.” That plan allowed the in-plant to consolidate quickly, with operations such as the mailroom moving first to ensure support for ongoing projects. The pressroom was the last piece to make the jump, migrating over the course of a long weekend.

As part of that move, Rohrer notes, the in-plant acquired a pair of Xerox iGen 5 digital color presses. He’d had his eye on this equipment for years, but the old facility couldn’t support the weight or size requirements.

“We were running the wheels off [the Xerox Color 1000s],” says Rohrer. “Even running three of them, we were working the tails off them. We regularly produce 1.5 million color impressions per month, so we took a chance to move to the iGen, and had two installed in 2016.”

Those two iGen 5s are handling all of the company’s color output today, while several black-and-white Xerox devices are used to produce work such as check payments and transactional documents.

“We still do quite a bit of billing, policies, communication letters, etc.,” says Rohrer. “We also do a lot of training manuals and product books.”

The shop has also started experimenting with making custom one-off boxes and packages for use in projects such as internal incentive packages for the sales teams. 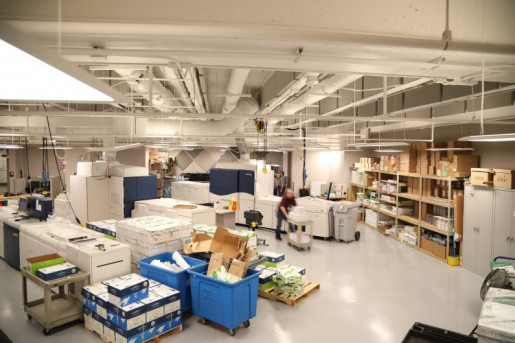 “Those aren’t high-speed quantity,” he says. “They would be for the top sales people, to help motivate them. We send out goodie packages through the year to promote goals, and my idea is we make these beautiful boxes custom for each person, then inside we can include whatever trinkets they want to provide.”

Producing those trinkets or other promo products in-house isn’t on the agenda right now, but Rohrer notes it’s not off the table completely either. Right now, he says, the main focus is on expanding the in-plant services to all of the American Fidelity Assurance affiliates.

“There is a pretty significant amount of affiliates,” Rohrer notes.

He sees opportunity to expand into other areas to support the unique needs each of the affiliates might have. He also offers the in-plant’s services to the employees for a small fee, producing things like wedding or shower invitations, holiday cards, and even photo reproduction for staff who request it. Rohrer notes that while the shop charges the employees a fee for personal printing, it is still less than they would pay to go to an outside source, and provides a small source of extra income for the in-plant, which is otherwise not a profit center for the company, acting instead as a support operation.

The mailing and bindery have also seen upgrades to better allow the in-plant to serve its mission, with abilities such as custom foil and spot coatings added to enhance the printed pieces. On the mailing side, Rohrer notes, within the last year the inserting equipment was all upgraded, and is now state of the art, with features such as cameras, barcode reading, and reporting now integrated into the process.

“Being an insurance company, everything we send out has to be correct,” insists Rohrer. “There is no mixing of personal information, and we have to be very sensitive to that. The old inserting equipment we had for 20 years ... only had the ability to read OMR, the most basic of logic for inserting equipment.”

Now, he says, the shop can read any barcode out there, and is slowly migrating all of its jobs to the more advanced tracking technologies.

“We luckily work for a company that can afford to purchase new equipment,” says Rohrer. “We were able to justify the new equipment purchases just on how it will remediate issues with the mail.”

For Rohrer, however, it’s neither the technology nor the space that is the true secret to his in-plant’s success — it’s the people.

There are currently 18 employees in the in-plant, including Rohrer, and he notes that the average employee has been with him for 12-15 years.

“Once they come on board, they don’t want to leave,” Rohrer says. “The bulk of our team came to us without any prior experience, but had the aptitude and the drive to learn. So we trained them on the job, and that has been hugely successful for us.”

Rohrer also believes in ongoing training, and cross-training, so employees have a chance to learn new skills, and can not only advance within the operation, but can also back each other up when the situation calls for it.

One multi-year initiative going on right now, for example, is a move to get everyone under the same job descriptions, so instead of having a mail center employee and a pressroom employee, for example, they will all be in-plant employees, with the ability to step into any role.

“We are going through cross-training now,” says Rohrer, “and the idea is that any person down there at any time of the day can go to any other area and be productive.”

That will allow him to better shift his staff into areas where he needs the most help, such as for a deadline crunch, or if there is a shortage somewhere.

“People have each other’s backs, and everyone is in it to meet the goal,” he continues. “Our staff is highly devoted to the success of our operation, and I feel extremely blessed to have the team I do working with me here.”

For Rohrer and the rest of his team, re-building the in-plant operation from the ground up wasn’t an easy task, and there were some bumps along the way. But the end result is a robust operation that has seen steady growth and expansion, and which is poised to grow even further in the coming years.

“Lots and lots of signage,” he observes. “It’s used at open enrollment events, expo events, and internal events across the corporation. We do lots of banners and mounted foam board graphics.”

The in-plant also installed a Graphtec contour cutter, further opening up the types of work it can produce for its parent organization.

“We have the ability to do some really cool graphics,” Rohrer reports — applications like logos, stencils, and cut-vinyl lettering for wall graphics, for example. “We have a six-foot wide version of the company logo, printed on vinyl with the individual letters and elements cut out, applied to a wall in the data center. Rather than just one sheet, it’s all individually cut out, and it looks really cool.”

The in-plant also produces lettering for the doors at various satellite offices across the country, which Rohrer notes saves them from needing to pay a painter to put address and contact information in the spaces.