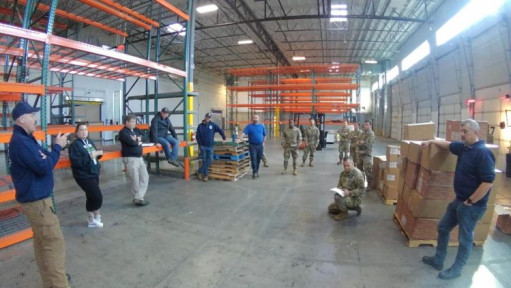 A couple of months ago, the idea of working a shift of 10 days on, one day off, might have seemed a really bad deal to Tim Hendrix, Oregon’s state printer. But as a crucial player in the state’s battle against the COVID-19 pandemic, he’s been more than willing to do his part.

Hendrix was tapped to coordinate the distribution of essential personal protective equipment (PPE) to hospitals, care facilities, and county emergency management facilities around the state — not exactly part of his job description, but a role he’s adapted to quickly. 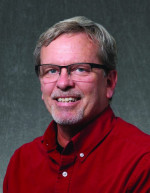 “You respond, as an in-plant, in the way you can and the way you’re trained to, but then sometimes we’re called upon to do other things,” he says. “I think that all in-plants, especially government in-plants, understand that responsibility.”

And indeed he’s not the only state printer who’s been given this responsibility during the pandemic due to their experience delivering mail and printing around their states.

As administrator of Oregon’s 88-employee Publishing & Distribution operation, Hendrix oversees a fleet of 13 vehicles that travel across the state delivering products to agencies, making 550 stops per day. This distribution expertise caught the attention of the Oregon Health Authority in early March, which asked Hendrix to handle the statewide distribution of PPE.

The in-plant cleared out a portion of its paper warehouse to store PPE and put together an online ordering and inventory system to keep track of them. Then Publishing & Distribution started using its shuttles along with UPS shipping to deliver PPE to hospitals and care facilities. Over a three-week period, his staff shipped more than 60 pallets of material — masks, face shields, gloves, gowns, and coveralls. 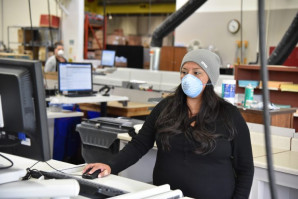 Oregon’s state printing operation has been busier than ever during the pandemic. Here, Desiree Sutterlee prepares to print a production job.

“It’s something we’ve never done before,” Hendrix reveals. “The ability for us to retool in 24 hours and use our own staff to essentially complete this mission, I think, is recognized by leadership.”

When the federal PPE stockpile became available, a larger storage area was needed. Hendrix was asked to prepare a vacant warehouse in Wilsonville, 30 miles northeast. He spent nearly a week getting the IT infrastructure and power ready, and then began taking delivery of the stockpile. The operation has since been turned over to the Oregon National Guard, though he continues to provide oversight.

Print Volumes Are Up

At the same time as all of this is happening, the printing operation has been busier than it’s ever been, Hendrix says. Unemployment claims have gone through the roof, and the in-plant is processing and printing materials and checks for those.

“We’ve seen an exponential growth in those jobs,” he says. 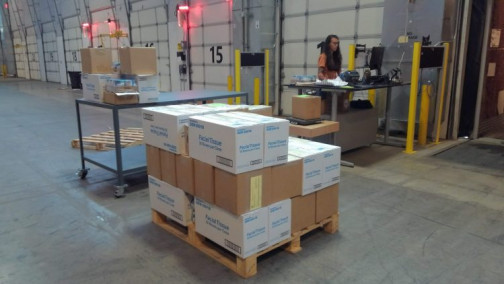 Jobs for the Department of Revenue are still coming in (it is tax season, after all) and state parks have increased their orders of park maps and brochures, in hopeful preparation for summer.

“We’re still fully staffed,” he says. “All of our production staff is still on site, working.”

The secure print area went to 24-hour operation, with staff spread out over the day so fewer people are working together, and yet the facility can still run at full capacity. Rigorous sanitizing procedures are in place. Some staff have worked a week straight, Hendrix says, and others are asking where else they can be deployed to help out.

“Everybody stepped up in an incredible way,” Hendrix praises.

Despite normally getting just-in-time deliveries of paper, Hendrix ordered three month’s worth right before Oregon declared a state of emergency. He thinks the COVID-19 crisis will permanently change the way supplies are ordered.

“I don’t think we’re going to constantly be keeping three month’s supply, but I think just-in-time is no longer going to be the case,” he says.

The pandemic threw a wrench into the in-plant’s equipment upgrade plans. With the end of its equipment contract in sight, Hendrix would normally be looking at new equipment and planning upgrades right now. But this isn’t the time for that, he says. 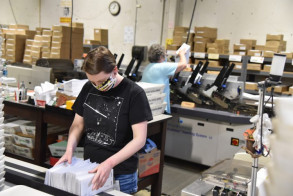 “I have big plans here,” he laments.

As the in-plant responds to the crisis and learns from its mistakes, it is carefully documenting its experiences in preparation for creating a new disaster recovery plan.

“I’m afraid this may not be the last time,” Hendrix says, grimly.

Once the crisis ends, he foresees a possible decrease in printing, as customers assess their depleted funds.

“All states’ budgets are going to be incredibly strained by this,” he observes.

Printing During a Pandemic