Orgill’s Print Services division isn’t your average in-plant. It serves a distribution company based in Collierville, Tenn., near Memphis, that is getting ready to celebrate 175 years in business, servicing hardware stores throughout the United States and Canada. Vernon Goodner manages the print operation, with four additional employees helping serve a vast network of locations and personnel that span the country.

“We’ve got seven U.S. distribution centers,” plus one in Canada, Goodner says, “and up to 350 trucks out delivering products all the time. We service [more than] 6,000 dealers.”

The in-plant is located in a 6,000-sq.-ft. facility in Olive Branch Miss., about five miles from the corporate headquarters. The biggest single product the in-plant produces is a paper catalog, that, while it has experienced changes over the years, continues to be in demand. It goes out every other week in the U.S., and every three to four weeks in Canada. The catalog is sent out in sections, with each one updating a different department’s inventory. There are more than 80,000 SKUs to track and provide updated information on.

“We’re constantly reprinting updated catalogs,” says Goodner. “And it’s regionalized as to what part of the country they’re in, so there are 36 different versions we produce.”

More than 700 subscribers get those regular updates, via what Goodner calls “truck mail,” where the catalogs, instead of being sent as a separate delivery, are included with the regular product deliveries for each customer.

Goodner notes that when the catalogs first started being produced, they were printed in sections on offset presses, and each was up to 500 pages thick. Today, he says, the format has been changed to allow fewer pages and more regionalization. Each one is 250-300 pages, and they are printed digitally on the in-plant’s two Canon VarioPrint 6250s and a Xerox J75.

Moving from offset to digital, Goodner notes, had other benefits as well. “It used to have to be printed, collated, hand-picked, etc., but when we went digital, we were able to complete [i.e., print and bind] the book all at once. It also allows us to get fresher copies out quicker; we don’t keep anything on the shelf anymore.”

Beyond the main catalogs Orgill relies on for keeping its dealer network informed of available products, the in-plant also prints product-specific catalogs that it can customize for each dealer.

“We call them print-on-demand,” Goodner says. “We take orders and sell them in lots of 10, and we’ll put a custom cover on them with their name, address, etc. so retailers can use them in the field as a sales tool.”

Those catalogs might be for things such as maintenance and repair equipment, or farm and ranch tools. They allow dealers to have a more targeted printed piece for the audience each one is servicing.

Wide-format printing is still a relatively small part of Orgill Print Services’ operation, but Goodner sees a good growth opportunity there. The in-plant has two Canon aqueous large-format printers — a 44˝ and a 60˝. The 60˝, Goodner notes, is the “newest” at about six years old, but it’s still going strong. He points out that for his operation, most items printed on the wide-format equipment tend to be signage that is only meant to last 60 to 90 days. Additional purchases in the future, he says, could include a flatbed printer, since right now the shop can’t print signage directly onto rigid substrates, and Goodner could see that opening up additional products and services.

The wide-format equipment today is primarily used to produce pieces such as planogram sets, with signage and information that help retailers display and sell products. 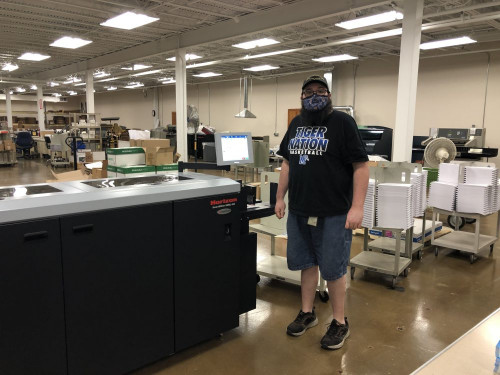 Before COVID, Orgill hosted two live events every year where dealers and vendors came together to see the latest products and place orders. The in-plant produced signage for those events, notes Goodner, including retractable banners. He anticipates that demand returning as live events pick back up.

One area of wide-format printing he is starting to see more demand from is in conversions, where a salesperson is converting part or all of a store’s inventory to Orgill distribution.

“There are teams throughout the country converting stores,” he notes. “It can be anywhere from one bit to a whole store, and I think the numbers might require me to come up with a faster way to print.”

Right now, he notes, finishing is a bit of a bottleneck, so the most likely upgrades to target next will be in that area. But if conversions continue to pick up, finding faster, more economical presses could also be on the agenda.

Future projects could include selling some of the signage and banners the in-plant produces for shows to the dealers for their own displays, and even exploring promotional products the in-plant could produce and sell to dealers.

Today, Goodner says, the shop doesn’t have much of a Web-to-print (W2P) system in place, still relying on everything from emails to phone calls, and even the occasional faxed order or mailed request. However, he says, that is something he hopes to change in the near future. Before COVID impacted the country, he was already starting to explore various W2P options, and getting demos of systems.

“We have around 370 salespeople throughout the country, and we also supply them with everything from business cards to corporate brochures, and they’re constantly calling or emailing wanting this or that, and half the time they don’t even remember what it was. So I want an online ordering system where they can look at a picture of what they want and just hit send,” says Goodner.

One problem is that new employees sometimes come into a position and don’t know what the previous person had ordered, so Goodner and his team have to try to figure it out. They work with the new employee to learn what he or she is trying to do, and what types of pieces they want to support it.

To date, he has looked at several of the popular W2P options on the market, such as PrinterPresence and Print Shop Pro from edu Business Solutions, but hasn’t made any decisions.

“There are a couple that will work,” he reveals, “We just have to get our end ready, and then get something set up. Hopefully this year.”

That said, Goodner notes that his staff’s ability to read between the lines when figuring out what someone actually needs versus what they are trying to order is one of the in-plant’s greatest strengths. 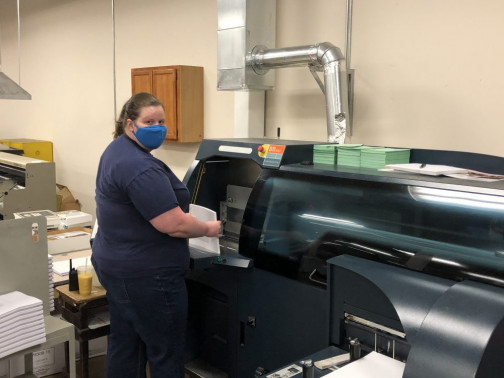 “They think they know what they want, but we have to tell them what they really want,” he says. The in-plant’s knowledge of its own products combined with its deep understanding of Orgill’s business, allows the team to provide a quick response to any request, ensuring all Orgill employees across the country get exactly what they need.

That integration benefits the parent company in other ways as well. Goodner notes that his operation shares a building with another department tasked with reviewing new products and deciding what to carry and how to market it. That team, he notes, often comes over for quick signs and prototypes that they just wouldn’t be able to get quickly enough if the in-plant wasn’t there. Outsourcing, he says, “would take a few days — to get a file created, send it over, print it, and get it back. With our print shop next door, they can just run over and get a quick sign.”

Today, he notes, there isn’t a chargeback system in place, although he sees the in-plant moving to that model in the future, especially as its products and services continue to expand. Goodner notes that right now, he just keeps track of what everyone is spending, and what they’re spending it on, so they are aware of it, but only charges when the in-plant needs to buy a special stock, or have a unique finishing of some sort.

Though Goodner promotes what the in-plant is doing when he meets with other department heads, he hopes to expand that education to the rest of the company, perhaps with a virtual open house tour.

“I could see doing a little open house, showing our capabilities,” he says. “IPMA has some great ideas [for marketing in-plants] that we don’t always take advantage of.”

Orgill Print Services might be an in-plant operation for an older and well-established company, but that hasn’t stopped it from constantly looking for new ways to evolve to better serve the company’s mission. New products, new services, new ways to engage, and more efficient equipment are just a few of the ideas on the horizon. As Orgill continues to serve hardware stores and dealers across North America, its Print Services department stands ready to support those efforts.