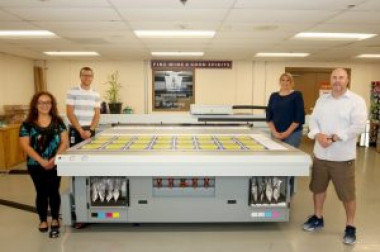 In one of the last sessions of the In-plant Printing and Mailing Association’s Virtual Conference and Vendor Fair, Marcie Carr, director of the Commonwealth of Pennsylvania’s Bureau of Publications, detailed the tremendous success of her in-plant’s sign shop, which has seen revenue growth of nearly 70% since 2017. In 2020, the shop added a Canon Arizona 2280 XT flatbed printer, greatly expanding signage opportunities. State agencies such as the Game Commission, the PA Lottery, and the Bureau of State Parks have increased the amount of signage they are ordering from the in-plant, thanks in part to the ease of ordering signs through the in-plant’s EFI Digital Storefront Web-to-print system.

Between 2019 and 2021, Carr said, signage grew from just over 9,500 signs produced to more than 200,000. Services were expanded to include pop-up displays, banners, 3D and textured signage, and high-end engraved signage. 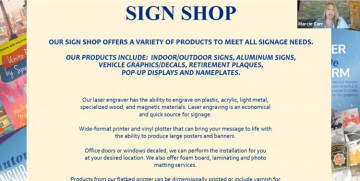 A slide about the in-plant from Marcie Carr's IPMA presentation.

Carr says the sign shop has saved about $1.5 million for state agencies. She has worked to make the ordering process more efficient for agencies by letting each regional office order signage directly from the Bureau of Publications, rather than from the agency’s own central office. This eliminated the need for agencies to store signage and then pay to ship it to regional offices.

“Our goal is to not have them stored and touched twice,” she said.

Because of all the wide-format business it’s getting, the sign shop has added a second shift. When business slowed elsewhere in the in-plant during the pandemic, the sign shop stayed busy.

“The sign shop sustained us over the last year and a half,” Carr said.

It recently completed an order of 7,800 signs for the Pennsylvania Game Commission in less than two weeks on the flatbed printer, which can print on rigid substrates up to 2˝ thick and has a print area of 98x121˝. The flatbed printer can reportedly produce 24 signs in less than six minutes.

Carr predicted the sign shop will see another revenue increase of 24% in 2021.