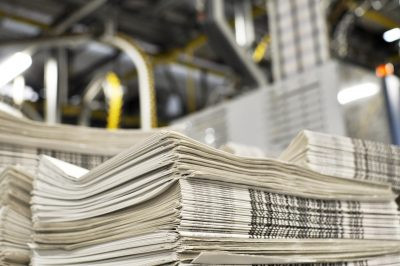 Perhaps no other segment of the printing industry has been disrupted more by the rise of electronic communications than the newspaper printing market, which has been facing a steady decline in the number of print subscribers, a drop in print advertising, and difficulty in establishing paywalls to get consumers to pay for news content online that they can often find on the Internet for free somewhere else.

The latest casualty is the Schuylkill printing plant in Upper Merion Township, Pa., owned by The Inquirer, which prints The Philadelphia Inquirer and the Philadelphia Daily News daily newspapers. The facility also prints area editions of The New York Times, The Wall Street Journal, and Barron's, which are, likewise, being consolidated, as Printing Impressions reported in a recent article about plans by News Corp to close its large printing plant in the Bronx, New York.

According to an article published in The Philadelphia Inquirer, employees were informed Oct. 9 that the company plans to close, and is in negotiations to sell, the sprawling 674,000-sq.-ft. print manufacturing facility as early as the end of the year. About 500 of the 550 union workers employed at the Schuykill printing facility located on a 42-acre site on River Road  — nearly half of The Inquirer's total workforce — will reportedly be laid off.

The printing of the two newspapers will instead be outsourced to a unionized Gannett printing facility located in nearby Cherry Hill, N.J., The Philadelphia Inquirer article revealed. According to Lisa Hughes, publisher and CEO of The Inquirer, Gannett may hire some of the displaced workers, but there are no guarantees, the paper said. Hughes added that the closure will create a net annual reduction of $19.3 million in operating expenses.

The Philadelphia Inquirer article also pointed out that the Gannett Co., which owns 260 newspapers, including USA Today, has closed 23 of its own printing facilities since the beginning of this year.

The Schuykill printing facility cost about $300 million when it was built amidst much fanfare in 1992, with $160 million of that going toward the purchase and installation of Goss Colorliner presses, the newspaper reported. The Philadelphia Inquirer and Daily News were previously printed in downtown Philadelphia, across the street from NAPCO Media's former headquarters on Broad St. The Within the 462,000 sq.-ft. of manufacturing space, only two of the nine press lines are now being used to print The Philadelphia Inquirer and the Daily News, the article indicated.

John Dagle, president of Teamsters Local 628, which represents 300 of the workers among a total of eight bargaining units, told The Philadelphia Inquirer reporter Andrew Maykuth that he was “blindsided” by the closure announcement, noting that he had been informed by company officials that the plan was to sell the property, then lease the printing plant back, and continue the operations there.

"It’s a kick in the gut to over 500 loyal employees and their families,” Dagle was quoted as saying. He added that the majority of the workers employed there are men in the 50s with many years of company service, who will find it very difficult to find similar jobs.

Related story: News Corp to Shift Printing of Publications to Plant in Queens; Will Close Its Print Facility in the Bronx

This timely webinar covers what all shops need to know about making the most of their own opportunities in digital printing.

This timely webinar covers what all shops need to know about making the most of their own opportunities in digital printing.