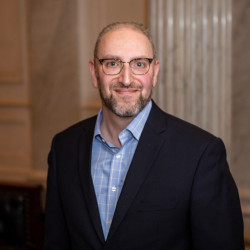 The U.S. Senate has confirmed Hugh Nathanial Halpern as the Government Publishing Office (GPO) director. Halpern will serve as the chief executive officer and lead more than 1,700 employees at the GPO. He is the 28th person to lead GPO since the agency opened its doors for business on March 4, 1861, the same day Abraham Lincoln was inaugurated as the 16th President of the United States.

President Donald Trump nominated Halpern to be GPO director on October 17. Halpern’s confirmation hearing was held November 14 before the Senate Committee on Rules and Administration. The Committee reported his nomination favorably to the full Senate on Nov. 18.

“I am honored and humbled to have been nominated by the President and confirmed by the Senate to lead this historic and vital enterprise,” said Hugh Halpern. “I look forward to working alongside the dedicated men and women of GPO to carry out our mission of Keeping America Informed and meeting the needs of our customers in all three branches of the federal government.”

Prior to coming to the GPO, Halpern held a succession of leadership positions during his 30 years on Capitol Hill.  He served as the director of floor operations for the Speaker of the U.S. House of Representatives.  In that role, Halpern was the highest-ranking floor staffer in the House, and served as Speaker Paul Ryan’s chief advisor on all procedural matters.  He managed the daily floor operations of the House, served as the liaison to all leadership offices, and oversaw legislative interactions between The White House, House, and Senate.  In 2018, he received the John W. McCormack Award of Excellence, the highest award given to a staff member in the House.  The award recognizes a lifetime of bipartisan service to the House.

In addition to his position in the Speaker’s Office, Halpern has more than a decade of experience serving on the senior leadership staff.  He has a proven track record of successfully leading teams to achieve results.

During his career, he served half a dozen different committees in both policy development and procedural roles. During his 11 years on the House Committee on Rules, Halpern served as staff director leading the management and terms of debate on the House floor.  In 2001, he was named general counsel by Chairman Mike Oxley for the newly established House Committee on Financial Services.  During his tenure, the committee provided legislation addressing terrorist financing and money laundering, improving investor confidence in the wake of the Enron and WorldCom scandals, and granting consumers important new tools to fight identity theft.  During the 1990s, Halpern served on the House Committee on Energy and Commerce, where he handled a variety of legislative issues, including automobile safety, insurance, FTC consumer protection, and tobacco regulation.  Halpern began his career in Congress as an intern for Rep. E.G. “Bud” Shuster in 1987.

Halpern served a number of temporary positions during his time on Capitol Hill.  He was the parliamentarian to the First Select Committee on Homeland Security, which created the Department of Homeland Security, general counsel to the Select Committee to investigate the voting irregularities of August 2, 2007, and assistant parliamentarian to the 2008, 2012, and 2016 Republican National Conventions.

A native of Hollidaysburg, Pa., Halpern received bachelor’s and master’s degrees in political science from American University in 1991 and 1992, respectively.  He also received a law degree from George Mason University in 1997. Halpern has been included in the Roll Call list of 50 most powerful Congressional staffers 14 times, and featured in a National Journal profile as one of “the new power players” on Capitol Hill.