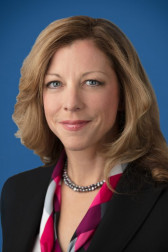 Patricia Collins was appointed deputy director of the GPO.

Patricia “Patty” Collins has been appointed deputy director of the U.S. Government Publishing Office (GPO) by Director Hugh Nathanial Halpern. In this role, Collins will serve in the agency’s second-highest-ranking position as its COO. Collins will oversee GPO’s operations division, which includes plant operations, security and intelligent documents, official journals of government and customer services. These business units are responsible for GPO’s most important products including the U.S. passport, Congressional Record, Federal Register, White House print materials, secure federal credentials, and other congressional and executive branch products and services.

“I am thrilled Patty will be continuing her service to our country as GPO’s Deputy Director,” says Halpern. “Her leadership skills, tenacity and understanding of team operations will be a great asset to GPO. She will help our team to carry out the agency’s historic mission of Keeping American Informed and provide excellent customer service to congress and our federal agency customers.

“I also want to thank John Crawford for his service in the acting deputy director position during the last year,” Halpern continues. “His 54 years of service and institutional knowledge have been invaluable to me since I arrived at GPO in December. I am looking forward to his continued counsel as John returns full-time to leading our plant operations team.”

Prior to joining GPO in May 2020, Collins retired as a colonel following a 24-year career in the U.S. Army. She spent seven of those years within the Joint Special Operations Command. During her military career, Collins was deployed to Iraq and Afghanistan. She provided leadership and organization to those under her command to help them complete their missions successfully. She has experience in a multitude of areas including information technology, knowledge management, strategic leadership and organizational change. A pioneer in her field, Collins was one of a small number of women to serve in Special Operations and was the first woman in the Department of Defense to complete the Military Free-Fall Jumpmaster Course.

In 2006, following her return to Ft. Bragg, N.C., from Iraq, she was hit by a car while riding her bike to work. The injury was so severe that Collins elected to have her leg amputated below the knee. Upon rehabilitation, she continued her military service for nine more years, which included a deployment to Afghanistan. Collins joined other injured veterans for a mountain biking ride in Texas with President George W. Bush.

In 2014, Collins became the CIO for the Joint Force Headquarters National Capital Region/Military District of Washington, where she led a team working with federal and local law enforcement agencies during crisis response exercises and provided command and control support plans for national events such as Presidential inaugurations and state funerals.

Collins retired from active duty in 2015. She then joined the McChrystal Group as a principal consultant where she focused on leadership development and guiding clients through complex challenges in the public and private business sectors.

Collins competed as a triathlete in the 2016 Summer Paralympics in Rio de Janeiro, Brazil. A native of Hackettstown, N.J., Collins holds a master’s degree from the National War College and a bachelor of arts from Rutgers University.