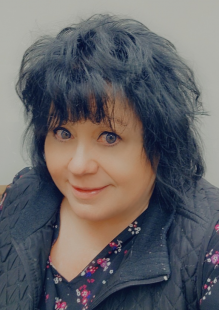 For Chelle Palmer, a career in printing has not only enabled her to explore different technologies and jobs, but it ultimately took her to a new territory outside of her native San Diego. Now settled in Washington as the Richland School District (RSD) Print Shop manager, she wouldn’t have it any other way.

“It’s been a lifetime career that has been fun on top of a good job,” she says.

Though her first jobs included working for a travel agency and selling magazines by phone, Palmer was pursuing her Associate of Arts degree in Graphic Arts at San Diego State University in the late ’70s when she was surprised to see several printing presses in her Graphics Communications class.

With this newfound passion, Palmer started her career with Bowen Enterprises, where she ran miniature presses to produce small labels for hospitals. After that she moved from one print shop to another, utilizing the local industry network and seizing opportunities to learn to operate different types of equipment.

“People all knew each other in the printing industry in San Diego. Everyone moved around until they found a fit,” she says, noting how there was practically a print shop on every corner at the time.

Among the shops where she worked were Neyenesch Printers — the fifth largest printer in California at the time, says Palmer, noted for producing the San Diego Padres’ baseball cards — AlphaGraphics, Minuteman Press, and the printing department for Handyman Home Improvement Centers, owned by Edison Brothers Stores. When Edison went out of business, Palmer found an opportunity as part of the University of California Printing Services night crew, through which she had the opportunity to run a large Heidelberg perfector. Though it was a brief probationary stint, she says, “it felt like a big impact because it was such cool, big equipment I was able to learn; it was fun.”

Into the Pacific Northwest

In 1993, Palmer found herself in Portland, Ore. — where she had nearby family — working in printing sales and doing graphics for a small print shop. She was planning to return to San Diego when a friend informed her of the open RSD Print Shop manager job in Richland, Wash. In addition to being unfamiliar with the area, she would be stepping into a position that had been open for four months.

Palmer, however, was up for the challenge. She accepted the job and immediately began tackling the “heaps” of work that had been accumulating from the schools — using only the one copier and one press the shop had at the time.

“There was no one really to train me,” she says. “I dug around, and in a file cabinet, I found a stack of jobs. I took all the jobs out, organized everything, and really farmed it out to get it done.”

With her commercial printing background, Palmer says she had to adjust to the type of work needed by the district.

“Ninety percent of what you do is classroom work that they use one time and throw away,” she says. “I had to really mentally adjust to the fact that everything’s not going to look like a brand-new book … It’s just fast-and-dirty printing.”

Eventually, Palmer was able to hire a half-day employee. As technology improved and they were able to work faster, the shop’s workload increased.

“I had heard it used to take six weeks to get a job turned around. We were doing it in a day or two, so then our workload started getting bigger,” notes Palmer. “We just kind of slowly expanded and added machines.”

Today, the in-plant uses five Canon varioPRINT 130 production printers and a Canon imageRUNNER Advance DX 4745i multifunction printer. The biggest game-changer in the shop, however, was the addition of Rochester Software Associates’ QDirect.SCAN system 15 years ago, contends Palmer. This revolutionized how much work the in-plant could complete in one day, as it ran up to 200,000 copies — the bulk being 8.5x11˝ packets — using only five devices and two staff members. RSA’s WebCRD solution has also been especially helpful during COVID-19 for allowing teachers to place orders without access to school buildings to scan paper documents.

Despite the disruption of the pandemic, the RSD Print Shop has remained busy printing student packets that have been distributed with free lunches. The shop also ensured special education students received materials at home. During the pandemic, the in-plant’s copier contract ended, and Palmer had the complicated task of choosing a new vendor and new equipment virtually. But she took it all in stride and got the machines installed without a hitch.

With all she has accomplished in nearly 27 years growing RSD’s Print Shop, Palmer is also quick to credit her now three-person team, whose members are constantly thinking of innovative ideas and ways to improve the in-plant, from its organization and offerings, to how its website is servicing different departments. Most importantly, she says, she and her team have a strong dynamic, letting each other know if they are sick and can’t come in, or assisting each other with tasks. This has helped Palmer navigate the challenge of sometimes-unpredictable schedules due to COVID-19 with a small team.

“I talk to them a lot, especially when I get a new employee, about how important it is to me to have a good atmosphere [in which] everyone gets along … That nobody’s taking advantage of any one position,” she says, noting that it’s crucial to have an open conversation.

More Yet to Accomplish

Palmer says she has also participated in a worksite learning program for kids who are possibly on the autism spectrum and aging out of the school system. And she still has more she wants to accomplish for the shop and team before she retires. This includes designing a new, larger print shop that would be part of a new support service center housing several district departments. Unfortunately, these plans were halted by the pandemic.

“I’ve spent a big portion of my life here, so I don’t want to leave it in shambles and say ‘Figure out your shop, there you go.’ I’m hoping that they’re going to be able to get that whole thing rolling so that I can help set that up before I’m gone,” she says.

Palmer would also like to acquire machines that would advance the shop’s wide-format capabilities.

“I think we could do a lot of creative, fun things that the schools would love, and it would be so much more cost effective if we can do it here in the shop,” she says. But Palmer, who regularly attends the In-plant Printing and Mailing Association’s annual conference and received its inaugural Print Innovation award in 2013, also has big plans post-retirement. While she’s very active in her church, she wants to resume learning how to play the cello, which she started doing through online videos and with local connections.

The other big passions in Palmer’s life are horses and entertaining. Having had horses since she was 14, she lost her most recent horse a couple years ago, and is beginning to think about getting another. In retirement, she hopes to have the property she needs to have animals and to potentially pursue hosting small events, such as boutique weddings. Until then, she continues to enjoy a job that is ever-evolving and allows her to collaborate with different individuals in the school district, helping them explore ideas to achieve their unique visions.

“I enjoy the interaction with people ... and doing something creative,” she says. “Every day you come in, you have different jobs to produce and different issues to take care of. I really like that, and I do much better in that atmosphere than to come in and do the same thing every day."